A Christmas Carol with the People Inside 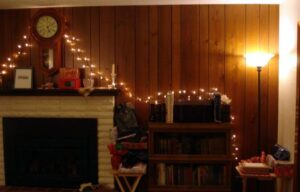 A Christmas Carol, 2020. The lone string of lights at Chez Matley. Festive!

If you’ve known me for 40+ years, you know that I directed a production of A Christmas Carol in 1980. I wrote the script and designed a minimalist, ensemble-based production with most actors double-cast (in English: playing more than one role). Given the time of year and the then not-so-many choices of holiday entertainment in Port Townsend, WA, every performance sold out, even the “pickup” rehearsal between weekends. Better still, Key City Players collected two pickup truck loads of non-perishable items for the local food bank as part of admission.

I short, it was a whopping success. As an impressionable 21-year-old, the experience left me with an enduring fondness of Dickens’s Christmas classic.

I would have loved to be in that production!

If someone in the Port Townsend community theater world had made the show happen 7 years earlier, you doubtless would have been, Lily. If you haven’t visited this blog since June, 2019, Lily is my inner 14-year-old. She intends to become an actress.

This year A Christmas Carol has surfaced in my mind in a new (and perhaps sacrilegious) way. But what the heck, we’ve been short on entertainment in 2020 so I’m going for it! The new twist has to do with two very important men in my life, and their timing in regard to life and death.

If you’re not familiar with A Christmas Carol, it’s a story of redemption. Scrooge, a hard-hearted miser, is scared witless by a series of Ghosts into becoming a kind and philanthropic human being. I know what you’re thinking: where are those Ghosts now, when we really need them? But this is about theater, so please suspend your disbelief and enter the World of the Story, with a few variations. . .

Is this going to be weird?

Very likely, 9. (Even those of you tuning in late understand that 9 is my inner 9-year-old, right?)

So, who are these very important men? First, in order of appearance in our play, is my late husband, Bruce Matley. Bruce, for many years a professional actor, will be cast as Scrooge’s partner, Jacob Marley. Why? For one thing, Bruce could wail up a storm if the part called for it, and he loved playing character roles. Casting myself as Scrooge, it makes sense that he, in real life my music performing partner for a decade-plus, is cast as Scooge’s partner. Also, he died on almost exactly the same day as Jacob Marley: five minutes to midnight on December 23, 2018. Marley died on Christmas Eve, 7 years to the day when Dickens’s story begins.

I’ve been thinking about Bruce’s death a lot the past several days. It was a remarkably quick and very painful timeline, twelve days from diagnosis to falling to pancreatic cancer. He died at home, after a week of home hospice. The people from the funeral home came for him in the wee hours of Christmas Eve morning. Who better to begin the 2020 Christmas-at-home haunt?

Given some fiddling with exact dates (author’s privilege), let’s say Bruce did show up Christmas Eve night, rattling his chains and money boxes and performing incredible vocal histrionics loud enough to wake the neighbors. What warning would he give me? It shouldn’t be about opening my heart to Christmas, because here’s the deal: though Bruce disliked Christmas almost as much as Jacob Marley, it’s a time of year that I enjoy. Even in 2020 when options are pretty limited.

Bruce/Marley: (Slowly ascending from the basement, rusty chains and money boxes clanking on the stairs) Waaaa! Ohhhhhh! I’m warning you, Susie, you’d better straighten up and embrace the Christmas season, or else!

Susan/Scrooge: Okay, honey. So I guess doing 24 days of charitable, seasonal and self-care activities for Advent Bowl doesn’t quite cut it? And the catnip mice I made for the kitties, the special though remote meals I’ve planned and the Zooms I’m joining? And the cards- -I sent the whole box this year. I’ll try harder next year, when I’m actually permitted to leave the house. Oh, and honey, could you leave the chains in the basement next time? They’re getting rust on the carpet.

Bruce/Marley: Whaaa! Ohhhhhh!  Don’t change the subject. I hate it when you do that. If you’re not going to take me seriously, I’m going to send Your Dad! 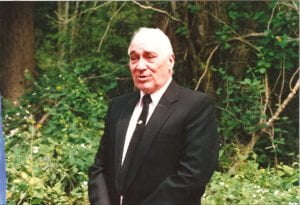 A Christmas Carol 2020: Glenn Abraham as The Ghost of Christmas Past!

Dad was born December 24, 1924, so I think a lot about him at this time of year, too (his last Earthly Christmas was 1993). On Christmas Eve there was always a big party at Grandma Gretchen’s house (his Mom’s place, where he and his sisters grew up). It was torture when my sister, cousins and I were little kids, having to wait through dinner and Dad’s birthday cake and Dad’s birthday presents before we could attack the piles of gifts under Gram’s tree.

(The clock strikes one. Enter Dad, the Ghost of Christmas Past.)

Ghost of Christmas Past: Get out of bed, Susie, it’s time to go!

Past: I am the Ghost of Christmas Past. No more questions. We have much to do.

(Scrooge’s bedroom dissolves into a kitchen from the 1960s. Past shows Scrooge, as a child, how to make the family fudge recipe.)

Past: (Methodically drips boiled syrup from a spoon into a glass of cold water) Boil it until it reaches the “soft ball” stage. See? Now, make some for your grandparents. If you make a batch for your mother don’t over-beat it, she likes hers creamy. I like mine crumbly, and put in some peanut butter.

(Kitchen dissolves into St. Paul’s Episcopal Church, Port Townsend, WA. Scrooge and her Sister have accompanied Dad- -uh, the Ghost of Christmas Past- -to midnight mass. The tiny church is packed, rafters shaking with one hundred voices raised in song.)

(Church dissolves into Scrooge’s living room, blazing with strings of lights that she didn’t put there. A pile of presents wiggles and barks)

Past: My time on Earth is done. Bring on the dog! 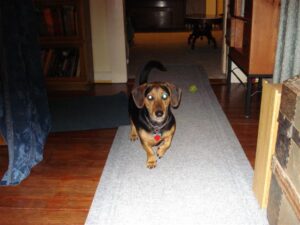 A Christmas Carol 2020: Doc Holliday and The Ghost of Christmas Present!

(Past fades; a pile of gifts explodes under the momentum of a leaping beagle-dachshund mix who had burrowed underneath.)

(Subtitle: I am the Ghost of Christmas Present! Come here and throw the ball, Mom!)

Present: (in subtitle) Humans aren’t the only ones who can be ghosts, you know. Time to open presents!

(Present falls to his side and rolls around in complete bliss in the near-confetti. Enter a rickety grey tabby cat with a white bib. She points an arthritic paw at dog in the paper; dog fades.) 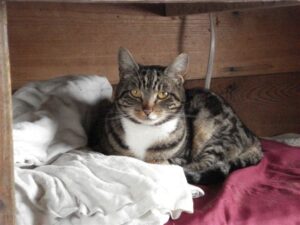 A Christmas Carol, 2020. Grizelda Matley as The Ghost of Christmas Future!

Cat: (By telepathy, under her breath) Just like a damn dog. (In full telepathic voice) I am the Ghost of Christmas Future!

Future: (telepathic) Yes, if you don’t screw up. (Sweeps her paw around the room, pausing three times to point out two tuxedo cats and a plump tiger tabby with bobcat features) Boy cats, every single one of them. Stinky boys! They fight and they spray and they make a mess with their food.

Scrooge: Well, you used to fight, too, Griz.

Future: (telepathic, while imperiously grooming) That’s irrelevant. You alone can avoid a grim future. Next time, get girl cats.

Wow, that was even weirder that I thought it would be! I liked the part about making fudge with Dad, though, just like I remember it.

I sure miss Doc and Grizzy.

Me too, Lily. Our first Christmas without them.

But what you were saying earlier, about A Christmas Carol being a story of redemption. What changed for Scrooge in this version?

Good question. I’d have to say the moral is more implied than stated. Here’s what I wrote in my journal this morning:

“Sometimes it helps to embrace the pain and loneliness, to ride along with it saying ‘I am bigger than you.’ ”

I still don’t get it?

Like lots of people, Christmas is a time when I really miss those who are gone- -Dad for a long time now, Bruce two years ago, Doc and Grizzy in 2020. So I’m honoring them in this weird way to turn my sadness into laughter.

It’s 6:26 AM, December 25, 2020. Later I’ll be Zooming with family for brunch and gifts, living out this unusual holiday season with the materials at hand. And with love.

Wishing you all a Happy Holiday Season however you celebrate or choose not to celebrate, peace with your losses and joy with your gains.