A Matter of Security 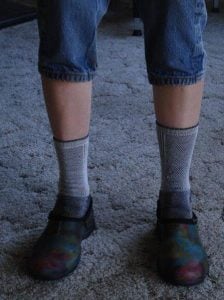 What does this have to do with security? You’d be surprised. . .

A couple of weeks ago, a friend of mine was complaining about a security checkpoint he had to pass through on his way into Disneyland. Armed security guards were on the scene and people’s bags were being screened at tables set up in front of the entrance. His first complaint was the inconvenience of it all, and, it being an election year, he endeavored to tie this alleged increased security to the shortcomings of the political party he does not favor.

The last time I visited Disneyland was February, 2006. Though a different administration was in the White House at that time, I did not think to blame them for the fact that my bag and coat were examined by a security worker, nor for the fact of armed security guards at the check point. Wow, what an opportunity I missed! Maybe I had a premonition that I would face a much more difficult gauntlet than theme park security procedures or TSA screening at the airport. Maybe I understood 10 years in advance that one day I would face the rigors of being admitted to the testing room for the GRE.

Wikipedia informs us that the Graduate Record Examination (GRE) is a standardized test that is an admissions requirement for most Graduate Schools in the United States. On October 17, at the University of Idaho, Moscow, it was my turn to tax my wits with three hours and forty-five minutes of analytical writing, and questions in verbal and quantitative reasoning. I’d studied hard for several weeks and had spent some blood-curdling moments freaking out about stringent administrative requirements on test day. Here’s how it started*:

You will be required to write and sign a confidentiality statement at the test center. If you do not complete and sign the statement, you cannot test and your test fees will not be refunded.

After I wrote out and signed the statement, it was collected (along with my driver’s license) by a proctor. There were five or six other test-takers doing the same. One by one we were assigned lockers to secure our personal belongings- –all our personal belongings, including Kleenex (if you needed one, they provided it once you’d cleared security). One by one we signed in, were told to use exactly the signature that appeared on our driver’s license or other ID and enter the time from their official clock. Each of us had a digital photo taken by a proctor, which, I later learned, appeared on the computer screen at our individual computer stations as visual proof of identity when a proctor logged us in.

Test-related information written on clothing, ID documents or on any parts of the body is prohibited.

To check for departures from this requirement, we were told to push up our sleeves and pull up our pant legs. Nope, no crib notes in the socks. They were also rightly concerned about digital and electronic aids being smuggled into the testing area, to the degree that we were not even allowed to bring in our own Number 2 pencils. After being subjected to scrutiny by a metal detector wand, we were issued two sharpened pencils apiece from a specific, controlled jar and four sheets of pink scratch paper (the proctors made us count the exact number of sheets in front of them as an added control). Along these lines, jewelry of any kind, except for wedding and engagement rings, was forbidden in the testing area. And, by the way,

You may be required to remove your eyeglasses for close visual inspection. The inspection will take a few seconds and will be done at check-in and upon return from breaks.

After two hours of testing we were allowed a ten-minute break. Thank goodness, because, at 57, I was more concerned about the capacity of my bladder in a standardized testing situation than the capacity of my brain. On departure and return from the testing area the security procedures were repeated. Sign out, sign in, show your wrists, your ankles, stand with arms outstretched for a scan with the wand and turn around to have this repeated on your backside.

Are you laughing yet? I certainly was, and the proctors, two young women who were business-like and personable throughout, might have cracked sympathetic smiles.

When I’d finished the test I dutifully handed in my pencils and scratch paper (yes, I had to count the four and only four pink pages in front of a proctor). It was a heady feeling to have survived, and I thought I’d done pretty well. My husband was in the waiting area. By the time we got in the car and headed home, I was giddy with relief.

So. I survived the test and I survived an almost comic security protocol without loss of patience, temper or my sense of humor. My GRE scores arrived last week (ranging from really good to acceptable) and I’m in the thick of completing graduate school applications. Overall, it’s been a good experience. and I’m newly confident that I can meet the hoped-for challenge of graduate school.

Who knows, I may even be tough enough to go to Disneyland.