Adam West Day and the People Inside

If you live in Walla Walla, or even if you don’t and are incredibly “in the know,” you know that on the third weekend of September we celebrate a favorite native son, Adam West.

It must have been if you, Lily, my somewhat cynical fourteen-year-old inner self, give it so many exclamation points!

If you live under a rock and have no social life you may not know that actor Adam West, born William West Anderson (who, sadly, passed away in 2017), starred in the runaway hit TV series Batman. His 2019 celebration day was so much fun I wrote about it then. You can find it here:

Due to the pandemic Adam West Day was cancelled in 2020, though a version of the bat signal was illuminated in the Marcus Whitman Hotel tower that particular Saturday night. I was one of three people whooping and hollering in the hotel parking lot.

This year Adam West Day, the fourth annual, returned, following CDC guidelines. And this year, I took on a new role for the event. Instead of spending the day soaking it all up like a deliriously happy tourist, or playing the part of Bat-Signal fangirl in the parking lot, I volunteered to help.

You even went to one of those things you don’t like.

That’s correct, 9, I went to (gasp!) a meeting. Just one, efficiently organized by event founder and Super Boss, Jonathan Grant. He does the lion’s share of the work, developing and overseeing an event-filled schedule: opening ceremony, live music, the Batmobile, the Batcycle, costume contest, panel discussions, lectures on the Batman series/the TV industry at that time, documentaries, interviews, and my personal favorite, the shining of the Bat-Signal on the Marcus Whitman Hotel Tower!

The crowning moment of Adam West Day: the shining of the Bat-Signal on the Marcus Whitman Hotel tower!

Jonathan also arranges for the family of Adam West to attend the celebration- -wife, kids, grand kids, nieces and nephews. Many of them participate in the day’s events. One in particular deserves extra praise: James E. Tooley, married to West daughter Nina. He produced and directed the 2013 documentary Starring Adam West. 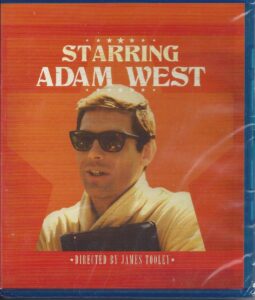 In the 2019 blog I noted that Adam West Day is a universally happy event. You can feel the love, in spite of different generations, and polarized political opinions, and all the other stuff that gets in the way, simply because everyone there is a Batman fan. All these people were touched in a positive way by the Caped Crusader, the good old-fashioned one in the itchy tights c. 1966. The documentary captures the essence of this love of the show, and the fans’ love of Adam West.

The frame of the documentary is the quest to get Adam a star on the Hollywood Walk of Fame. Unbelievably, applications for this honor had been turned down many times. That story in itself is interesting.

Poignancy enters when it’s revealed just how much being typecast as Batman hampered Adam West’s life and career. There’s plenty of evidence from all kinds of shows that testify to his acting skill. He was even considered for the first “replacement” James Bond after Sean Connery (West declined the opportunity, believing a British actor should play the role). Hollywood refused to forgive him for being a superhero success.

The unforgettable campy tone of the Batman TV series was deliberate, a choice made, and a good, entertaining one, too. The show delighted me, six years old when the series premiered, and totally cracked up my dad, a 41-year-old lawyer with a background in community theatre.

Batman ended in 1969. As decades passed Adam West struggled to support his blended family of six children, taking whatever work he could get- -appearing as Batman at car shows, performing stupidly dangerous daredevil stunts such as, literally, being shot out of a cannon. Batman, to him, felt like a curse. It was not until his agent persuaded him to appear at Comic-Cons (as himself, not as the character) that he understood how much people still loved Batman, and loved him.

Adam West must have been the last person on earth to love and embrace Batman. Once he did, his agent mined contacts with late night talk show hosts who remembered the TV show as kids. West got lots of those gigs. Studios started calling with offers for TV and movies. Eventually he landed a long-term voice acting role as Mayor Adam West, a send up of his own personae, on adult animated series The Family Guy.

At heart, the Adam West story is a story of transformation, redemption, and love.

What more could a superhero give?