Advent and the Person Inside 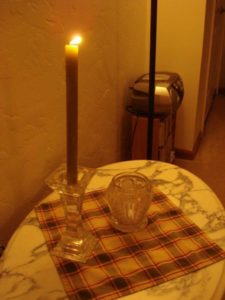 As in “Advent Calendar”?

Exactly, Lily (she’s my inner fourteen-year-old). Lily, since I reclaimed her last July, has been excited about lots of things she hasn’t seen or done since 1974. Like Christmas. Me, not so much. It’s not that I’m a Grinch by nature (though I can do a fair impersonation of said person). My dread of the year-end holidays has more to do with the way I spent them last year. I’m experiencing quite a bit of anniversary anxiety, my thoughts turning far too often to Bruce’s final illness and death on December 23, 2018.

Throughout the year I’ve been figuring out a lot of things- -how to restring a weed eater, etc.- -as well as learning how to cope with grief. One of the best tools I’ve discovered for dealing with grief is directing my attention outward instead of dwelling on unhappy memories that sometimes bring me to a mental and emotional standstill. It’s not denial (she denied); the grief will be here, no matter what I’m thinking or doing. It’s more about remembering that there’s more going on in the world than loss.

Hence, my holiday self-rescue activity. I call it Advent Bowl.

As in going to the bowling alley the four Sundays before Christmas?

Hmmm. Maybe next year, Lily, and I think there’s a bowling alley or two in Walla Walla. This year’s Advent Bowl doesn’t require special shoes (except maybe on one TBA day). This year, Advent Bowl starts at home, and it’s in some ways like the Advent Calendar you mentioned.

Remember Advent Calendars? A colorful, glitter-encrusted holiday scene printed on card stock with two dozen doors numbered 1 through 24? You open a door a day, from smallest number to largest, starting December 1. Behind each door is a surprise picture, a scene or object related to Christmas. I’ve seen a homemade Advent Calendar made from two egg cartons, with a piece of chocolate tucked away in each depression where eggs used to go.

Good. I hoped this would involve chocolate.

Actually, Lily, I don’t think it does. But it does include taking a friend to lunch, making a charitable contribution, and getting dressed up just because (that’s where the special shoes might come in). It is twenty-four things that I don’t do very often, fun and not-too-hard things that can be accomplished in one day.

Not at all, Lily. Here’s how it works:

Before December starts, write down a list of twenty-four festive activities. The choice is up to you. Here’s the start of my list:

I dropped folded slips of paper with these and nineteen other activities into a short, stout crystal vase that belonged to Great-Grandma Eugenia Eaton Abraham. Every morning, just before coffee, I light a candle and draw one item from the vase (which I’ve called a “bowl” for naming convention purposes). On the slip is my Advent Bowl task for the day, to be completed before the end of the day. Some are simpler than others- -it takes a lot longer to make sugar cookie ornaments than to take a bubble bath. But that’s part of the charm: I have to fit that one extra, non-routine element into my day.

What happens if you don’t get your Advent Bowl task done on time?

I’m trying not to think about that, Lily, and, so far, so good. A quick recap of the first three days: 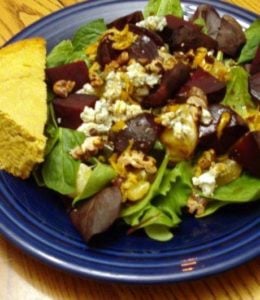 Now this is festive! Orange, blue cheese and beet salad on the first day of Advent Bowl.

My first thought was Noooooooo! It’s not that I hate cooking (that much), but I was hosting the final event of Bruce’s Memorial Trifecta that afternoon and didn’t have much time available. Advent Bowl forced me to set aside my pre-event stress and look up a recipe that I could make when I got home. What ingredients did I have that needed to be used? An overripe orange and some blue cheese left over from Thanksgiving. I queried “orange and blue cheese” on the internet and found an easy-ish recipe for orange, blue cheese and beet salad on a bed of field greens. I could pick up the beets and greens when I stopped at Albertson’s for the coffee traveler I’d ordered for Bruce’s event. There would be time to make it for dinner that evening when I got home. 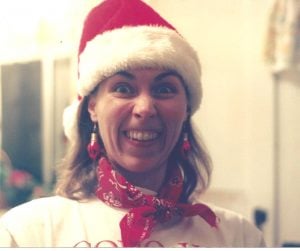 Advent Bowl day two, because everybody has a little Grinch inside. . .

Wow, you really are kind of a Grinch look-alike!

Quiet, Lily. Tuesday, December 3, was a potential challenge. Why did I draw “18. Share a good wine” on a week day? But Advent Bowl upsets the natural order of things. I had some errands to run that day, and a pair of reading glasses that a friend had left behind at Bruce’s gathering to drop off in the afternoon. My plan: when I got home from all that, I’d start calling a list of local friends until I found someone who would agree to share a bottle from my “good” wine rack.

A feature of Advent Bowl: keep your eyes peeled for serendipity! Not only did the friend who’d left his glasses behind invite me in to visit with he and his family, he also opened a bottle of Chateau Ste. Michelle Brut so we could all toast Bruce one more time! The wine was good indeed, as well as shared, and it wasn’t even my wine!

Double score indeed, Lily! All I had to do was say Yes.

Even though December’s barely started there have been challenges to address. Yesterday, it was one year since Bruce’s biopsy, also since his last full meal. The day before that, my senior kitty, Grizelda, was diagnosed with renal failure, prognosis “poor to guarded.” It’s not fair, but it’s life. My job, as I became acutely aware at this time last year, is to deal with what life gives me and make the most of what I’ve been given. Grizzy started a special kidney health diet yesterday, a new kind of low-protein canned food that she will actually eat, and she was very tolerant of her first in-home round of subcutaneous hydration yesterday morning. My goal, to improve her condition and buy her some quality time, is, I believe, my best option.

It’s also my job to remember that life has joy as well as sorrow. My somewhat silly invention, Advent Bowl, teaches me that every day.

You’re sure there’s no chocolate in the Advent Bowl?

Not absolutely sure, Lily, but there is one slip that says “Buy yourself a cookie at John’s Wheatland Bakery.” When we draw that one, I’ll let you pick.