Aggression and the People Inside

Have you ever been somewhere in public, in a peaceful place that’s supposed to be for everyone’s use and enjoyment, and witness an unbelievable act of aggression? 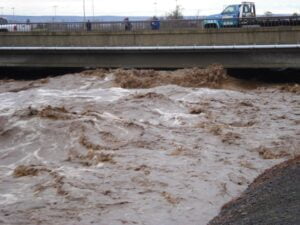 Mill Creek near Tausick Way, during the flood of February 7, 2020. Though the creek flow is much lighter in summer, the aggression I observed there this week looked a lot more like this!

Like when we were out Trick-or-Treating and those mean high school boys kicked a hole in David’s treat bag?

Kind of like that, 9. Two days ago I witnessed something even worse. Remember how those high school boys were laughing?

Yes, and I’m guessing they were drunk, too.

Good guess, Lily. I don’t think the aggression I witnessed this Wednesday morning was caused by alcohol, but the person involved might have had something else wrong with him. Like mental illness or a bad case of self-righteous narcissism poisoning.

It happened around 9:30 AM. I was walking a path along Mill Creek, the stretch that loops from Tausick Way* to Rooks Park** and back. The most exciting thing I’d seen along this path previously was last week, when a flock of 18 pelicans were rafted up together by a bridge.

It was a typical summertime too-hot-for-that-time-of-morning Wednesday, a light sprinkling of walkers, dog walkers and bicyclists sharing the path. Shortly after I’d started I heard a female voice coming from behind.

“To your left,” she said before passing me on her bike. This is a standard courtesy in the cycling world, something I’d heard about from a trio of dinner companions the night before. Nice of her, I thought. When you’re on foot, the whoosh of a passing bicyclist can be startling and it’s made me jump more than once.

No such courtesy came from the next cyclist, who bombed up at racing speed. I did jump that time. He sped past, hunched over his handlebars, absorbed by whatever he was trying to achieve. He vanished around a curve- -there are quite a few of these early in the path. Seconds later, I heard a male voice ahead, not only yelling, but screaming!

I rounded the bend and there he was, halted in place, legs straddling his bike and arms waving wildly as he screamed at two women and four little kids astride their tiny, colorful bikes with training wheels.

One of the women was trying to talk to him. The kids cowered behind her, their eyes as big as pie plates.

“I WILL NOT BE VERBALLY BULLIED BY YOU KIND OF PEOPLE!” the guy shouted, his arms chopping the air for emphasis. He was a big man, his face red from continuous screaming. Both women were thirtyish, short and round with dark complexions. What kind of people were they supposed to be?

The guy was obviously a self-absorbed jerk, but he was menacing, too. I didn’t hesitate to step between them, hold out my arms like I was trying to stop traffic, and say over and over again in as calm a voice as I could manage “Everybody calm down.”

I don’t think the guy even registered that I was there. He kept screaming, and the woman kept trying to say something like “You really shouldn’t be yelling like this in front of little kids.” Her volume was normal and her voice was calm. She looked fearless. I was scared down to my ASICS trail running shoes but I couldn’t let this human powder keg spew his verbal abuse out into the world unchecked.

Fortunately, a ranger stationed at Mill Creek saw what was going on and dashed to the scene. The ranger intercepted the bike guy who had just turned away from the women and kids and was poised to storm off. The ranger, smile on his face, his voice friendly and calm, started talking to the guy. I fired up my ASICS and left him to it, continuing my walk at a speed of 6.0 mph, heart rate 142. I don’t usually take my iPhone when I walk, but I’d wanted it that day in case I saw the flock of pelicans again (I didn’t). It helped to dial a friend and tell him the whole story, to hear him ask if I was okay.

I finished the walk without incident, though the aggressive cyclist did pass me on my return. He wasn’t raging anymore, but given the circumstances I’d thought maybe the ranger would have asked him to leave. Like our first encounter, the cyclist gave no sign that he knew I was there. Maybe that’s because I was TO THE RIGHT, following THE RULES.

Sometimes it’s hard to think of aggressive people with compassion. Clearly there was something wrong with this guy in addition to being a horse’s ass. Maybe he was off his meds. Maybe he got scared to death, nearly running over a bunch of little kids. There is no way of knowing what will trigger people in a way that sends them into the emotional stratosphere.

I am so glad you left us at home.

Not me! I would have bit his leg!

We all have our way of dealing with this kind of crisis. In retrospect, I’m glad that I stepped in (though I’m not sure if what I did had any affect) and am relieved I got away with only a case of the jitters.

But now I wonder, is this episode really about something bigger, something that’s becoming more and more of a problem in our society? In recent years, violence in public behavior has become normalized, even encouraged by some influential public figures who only care about their own sensation-driven media exposure. As a result, more and more people feel entitled to scream and yell, to bully and even kill when things don’t go their way. This kind of self-entitled aggression is just flat wrong.

It will not go away unless we start saying, in public and out loud, that it’s wrong.