An American Buddhist in Prescott 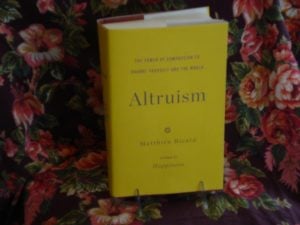 Resource for an American Buddhist in Prescott

Bet you didn’t know I was an American Buddhist in Prescott, WA. There’s a good reason for that. I’m not. Not yet, anyway. I’m working on it, though. Here’s the story.

A couple of months ago, heartsick and frustrated by the state of the world in general and America in particular, I sent a plea to the Universe to show me what I could do to make it better. Since July I’d been participating in the weekly One Minute group wave of positive energy (see “One Minute” blog, July 22, 2016 at https://www.susandmatley.com/official-blog/one-minute/ ). That felt like progress but I wanted more. A day or so into my search, I was knocking off half an hour on the Nordic Track and listening to the radio. The answer to my plea came in the form of an interview with Matthieu Ricard.

Maybe you’ve never heard of Matthieu Ricard? I hadn’t either until that day. He is, as it happens, a 70-year-old Buddhist monk, a Frenchman who left a career in cellular genetics to study Buddhism in the Himalayas when he was in his 20s. The interview was an encore presentation, focused on his 2013 publication Altruism. The concept was simple: extend compassion to all, because all are suffering. Extend compassion even to your enemies; they hurt you and others because they are suffering in some way and need to heal.

Cultivating altruism, the selfless desire to ease the suffering of others, sounded like an excellent step in my quest. I found Ricard’s book on the Internet, a plain-looking volume with a saffron-colored cover. Paperback version $11 or so. My husband had asked what I wanted for Christmas; Altruism seemed the perfect gift.

What I assumed would be an easily managed volume, something I could balance on my lap with a cat or two to keep it company, turned out to be an 800+ page hardback as the paperback was out of stock. Suddenly I wondered what have I gotten myself into?

But, this was my answer from the Universe.

Since Christmas, I’ve been faithfully reading a few pages every day. I’ve learned a lot about the nature of altruism, also the history of scientific studies regarding altruism. It’s a remarkable discipline, cultivated through meditation, which can change the way human brains operate and increase the parts of the brain related to happiness, etc.

Altruism is not limited to meditation, of course, but training the brain this way makes us more observant of the world around us, less judgmental of people who are different than we are and more willing to step in to help someone who is suffering.

Where better to try out this concept than on Facebook? Well, there are probably lots of better places, but Facebook was what I had available. Once I’d grasped the concept of selflessly helping someone who was suffering, the opportunity surfaced. A friend had posted about Planned Parenthood, an organization I’ve recently redoubled my efforts to support because of my personal experiences with them (topic for another day). As often happens on Facebook, someone chimed in with lots of nasty barbs directed at anyone who supported Planned Parenthood. It was crazy, ranting stuff: “You go there because you are poor!”, “You have STDs!” and so forth.

My first reaction was anger, but reading Altruism had installed an emotional braking device that made me stop and think. The person who was so nastily ranting had to be suffering in some way. I replied to one of his zingers: “Whatever is causing your suffering, I hope you will heal.” It seemed sanctimonious at first, so I looked inside. No, I sincerely wanted this person to feel better and join happily with the rest of the human race.

In a while he replied. He had injuries from Vietnam that he said the VA took care of for him. Another person entered the thread, pointing out that this should make him better understand people who needed to get their health care services from Planned Parenthood. No, he didn’t, and maybe he never will. But maybe the experience of getting a response that was caring, not angry, nudged him to behave more kindly in some way that I’ll never see. Everyone has their reasons, everyone has their story.

I am now to the section of Altruism that describes meditation techniques. It’s an interesting precipice to stand on. Will I or won’t I commit to enhancing my altruistic instincts with the goal of feeling compassion for all of humanity, even the members I abhor? Am I willing to give up the rush of intense dislike I feel for people who seek to curtail the civil rights of others because of race, disability, religion, gender or sexual preference?

I might be. This doesn’t mean I have to give up supporting causes I believe in, far from it. I’ll be with the Women’s March in Walla Walla, January 21, 2017, 17 miles south, an American-could-be-Buddhist from Prescott. As I march I’ll be thinking of everyone in the world. I hope you will be, too.