An Old Case of Harassment 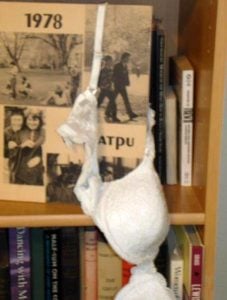 If you lived in a place decades ago and, after all that time has passed, end up living there again, doubtless you will see shadows of your old life impressed over the new.

This happened to me recently in Walla Walla, on a Sunday afternoon. We’d just attended a concert and were driving down Rose Street to the Safeway store in search of red potatoes and seltzer water. I’ve driven down Rose many times since we’ve moved to town, but this time a memory ignited. Maybe it was the low, lazy angle of the sun that carried me back to a day forty years ago, in the spring of 1978.

I was a student at Whitman College, nearing the end of second semester, freshman year. Like all freshmen I was required to live in a dorm and take part in the campus-provided meal plan. The meal plan included everything but Sunday dinner. Whatever the reason for this, it left those of us who lived on campus on our own for that last meal of the weekend. Sometimes a group of us would treat ourselves to a restaurant meal on Main Street. The grocery store, though, was a more common and economical choice.

The Safeway was and still is a few blocks from campus. The late April day was lazily sunny. I walked, alone and absorbed in my thoughts, down Issacs Street to Rose. A sleepy afternoon with few vehicles driving past.

Someone yelled “Hey, bitch!” from a truck window.

I ignored it, because that’s the smartest thing to do, but also, my name was not (and is not) bitch. The truck rolled slowly around a corner and disappeared. I was two a blocks from Safeway. No other pedestrians on the street. I walked as fast as I could but the truck circled the block quickly.

I looked from the corner of my eye. It was someone I’d never seen before, a chunky looking man with a bill cap, a few years older than my eighteen. Should I turn around and go in the other direction? If I did, could I make it back to campus, or some other safe place, before he caught up with me?

It ran through my mind in a second. The next second the slow-driving man yelled “Hey bitch, what’s your bra size?”

Even in my panic I thought what kind a stupid question is that? Especially given my petite upper build.

The truck roared off after this ingenious barb and didn’t return, at least not before I made sanctuary at Safeway. Another girl from campus was there. I didn’t know her very well but when I told her what had happened she was extremely kind and we walked back to Whitman together. This particular girl had grown up in Walla Walla and said the guy was probably some stupid “townie” that had a grudge against college students.

I never saw my verbal assailant again. But who knows? Maybe he still lives in the area and has morphed into a decent person. I’d be interested to know if he’s ever reflected on our shared incident. Does threatening someone make less of an impression than being threatened? I’m guessing the answer to this is yes. I’m also guessing that, if this person still walks the earth, his bra size is a lot bigger than mine.