Astronomy and the People Inside 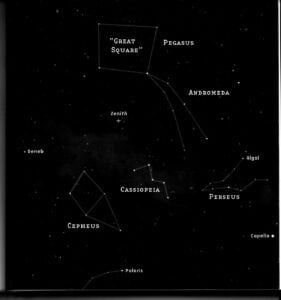 Astronomy: to the north, what we will look for in autumn’s night sky.

Remember a few weeks back when Lily, 9 and I were discussing our at-home plans for the new school year? School was the outcome of creative thinking, applied to my dread of the seasonal contraction of daylight. One thing I like about the fall is the start of the new school year. Conferring with the other two, we agreed to pursue Spanish, Horticulture, Cemetery Iconography and Astronomy to give the new season a positive focus.

Funny, I don’t remember agreeing about this.

Yeah, you just told us what we were going to do.

One of the pitfalls of actively living with my inner fourteen-year-old and my inner nine-year-old: their memories are really good.

Sure, especially when compared to the strange thing that happened last weekend.

Lily’s referring to a freak power outage last Saturday, when one-third of a huge deciduous tree kitty-corner from our house split off from the trunk and fell on the power lines. By the time the broken off chunk of tree settled, the lines were five feet from the ground. The pole serving our house- -and our house only- -was leaning at a forty-five-degree angle. 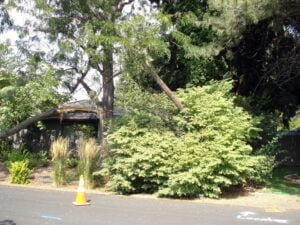 Astronomy couldn’t predict this, but maybe astrology could have: Saturday’s tree and power pole adventure.

When the tree was splitting it sounded like firecrackers going off!

Yes it did, 9. I called the power company right away. They had to unhook our lines to replace the pole. The driveway was choked with five big work trucks for hours.

Then you spent a couple of hours on the phone to arrange repairs with the internet carrier.

I certainly did, Lily. Lots of time on hold. And of course it was a 3-day weekend. They had us up and running again in 24 hours but I’ll admit I felt pretty helpless and isolated, not being able to message friends and family. At least when the electricity came back on I was able to charge the cell phone.

So, Saturday the power goes out, Sunday we finally get the internet back and life is feeling pandemic-era normal until Monday afternoon. That’s when the northeast wind kicked up, big time.

It knocked down half our sunflowers.

Half the corn, too, after we’ve been babying it along all summer.

Don’t I know it! I’m pretty sure I’m the only person in the history of agriculture who’s had to stake corn- -twice. However, Tuesday morning I cleared away the fallen sunflowers and reinforced the corn stalks and we were back on schedule. Including our planned half-hour of Spanish and a half-hour of astronomy reading.

With homework that night.

Right. Our assignment was to look at the eastern sky after sundown and identify three bright stars in three constellations: the star Vega in the constellation Lyra, Deneb in Cygnus and Altair in Aquila.

And we saw them, too!

Yes we did, 9, and we also learned something else.

That astronomy does not mix with cats.

True, Lily. Cats are not ideal companions when it comes to wandering around in the back yard at night, looking at the sky instead of at your feet. If we were making our observations from a tower window and the tower had a lot of heated, catnip-infused cushions against the opposite wall, it might mitigate the tripping hazard. But in our present configuration- –

Succinctly put, 9. However, cats are not what I was thinking about. The other important thing we learned, besides where to find three bright stars in three constellations (and that all cats are ankle-breakers in the dark), is that there’s something to look forward to as the hours of daylight grow short. The earlier it gets dark, the earlier we can step outside and look at the night sky.

The earlier we can wander among the stars.