Babka and Other “B” Words and the People Inside

Last Saturday marked the conclusion of Advent Bowl 2022. In the four years since its invention I’ve learned to choose activities for the daily random draw that are not only interesting but can be completed on that same day. In 2019 I floundered with “Make felt holiday ornaments.” A clever Advent Bowl player would have made sure the components were on hand by November 30 instead of spending 3 days fighting holiday shopping crowds in search of the exact color of felt, the right size of sequin, etc. This year, when my thoughts strayed toward making Chocolate Babka- –

The really yummy stuff we started making on December 23 and finished on Christmas Eve, 9. This year, with a short list of Advent Bowl “fails” jabbing my memory, the activity I created was not to make Chocolate Babka, but gather the ingredients for Chocolate Babka. Success! When there was finally time to do it I dove right in.

Why did it take two days?

Good question, Lily! I settled down to the task late on the afternoon of December 23, only to discover the dough had to be chilled all day or overnight. So that happened, with the help of the mighty standing mixer! It’s been about 10 Christmases since Bruce gave me dough hooks for the Kitchenaid and at last I had a use for them. Here’s an action shot: 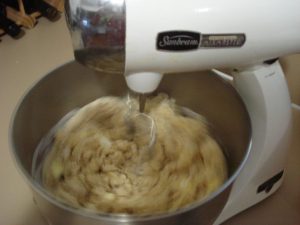 The mixer was especially helpful in incorporating ¾ cup unsalted butter, cubed, into the dry ingredients.

The dough rested in the refrigerator overnight and so did I (but not in the refrigerator). Christmas Eve morning the brioche needed to sit on the counter at room temperature for a while to be workable, but soon enough it was divided into two lumps. Each lump was rolled into a 12 by 16 inch rectangle.

I made the chocolate filling while the dough warmed. On my first try I experienced filling failure!

It was, Lily. I guess I overcooked it. The heavy cream curdled and the butter turned oily and separated from the rest of it.

I thought so, too, 9.  And 7 ounces of bittersweet chocolate went to waste. Fortunately I had enough bits and pieces of other dark chocolate the try it again, this time with happy success.

I spread the filling over the rolled out dough and, with the long edge facing me, rolled it up, flipped it over seam side down and sliced it down the middle. The two long pieces were braided into a loaf, slipped into an oiled, parchment paper lined bread pan and popped into the oven. The kitchen looked like the Cat in the Hat had been there, and maybe he had. . .

Anyway, the Babka tale has a happy ending: 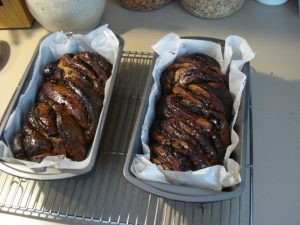 Even I thought it was good, but what about those other “B” words?

Thanks for the reminder, Lily. Let’s start with “buoy.”

Are we going on a boat trip?

Not that kind of buoy, 9. Several blogs back I mentioned joining the YMCA, for the purpose of strength training and swimming. Being every bit as disciplined as Lily, I’ve done a double workout, twice a week, ever since.

Swimming laps brought an interesting discovery: when I do forward crawl, what we used to call “overhand,” I found that my legs would consistently sink on the return lap. I lamented about this to exactly the wrong (or, perhaps, exactly the right) person, a friend who knows a lot about swimming who suggested I use a pull buoy. 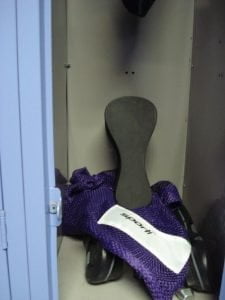 Not babka, but a pull buoy! Pictured in my locker at the YMCA.

I ignored my friend’s advice, figuring as I got stronger the issue would resolve itself, but it didn’t, I must have complained about it again because the item pictured above arrived as a holiday surprise.

How is it used?

You wedge it between your legs, wide end up, as far as it will go. New things sometimes make me nervous but I’ve learned that most of the time they end up being not that bad. I bravely used the buoy for both swimming sessions this week. The first time it actually made me laugh. It felt so weird having this thing between my thighs, hoisting my legs to the surface! After some experimenting I figured out how to stop it from carrying me sideways when I turned. Now I wonder how I ever managed without it.

That’s the scoop on the pull buoy. Next up, belly dancing!

If you embarrass me I’m going to scream.

Not to worry, Lily! This, too, has to do with fitness so I know you’ll be a fan. At and around Christmas we had a lot of snow and ice on the ground. The roads were slick and the sidewalks perilous. I usually take a walk 3 times or more a week, but at the risk of slipping and hurting myself I sought indoor options. First, I returned to the Nordic Track.

I thought so, too, 9. Then I remembered the website dailyom.com, specifically about an online belly dancing class offered there. A few clicks on the keyboard and there it was: Belly Dancing Goddess Workout! Ten 20-minute lessons, one step per lesson, with the steps made into a routine by the end.

Maybe just for you two and Hoosegow, Lily, and it’s a lot of fun. The instructor is a cheerful young British woman with lots of hair and killer core muscles. I’ve completed the first four lessons and got myself a coin-laden hip scarf because it’s even more fun when the steps come with a jingle!

One final “B” that is definitely performance-oriented: Ballet. As in The Nutcracker.  I am honored to be in the Dance Center of Walla Walla’s production on January 6th and 7th. It’s delightful to work in a group of talented dancers, actors, choreographers and directors.

Just a little bit. My part is mostly acting. I play the grandmother in Act One, the party scene (which makes me want to say, “I’m not a grandmother in real life, but I play one on the stage.”). Everyone in that scene dances in the Grand Waltz.

For more information, including show times and where to purchase tickets, go here: