Blog 399, a Contest, and the People Inside

Why did you start, anyway?

Good question, 9. It was something I decided to do to promote my writing. That August my first book, Small-g City, was released. I wanted to attract readers to my newly-launched website and build excitement leading up to the publication date.

I think so, Lily. It was part of a larger marketing campaign, and that September I had loads of fun doing readings and Q & A sessions on both sides of Washington State. The blogs served the dual purpose of announcing book events, as well as reminding people that yes, I write, because look: I’m writing!

The farther into digital life we go, the more difficult it is to attract attention. Sometimes I mention an event several times, through blogs and events announcements at the website, and links to these posts are sent to my email list and posted at Facebook.

Speaking of which, I’ll soon receive final edits for book four in my contemporary fantasy/mythology series, what I refer to as the “G” series, in a couple of weeks. Crisis in Big-G City is, at this time, anticipated for publication early in 2023.

It’s nice to have something special to announce in blog 399. I’m excited about sharing the cover art as soon as it’s available. It will have a superhero twist and feature two characters who figure prominently in book three, Beyond Big-G City.

I see a contest possibility here. . . 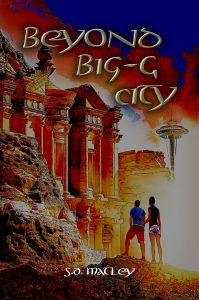 What do they get?

Copies of the first three books in the series, signed by the author (that’s me!).

Okay, readers, put on your thinking caps! We look forward to receiving your entries (Hoosegow most of all). . .