Boys and Girls and the People Inside 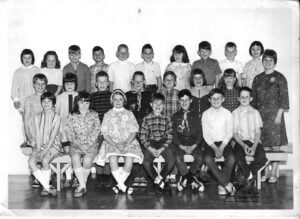 Sometimes it’s hard to get away from the present, especially this ever-present “present” of the COVID-19 pandemic, high unemployment, a struggling economy and the brutal federal response to largely peaceful civil rights protests. But I’m determined to get away from all of this, plus the loss just last night of my terminally sick pup and the family losses some dear friends suffered in the past few days. I will write, instead, about boys and girls.

Specifically, I will write about fifth-grade boys and girls, the ones I was in fifth grade with. Lily, you remember this.

9, this is coming up for you next year.

Is it grim? Maybe I’ll leave the room until you’re done.

No, not grim. In retrospect, I consider it funny.

Ugh! I knew you were going to embarrass me! Don’t say who I had a crush on, okay?

We had a really good teacher that year, someone I’ll call Mrs. C.

Both the fifth grade teachers at Lincoln had last names that started with C.

Good. Then you can tell us what holidays we celebrated in grade school.

Uhm, Halloween, for sure, and we have special art projects for Thanksgiving every year.

One big blur of construction paper, glue and crayons.

We do a Christmas art project, too, and they always make us sing in the big auditorium.

Or play Christmas carols when we started band and orchestra.

And then there’s Valentine’s Day.

I always felt bad after boys and girls started liking each other. I didn’t really want a boyfriend, but I felt left out when some of my friends got special valentines from special boys. But in Mrs. C.’s class, it was different. We still made construction paper envelopes to hang on our desks for the regular valentines that everyone exchanged, but I had something else to think about that day because the girls in our class were in charge of the Valentine’s Day party. 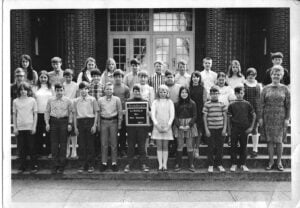 Exactly. And the October before that, Mrs. C. had the boys do the Halloween party.

I love Halloween! It’s the day before my birthday.

It was a pretty good party, for boys. They put up orange and black streamers and brought lots of food. Cookies and cupcakes and a chocolate layer cake with a frosting spider web on the top. Their moms made everything for them, I’m pretty sure. I remember the boy whose mom made the layer cake told us that whoever got the toothpick she’d baked into the cake had to give her a kiss. It was soooo embarrassing.

Why? Did you get the toothpick?

On to happier times. Lily, what do you remember about the Valentine’s Day party?

It was like the one the boys did for Halloween only better. Our decorations were fancier. Lots of paper hearts on doilies, besides streamers. Food, of course, and most girls made their own. I made heart-shaped sugar cookies with pink frosting and red sprinkles. But what really made our party stand out was confetti! It took us hours, tearing newspaper into tiny little pieces and we did it at home. I made a big cardboard box full of the stuff.

Wait! The teacher let you throw confetti? In the classroom?

Kind of. She said we could do it if we waited until the last five minutes of the school day and if we, as hostesses, promised to stay and clean it up so Mr. Mac in maintenance didn’t have to.

We girls did a ton of work making the stuff but even the idea of a big confetti fight distracted the boys so much they barely talked to us. They just kept eyeing the boxes and bags of confetti. And watching the clock. And even when they threw it, they threw it at each other, not at us! It was truly a social disaster. And then we were stuck with the clean-up.

But don’t forget, two or three of the boys stayed around to help.

He was a really nice boy, Lily. Somehow, I suspect that he knows how to cook now that he’s an adult. A nice quality in a man. Who knows, maybe he even does the dishes?

Boys do that kind of stuff?

More so these days than ever, 9. Though many gender role differences persist, overall we’re making progress in developing non-traditional skill sets. Which reminds me, I need to show you two how to restring the weed-eater. . .