Calming Down and the People Inside

We’re going somewhere! This is so exciting!! After being “in place” for months I have a valid reason to go somewhere else, a job in another town, a stunning 120+ miles south of Walla Walla. The hardest part about this block-busting four-day road trip? Calming down enough to prepare for it.

Yes, of course I have a list. I even have the fleeting common sense to refer to it from time to time. Today I’ve finalized the arrangements with the house sitter, laundered and ironed my costume and travel clothes, and wildly flitted between a dozen small activities, finishing none of them. These would be done by now if I were better at (say it with me) calming down!

Stay! Long enough to focus, if you please, or we’ll never get out of here.

What am I going to use for artwork for this blog? If I can’t think of anything I’ll- –

You took that picture of your amp and suitcase on the hand truck. Remember?

Thanks, 9. Here it is. Not all that exciting a picture, unless you’re the one who has to haul the amp and the suitcase that Matilda lives in into the Oregon Trail Interpretive Center single-handed. Plus carrying the folded down microphone stand. The mic and the cords (including an extra one for backup) are in with Matilda. If I carry my sunscreen and water and snack and journal and whatever else in a back pack, I can do it! 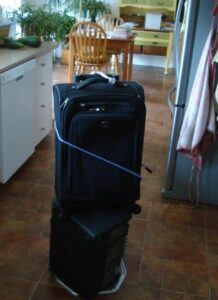 Hand cart, obscured by Matilda’s suitcase and a battery-powered amp. Are we calming down yet?

I wonder if Matilda likes traveling in a suitcase?

Good question, Lily. Our route from Walla Walla to Baker City is one she traveled in 1844, though there were no such towns at the time. Except we’re going in the opposite direction.

Do you think she’ll notice?

Good question, 9. Maybe she’ll start thumping around in there and telling me we’re going the wrong way! But I can guarantee she’ll be delighted when we get to the Interpretive Center, and that she’ll thank the folks there for inviting her to speak about her life and times.

That’s on Friday. This is Wednesday*. Are you calming down yet?

Okay, okay! Yes, I’ll get back to packing and tidying up the house. Then I’ll run through Matilda’s presentation and pay the bills and do my vocal exercises and- –

And I’ll be posting this blog one day early, Thursday, instead of the usual Friday. In case the hotel WiFi isn’t very strong.

Do us a favor- -don’t cross it off until you’ve really done it, okay?

Okay, okay! Am I ever glad Matilda isn’t adding her two cents to this conversation. Probably she’s saving her voice for ten hour-long presentations:

Wow, that is a lot of talking.

And that, 9, is why we’re taking the sound system. By the time we’re headed home we’ll be good and tired and, hopefully, calming down.

*The day the blog was written; this is Thursday. . .