Carrying On With the People Inside 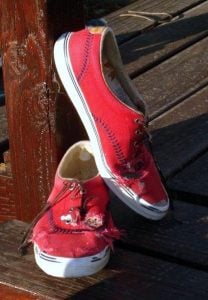 Just when I thought I’d worn my democracy Keds down to the bitter end, there’s more work to be done: the work of carrying on.

The year is barely a week old, and already a vast threat to American democracy has dominated the airwaves. The crisis has passed (I hope), but how, after witnessing the incredible and inexcusable violence in Washington D. C., on January 6, 2021- -violence incited by a sitting president- -do we go about the business of carrying on?

There are several strategies. Strike out in retaliatory violence? Call your national senators and representative? Bury your head in the figurative sand? Which of these will carry you forward, as well as help you carry on in the moment?

So how’s that working?

Not so hot, from what I’ve observed. Maybe the best way of carrying on is to contain the current damage and take a few moments to. . .think.

But we’ve got to do something, now! There’s all this really wrong stuff going on!

I agree with the second part of that, 9, and the first part is not surprising, seeing as you’re my inner 9-year-old. I’d be lying if I said I haven’t felt exactly the way you do this week, but in a world that seems disastrously short on cooler heads, I’m trying to be one of them. There are channels for expressing your concerns that will not incite further damage and may, I hope, do some actual good: Express your concerns to your national senators and representative.

Democracy is a participatory form of government. We elect those who represent us and, whether you voted for them or the other candidate, they are supposed to consider your views in making the decisions that affect you. Do I believe my individual call or email will sway Senators Murray and Cantwell (with whom my views pretty much align), or Representative McMorris Rodgers (with whom I frequently disagree)? No. But in the aggregate, each tiny drop of constituent opinion helps these people form a picture of what the folks back home are seeing. Added benefit: it lets off some steam and makes me feel better when I speak up.

Think of political participation like you do kindness, how one small act can give someone who needs it a little bit of hope, a little bit of confidence, that helps them in carrying on. A glimpse of a bigger picture in which things can work out for them.

I’m not getting this. You think calling D. C. and being nice to someone are the same thing?

Not exactly, Lily, but every human behavior has a sort of system to it. Speaking up is one way we as individuals contribute to the state of the world. Our actions shape the world. Each of us has a role in defining the kind of world we want to live in: a world that makes carrying on worthwhile.

The poison sets in when people grow so frustrated they stop looking for positive solutions. And, sad to say, there are some people in the world who lack a conscience for others and think only of themselves, called sociopaths. When the frustrated people find sociopaths who seem to offer the key to their happiness, or liberation, or whatever it is they are seeking, that’s where the situation becomes dangerous for everybody. The power of a false messiah, coupled with the brainwashing capabilities of social media and repeated calls for violence, is off-the-charts toxic.

It’s hard not to feel powerless after the explosion of hatred and violence we witnessed this week. That makes it all the more important to speak your truth to the people in power, which is the easy part. The hard part is, how do We, The People, make peace with each other?

To me this looks like a long and exceedingly rocky road.I dearly hope the vast majority of us agree that violence is not part of the solution. I can’t imagine what plan we could follow to get from this week’s point A to some future, better point B. But we must start somewhere, remain mindful of what is changing around us, and seek solutions, together. If we don’t, we’re toast.

Back off. Cool down. Speak up. Carry on.