Catherine McNabb and the People Inside 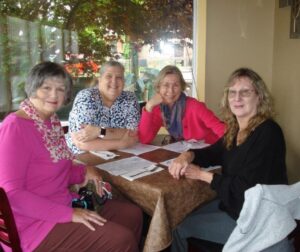 As my dear friend the great and recently late Kathy Beck once told me, there’s an age at which your social life is comprised of driving friends to medical appointments and attending their funerals. Last week another dear friend passed beyond the veil, the highly talented, kind, funny and in all ways excellent Catherine McNabb.

That’s right, 9. She’d just started home hospice and was looking good, physically tired but beautifully dressed, perfectly coiffed, and totally running the show. Her stepsons and their families were there as well; she masterfully entertained the crowd.

Why don’t you start at the beginning?

Thanks, Lily. Appropriate to your interests, we met doing theatre. At the Key City Playhouse (now Key City Public Theatre), to be exact. It was the early 1990s, KCP’s first Christmas show in a new space we’d taken earlier that year. The production was the Church/Hawley musical version of “A Christmas Carol.” Catherine, an excellent soprano, was cast as Mrs. Cratchit. I played Scrooge’s servant, the Charwoman, suitable to my singing skill (at that time, a sort of untrained talk-singing).

I was well-established at KCP then, and Catherine had committed the transgression of being NEW. I sized up this tall, dark-haired stranger and her bright, friendly eyes. Sure, she looked like a nice person, and she could sing the socks off of Mrs. Cratchit’s poignant ballad to the dead Tiny Tim, but looks can be deceiving.

Not so, in this case. Not only was she an incredibly strong actor, she was kind and encouraging to everyone around her. And she told me something I did not know: her stepson, who was also in the cast, was a somewhat removed cousin of mine. I also learned that my dad, who was a county court commissioner at one time, had officiated at Catherine and Frank McNabb’s wedding a few years earlier.

We soon became friends and performed in many shows together. Catherine had brilliant comic timing and a formidable stature, excellent for playing character roles such as Lady Bracknell in The Importance of Being Earnest and the Queen of Hearts in Alice in Wonderland. She could also play the vamp. My all-time favorite of her performances was as a cat-suited torch singer, complete with ears and tail, during an interlude in Cinderella. Backed by a jazz trio, she strutted the stage singing Peggy Lee’s hit “Fever.” If a bald man was in the audience she’d sit on his lap and polish his scalp with her tail.

I wish I had pictures of those moments. If they still exist, they are moldering away in the Key City Public Theatre archives. She performed with other groups as well, including Bare Boards and Passion, and the Paradise Theater School, and became the driving force behind Port Townsend Shorts, a free-to-the-public monthly evening of classic short story readings by local actors. She became a regular on the KPTZ public radio show Tossed Salad, reading short stories as part of a music and arts program hosted by Phil Andrus. Phil replayed one of her favorite readings, Love Never Ends by Canadian author Stuart McLean this past Sunday. It airs again this afternoon, Friday, October 15, 3-5 P, on his new show Cats in Our Laps. Catherine’s reading is in the second hour. You can listen here: https://kptz.org/listen/

The few performing photos of Catherine in my personal collection are from two happy fringe theater groups. Unfortunately,  I’m working remote today and can’t get at them. She worked with Hit-and-Run Theater and made a guest appearance in the Schwartz Sisters’ Family Reunion Show. 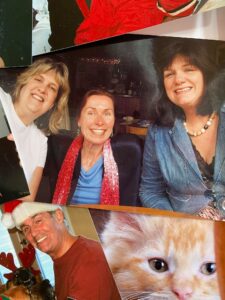 Everything I’ve said so far doesn’t even equal the tip of the iceberg of who Catherine was. She retired from the City of Port Townsend Public Works Department a few years ago, shortly after she was diagnosed with non small-cell lung cancer. The diagnosis was so unfair- -never a smoker, someone who’d worked hard for decades to enjoy travel with her husband, Frank in retirement. They did make some trips, including a tour of Ireland two years ago, also Mexico, Hawaii and long weekend gatherings at camping spots with all their kids and grandkids. COVID put another dent in their plans, but in spite of that she lived valiantly and well for 3 years.

She lived kindly and generously, too. Catherine, in contrast to her buoyant presence and incredible comedic talent on stage and off, was also absolutely passionate about helping people in need, especially children in need. I remember her saying that big people need to help little people, and if you see a hungry child you feed them, damn it! She was a good and thorough celebrator of Christmas, a maker and baker and giver of gifts, and, most especially, a giver of love to her family and friends. And animals. And Port Townsend. And the world.

And still there’s more. Others will doubtless talk and write about the other worlds she moved in, like the Port Townsend Sister City project with Ichikawa, Japan. Or the early days of the Victorian Festival. Or the incredible baking she treated us with. She once claimed she kept all the Seattle cardiologists in business because she always used butter.

And the personal relationships. She and I were part of a lunch foursome with our friends Judy and Ginger, also from the theatre world. For more than two decades we regularly met for lunch to celebrate birthdays or got together “just because,” talked about our husbands, and kids, and pets, and what the heck was going on in the world. And laughter. And always a dessert or two with four forks.

Catherine’s sense of humor remained with her to the end. When she began home hospice, just over a month ago, she posted about it in Facebook to clarify that she intended to milk the experience for all it was worth. Like everyone who knew her and loved her, I can’t believe she’s gone, and am amazed at the depth and breadth and achievement of her wonderful life.

Love you friends, and tell them you love them. There is nothing more important in this world