Common Ground with the People Inside

Keeping up with two inner selves is not as easy as it looks! Think about it. Here I am, sixty, and in constant dialogue with a fourteen-year-old and a nine-year-old. The fortunate part is, they are both me. Provided I get my chronology of life events right, it is possible to find common ground with Lily and 9.

To illustrate this concept, I’m going to shout out some topics and we’ll all take a turn responding, okay?

Cooperation is a wonderful thing! Let’s start with something non-controversial: animals. 9, you go first.

I like animals. We have a dog named Clover who’s really sweet. The horses are okay, ponies, really, but I’m not a horse-crazy girl. That would be my sister, which is why we have horses. Plus, she takes Clover to Dog 4-H and they win lots of ribbons at the fair. I’d really, really like to have a cat but we can’t have one because Dad’s allergic. 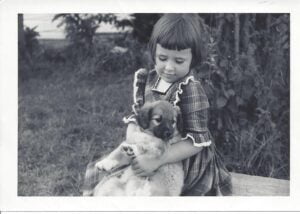 Wow, 9, that’s the most I’ve ever heard you say about anything.

Maybe that’s because it’s a good question for once?

I like animals, too, and I agree with 9 that it would be wonderful to have a cat. We still have Clover and we still have horses. I’m with you about horses, 9, but I still had to ride in parades and compete in the fair until last year. I’d been wanting to quit for a while, but when I was thirteen there was this incident. At the fair, at the end of evening exercise period, I was riding my horse back to the fairgrounds barn and she bucked me off. It sure wasn’t the first time that happened, but this time she kept bucking and her hooves came down really close to my head. I kind of didn’t realize it because I was stunned, but my sister sure did, and she grabbed my horse by the reins and started yelling at it and slapping its neck with the reins. She loves all animals and would never have done that in normal circumstances but she was really scared that the horse would kill me. As soon as I could get up I started yelling at her. Some of the other horse kids made a circle around us like there was going to be a fist-fight, and then Dad showed up and. . .well, it wasn’t his proudest moment. So after that, they let me quit doing the horse thing.

Whew! Am I ever glad those days are over!

You’ll both be glad to know that we eventually get cats! I got the first one when I was twenty and have had one or more ever since.

Right now there are three, and a small dog, too. The hard part is, some of them are getting old and, well, since I’m a grown-up now I have to make some sad decisions sometimes.

I’m more of a policy person than a politics person. This year I wrote an essay about abolishing the Electoral College, for example. But I always knew Nixon was a crook! It’s driving me crazy that the Watergate hearings are the only thing on TV right now.

I can’t stand Nixon! I was so mad when he won the straw poll in Mrs. Morton’s room last fall and I still can’t believe he won! I will never, ever take the HHH bumper sticker off my bulletin board. Never!

Dear reader, if you weren’t around in 1968, you may not know that HHH was Hubert Horatio Humphrey, Vice President under Lyndon Johnson and Democratic Party Presidential Nominee in that election cycle.

Lily, 9, the Watergate scandal was an awful thing, but these days the American political climate is even worse. The country is ideologically divided and lots of politicians, including the president, are fanning the flames. We’re in the middle of a deadly pandemic, a civil rights crisis and a mostly shut-down economy. One thing is constant, though: I still support liberal policies and ideals.

Good, because the slip I have to wear under my Sunday dress is itchy.

Not my best subject. Lots of kids draw things better than I do.

I’m not very good at it, either, 9. The one time I had fun with it was in Mr. Barcott’s seventh grade, a couple of years ago. He had us write and illustrate our own comic strips. Mine was about a superhero named Percy Pear. All the characters were fruit so they were easy to draw and I could get away with giving them stick arms and legs. The bad guy was Punchy Pomegranate!

I am still completely mediocre at art, though sometimes I make myself draw to flex that creative muscle. I’ve done it twice since the pandemic restrictions began. Want to see? 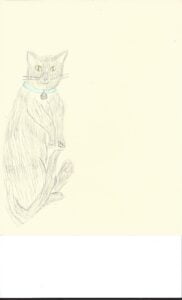 What’s the other thing, though? 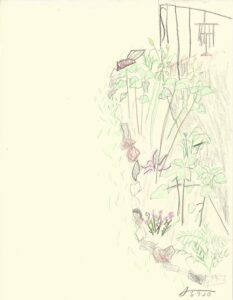 A wretchedly common rendition of the patio garden, 2020.

It’s a very lame attempt at the garden bed off the patio. The good news is, there’s still time for us to improve as artists. Grandma Moses* didn’t really get started until she was 78!

Thanks, Lily and 9, for exploring some common ground with me. I think it’s interesting that, while the circumstances in our life have changed, our opinions and values pretty much haven’t.

I am so excited that we have three cats!

Me, too, 9. Between you and me and Lily, we’ve pretty much got it all.