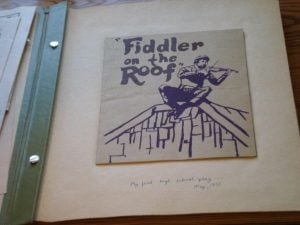 An early lesson in compassion

Forty-one years ago I was a small-town high school sophomore.

Our school district wasn’t prosperous; levies had failed repeatedly and funds were tight. Miraculously, in 1973, money was allotted to produce a spring musical. This hadn’t happened in decades and students flocked to auditions for “Finian’s Rainbow” (by Harburg, Saidy and Lane): music, dancing, romance, comedy, and, slipped in among these entertainments, a discussion of bigotry. As a junior high student I couldn’t participate in the play, but was thrilled to be cast in “Fiddler on the Roof” two years later.

This musical is based on a series of stories by Yiddish author Sholem Aleichem (book Joseph Stein, music Jerry Bock, lyrics Sheldon Harnick). Our town, predominantly white and Christian, was mirrored in the cast. How do you build a bridge between American school kids in 1975 and Russian Jews whose customs, traditions and villages were threatened by the whims of a Tsar?

After correcting an actor for reading “pogrom” as “program” our director, who was also the school librarian and taught literature, created an information sheet about Jewish history, religion and culture. The scent of mimeograph fluid mixed with events and customs most of us had never heard of. With this knowledge we were better able to create a meaningful context for every line, every song, every scene. I can’t speak for the others in the cast, but I became more appreciative of Jewish customs and traditions and have felt more compassion for the Jewish people ever since.

Art is how we tell stories, share feelings, create visions for others to contemplate. It’s part of being human and participating in the world. The 2016 presidential election seems to be driving a wedge between Americans more than usual and I wonder, if each of us took the time and effort to understand our fellow citizens that we feel threatened by, would the world be a little less crazy? Exploring through art- -visual, literary, performing- -might be a good place to start.

Writers, I believe, are lucky, especially if they write fiction. A compelling story has heroes and villains, but for readers to relate to them they have to seem real. Convincing fictional characters have both dark and light aspects, regardless of where they fall on the good guy/bad guy continuum. Why is this so? Maybe it’s because humans understand intuitively that no one is only what they appear to be on the surface. We know this, yet it’s easy to apply stereotypes to people whose views, culture, religion, ethnicity and/or orientation differ from our own. Something as innocent-seeming as musical theater can quickly set us straight, if we’re listening.

I’m not the ghost of a dead Jewish grandmother in real life, but I played one on the Port Townsend High School auditorium stage 41 years ago. I was taught to walk like a hundred-year-old and came to appreciate the influence a respected elder, Grandma Tzeitel, had over skeptical Golda. Can I extend the same sympathetic interest to a fellow citizen whose political leanings, lifestyle or outlook I find distasteful? If life were truly like a song, I could say yes, but like everyone else I have both dark and light aspects. Like any other character on the globe, I can but try.