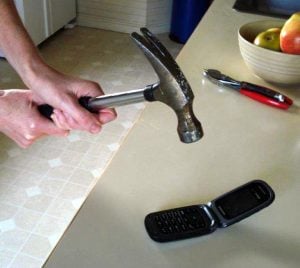 One way to end a conference call.

Technophobe though I am, I truly appreciate the modern-day convenience of conference calls. It’s so easy! You dial a number to the central hub, put in a code, say your name and, voila, you’re there! Unless, of course. . .

I’ve participated in two conference calls in two weeks. It’s the way an organization I belong to holds most board meetings. Eleven of us, plus the group’s administrator, live all over the continental United States. Conference calls enable us to move ahead with business at minimal expense. The only tricky thing about arranging our conference calls is setting a time that isn’t too early for those of us in the Pacific zone or too late for those in the East. Except when. . .

Last year my husband and I cancelled our landline. It was forty dollars a month we didn’t need to spend and only worked about half the time anyway. We communicate with the rest of the world with two ancient-ish cell phones, the clamshell variety. This works quite well, but. . .

It was last Thursday, the first board meeting of the year with a full agenda, estimated to last ninety minutes. Changes to the By Laws were up for discussion, also the annual budget. Important stuff. I dialed at the appointed hour with the usual success. After about twenty minutes, my connection started breaking up. Soon, the call was dropped.

I dialed in again, said my name again, apologized for the interruption. We arrived at the agenda item I was responsible for: a fairly detailed description of the Board Policy Manual project for the new board members. The project started last year. I shared the work the committee had done so far and began laying out plans for completion. Almost. Because. . .

The call dropped again. I made three or four more attempts, the call dropping in progressively shorter increments of time. I apologized to the rest of the board, unsure as to who I might be talking over or if anyone could hear me, and gave up.

Mid-way through this drama my husband had dialed up our cell phone provider. The customer service department is highly automated and built on the assumption that your cell phone is text-enabled. Ours (by choice) are not. However, our provider has the capability to text us. The chirpy digital assistant kept texting access codes to Bruce that he couldn’t return. The menu looped in a way that didn’t offer the option of speaking with a (live) customer service representative. Bruce was mightily frustrated by the time I dropped out of the conference call. I offered to try my luck with customer service.

Ms. Digital guided me through the customer service menu with cheer. When she said an access code would be sent in a text I blurted a very powerful word:

I had only meant to express my compound frustration but, lo! A phone rang. In seconds, I was speaking with a real person! In a few minutes an efficient man who was a good listener set up a work ticket to address the connection problem. He also (after asking a several security questions) gave us a verification code for future use. By the end of the day, our connection was working perfectly.

The next time you’re dealing with an automated phone menu that is the modern-day equivalent of the Minotaur’s labyrinth, feel free to try this delightful short cut. I don’t know if “No!” will work each and every time, but hey, it’s one more tool for the digital world toolbox.