Contest! Plus a Few Words About Bricks and Mortar 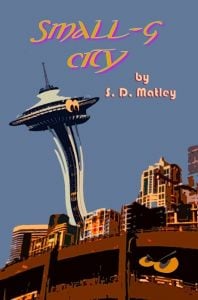 A contest between Clifford and Ralph?

I’ve never liked contests, possibly because I never win contests. As such, I’ve decided to approach contests from a different angle. Announcing the first ever contest sponsored by S. D. Matley, author!

Like all contest sponsors I have an ulterior motive. I want to hear from folks who’ve read my 2015 fantasy novella Small-g City and encourage even more people to read it between now and the end of February. Here’s how it works:

What: Who is your favorite Small-g City character (in 100 words or less)

Open to: Anyone who has read Small-g City, except me

How to enter: go to https://www.susandmatley.com/contact/ and send in your entry!

The Prize: Two autographed copies of Small-g City to the winner

If you’ve already read Small-g City the prize might seem anticlimactic, but consider this:

Small-g City is available online at: https://www.susandmatley.com/small-g-city/ It’s also available at The Sequel in Enumclaw, WA http://www.thesequel-usedbooks.net/; Book & Game http://www.bookandgame.com/ and Earthlight Books http://www.earthlightbooks.com/pg/index.html in Walla Walla, WA; Village Shoppes in Dayton, WA (you can pay them a virtual visit at Facebook).

Speaking of “brick and mortar” stores, I have another very cool contest planned for March and April, and I’m working with my web guy to add a “Bricks and Mortar” page to my website. This idea started as a way to thank and promote the stores that carry my books, but lately I’ve been wondering if the upswing in online shopping is contributing to increased societal feelings of isolation? Seems to me we’re growing more fearful of other humans as face-to-face contacts decline. I encourage you to back away from the Internet and visit your local independent book store. Many offer discounts on special orders and have deals on the current best sellers. Who knows- -maybe dealing with that living, breathing person behind the book store counter will be one baby step toward saving the world?