Cooking with the People Inside

Cooking. Something I’ve been doing in one way or another since I was younger than 9. What’s the first thing you remember learning how to make, 9?

Fudge! With Dad, on Batman night.

That’s how I remember it, too. You had quite a run of learning how to make cookies, cakes and quick breads after that, most of it on your own, working from recipes out of books and magazines.

I still make fudge, but Dad doesn’t like some of my other cooking.

Lily, you have to face it, your life changed drastically when you started going to Weight Watchers.

Isn’t that a grown-up thing?

Probably, 9, but Lily signed up for it shortly before her 12th birthday, prompted by a very cruel remark from her best friend.

The same best friend I have now?

Yes. Sorry to say that when the friend turned into a teenager one day and you were still what she considered a little kid, she. . .well, never mind. That’s a story for another day.

Speaking of Weight Watchers, you’d be shocked and amazed at all the desserts you can make out of reconstituted dry nonfat milk, unflavored gelatin and artificial sweetener.

I confess, it wasn’t the best, but it got the job done for the eight months it took Lily to reach goal weight. All that time with only one cheat! Lily, you remember that, don’t you?

How could I forget? I snitched two pieces of fudge at Christmas.

The funny thing was, you made several batches of fudge for gifts before then and didn’t so much as lick a spoon. You must have snapped under the pressure. That was around the time you got interested in health food.

That’s when Dad started making jokes about my cooking.

It gets worse. I remember some remarks Dad made about your invention, Bean Sprout Casserole. You made it for dinner when Mom had to be somewhere overnight. Ann was away at college so that left you in charge.

Dad probably ate a quart of ice cream to make up for it.

You’ll be glad (maybe) to know that I persist in being an adventurous and creative cook. I’ve developed my own style, called “what’s in the refrigerator that needs to be used today?” For variety I might look to the pantry, instead, and conjure a meal based on the contents of some box or can that’s been there a long time. Other times, I just say what the heck?

That’s the way my cooking has gone this week. The “what the heck” culinary school has so far created: 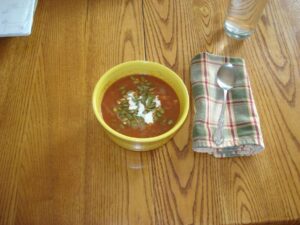 What do you think about that?

You take after Dad, 9. For dessert we’re working through three eternal-seeming cakes that have been in the freezer since before Christmas. 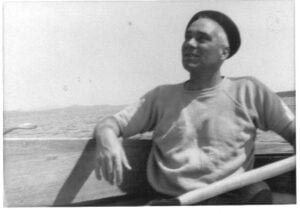 My favorite picture of Dad. When it came to cooking, fudge was his specialty.

Dad is on my mind a lot right now. On Sunday, March 13, it will be 28 years since he left Earth. Honestly, I’d be thrilled if he were still here to make fun of my cooking. I’m pretty sure he once referred to me as the Alka-Seltzer Bride. Remember the Alka-Seltzer commercial about the newlyweds? The wife talks about the dish she made for their first home-cooked meal (a huge, indigestible dumpling) and, turning the pages of her cookbook, dreams of what she’ll make for dinner tomorrow (Marshmallow Meatballs, anyone?) while the husband displays his symptoms out of her viewing. The commercial ends with the tagline “What love doesn’t conquer, Alka-Seltzer will.” For a walk down memory lane, click here:

Cooking. It can bring people together. In my case, it can even make them laugh. Like my friend Judy did when I texted her a photo of this a couple of days ago: 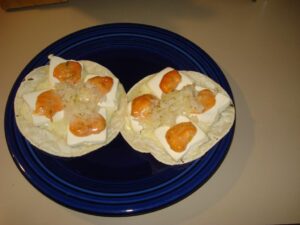 Cooking: the catalyst for my friend Judy’s laughter. These tasted great, but I think the presentation needs work!

You guessed it: Tofu Reuben Tostadas.