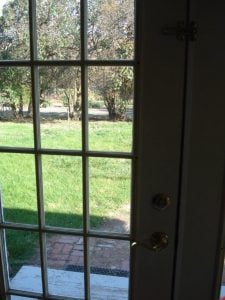 This week I’ve been contemplating the relationship between crime, fear, love and mercy. My thoughts turned in that direction Monday evening, when something unexpected happened at our house.

We live one mile east of a small town (population 300+/-), amidst thousands of acres of wheat. Not a lot happens out here. On September 19, approximately 6:15 PM, our dachshund-beagle mix went more bananas than usual. He barked, growled and threw his front paws against the French doors that open to our covered porch. A young, strung-out woman with an unsheathed knife in her hand was on the other side of the glass. She was talking about snakes, big snakes that were crawling on her and were going to crush her. The knife point flicked near her own neck. We locked the door and called 911.

Our place is about 20 miles from the sheriff’s office. It was a long wait, listening through the glass to agitated cries about snakes, alternating with “Did you call somebody? I’m an adult, I don’t need anybody to come get me.” Yes, we told her, we called 911. “Tell them not to come!”

The dispatcher kept the connection open. Half an hour passed in this weird impasse while we wondered where this young woman had come from. We live on the corner of a state highway and a rural road. No parked cars were in sight so she hadn’t brought herself. She must have been dropped off and left, like the creeps who abandon unwanted cats and dogs at this intersection. We felt terrible for her. Still, she had a knife.

After a long session of talking to us and the snakes, the young woman bolted off the porch and charged through the lilacs, then ran jerkily up our driveway. She tried to open the gate and, failing that, vaulted over the fence. She continued toward the heavily-traveled 2- lane highway. Moments later, two squad cars arrived. An officer got out of the first one, weapon drawn. We couldn’t hear what he said but the woman, who by some miracle was not yet in the highway, dropped to her knees, put her hands behind her back and her cheek to the pavement. She’d played this scene before. The second officer cuffed her hands. She didn’t resist as they secured her in the back seat of a squad car.

“We’re going to see the snake exterminator,” the first deputy told her. They left for St. Mary’s Hospital where the staff would try to get the junk out of her system (meth or heroin or possibly both together, the officers guessed). Afterwards, a crisis intervention counselor would talk to her. As we filled out our statements the second officer, who waited with us, learned that (if she’d given her real name) she was born in 1991, was a transient, and had been arrested 2 weeks ago in the county seat, 20 miles away.

Is there anyone in the world, I wonder, who loves this young woman enough to intervene and get her into rehab? If there is such a person, do they recognize what bad shape she’s in? It takes a lot of people to bring someone back from the brink of substance abuse, the ones who start the process and the supporters along the way who are often fighting their own battles. Anyone who succeeds in this effort is dedicated and heroic.

Mercy is defined by my Merriam-Webster Dictionary (© 1974) as “compassion shown to an offender.” I doubt there’s a human on Earth who hasn’t both offended against and been offended by others. If this is true, we’re all equal in the need to extend mercy toward each other. For the young woman who showed up on our porch, I can do this; for whoever dropped her off, and for all those who have abandoned their animals out this way, not so much.