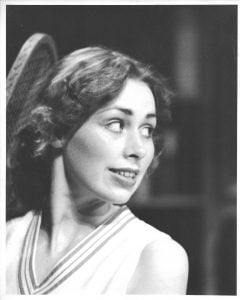 It started here: as Felicity Cunningham in “The Real Inspector Hound,” Whitman College, 1978.

Since I’m a woman I can’t be the same man in any circumstance. But what’s all this about the river? I’ll try to explain with two examples of doing the same thing twice, but differently.

If you’re like me and have plenty of acting in your past, chances are you’ve played the same role twice, maybe more. This has happened to me- -twice. Two roles that I played at Whitman College in the late 1970s came my way again in the 1990s via Key City Players.

First up, Felicity Cunningham from Tom Stoppard’s The Real Inspector Hound. Student director Steve Brady cast me in this role in 1978. Felicity is a weekend guest at Muldoon Manor and close friend of the lady of the house, Cynthia Muldoon. The play is a parody of Agatha Christie style murder mysteries as well as a huge poke in the eye to theatre critics. Ultimately, the critics step on stage. Neither critic survives the play within the play. 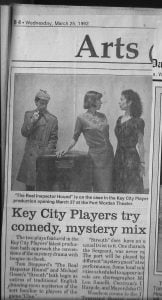 I was a college freshman when I first performed in Hound. It was an over-the-top role with quick costume changes and overwrought emotions. In short, it was a blast. Fourteen years later I returned to the role in a Key City Players production directed by Lynda Woodson. The script, of course, was the same but. . .Different stage, different actors, different time of life. I had a deeper understanding of the play’s humor, also an outrageous padded bra.

My second repeat role was Dorine, the outspoken maid in Moliere’s Tartuffe. I first delighted in this character at Whitman College, 1979. It was a modified reader’s theatre production; though we carried our scripts during the performance we also had costumes, a simple set and blocking (the positioning and movement of actors on a stage). Visiting professor Heinz Geppert coordinated the project. 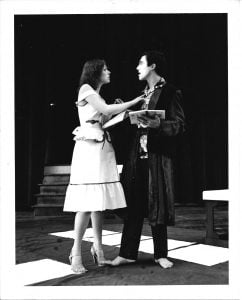 As Dorine in “Tartuffe,” with Alda Shepherd. Whitman College, 1979.

Dorine is a fabulous role, a maid of the court jester variety who speaks truth to power. She torments her employer, conservative and wealthy Orgon, with contrary opinions about Tartuffe, Orgon’s falsely pious spiritual advisor and real-life con artist. Dorine is a role you can play at any age. It doesn’t matter if you’re a college sophomore, relatively unmarked by life, or a world-wise thirty-three-year-old. I was the latter in the 1993 Key City Players production, directed by Dave Carruthers. 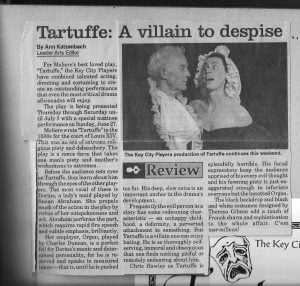 The 1993 version was a full production, with fabulous period costumes and a stark set, all of it in black and white. Having lived life and picking up some acting chops along the way, I prepared for Dorine with intense focus. I worked hard with both mind and body to build a solid anchor for my performance. When the figurative curtain rose, I was prepared in a way that allowed me to let go and really live the role. It was, I think, the best time I’ve ever spent on stage.

I made a vow to myself to perform Dorine again when I turned 50, in French. That age has come and gone and my French has gone completely. The river changed between 1978, 1993 and 2009. The river changes every millisecond. Change and the accumulation of years can broaden life, and why not, as standing still has never been a viable option? Whenever I cross a river, a little bit of Dorine and Felicity cross with me.