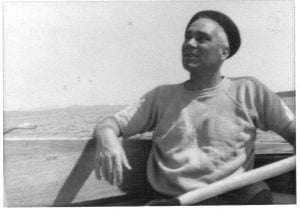 At this time of year I think about my dad, even more than I do at other times of year, which is a lot.

Dad was born approximately 25 miles from our place in Prescott, WA, in the small town of Starbuck, December 24, 1924. He and his twin, Donald, were 3 months premature. Donald didn’t make it, but Glenn Dean Abraham, Jr., did, warmed in the kitchen oven.

He also managed to make it through World War II after twenty-some missions in a B-17. He was a waist gunner and radio operator. His plane was shot down in April, 1945, and he was taken prisoner by the Germans. Twenty years old, he escaped once, was recaptured and escaped again, with the help of the French Resistance. After this stint he returned to Port Townsend, WA (his home since he was 3 years old) and married his high school sweetheart, Marjorie Jean Sullivan.

Like a lot of WW II vets, Dad took advantage of the GI bill and finished a bachelor’s degree in constitutional law, then his Juris Doctorate. He passed the bar exam. After teaching business law at WSU (then Washington State College) for 5 years he and Mom returned to Port Townsend where he opened a law practice.

Lawyer. A word that, in many minds, translates to something bad. Dad used to say all those jokes about lawyers were actually true stories, except for two of them (he never said which two). Some of his clients have shared how he nudged them away from making a bad decision (divorce, suing someone, etc.) or, if they were already in trouble, reminded them that they had the choice to change for the better; Port Townsend’s answer to Atticus Finch, before Go Set a Watchman came to light.

As a father, he was reluctant to give praise. “The girls know I’m proud of them unless I tell them I’m not.” He and Mom instilled in us the expectation of finishing college and learning how to support ourselves. But Dad wasn’t always strict and practical. Exhibit A: he taught me how to make fudge.

Remember when the TV series “Batman” was new? Dad loved that show, and it was on “Batman” night that I first remember him making fudge.

In a heavy saucepan, combine 2 cups granulated sugar, 3 ounces unsweetened chocolate and 7/8 cup milk. Over medium high heat, bring to a boil (stir sparingly, if at all) and cook to “soft ball” stage. Remove pan from heat, add 1 teaspoon vanilla and 2 tablespoons butter or margarine. With a hand-held electric mixer (we didn’t have one at first so we took turns beating it with a spoon), beat the fudge until it changes from a syrup consistency to a more solid state and “starts to lose its sheen.” Pour onto a greased plate and let it set until firm enough to cut into squares. Meantime, debate over who gets to lick the beaters, the spoon and the pan.

Five ingredients and easy enough to teach to an interested kid. I’ve made 4 batches this week (neighbors, beware) and hear Dad’s guidance in my head from the moment I measure the sugar to the time the fudge is ready to cut. “Your mother will like that batch,” he’d snort if it came out on the soft side (a bit under cooked and/or under beaten). Dad preferred his fudge dry and crumbly, who knows why. I’d make him a special batch at Christmas because no one else liked it that way. For twenty-one years, Dad’s been gone, but I’ll wish him a Happy Birthday and a Merry Christmas. Season’s greetings to you, too. Whichever holiday you celebrate, I hope it includes fudge.