Dancing with the Person Inside

From an O’Meara Dance Studio recital, late 1990s. Photo taken from the wings!

Last Sunday afternoon I met a friend downtown for iced coffee. As I ambled back to the car, replete with a tall skinny iced mocha for the first time in years, I noticed a poster for classes at the local dance studio taped inside a storefront window. I’ve been thinking about tap dancing ever since Bruce and I moved to Walla Walla 14 months ago. I’d love to join an adult tap class again after an 18-year hiatus! My inner fourteen-year-old nudged me to stop and read the poster. Alas, only ballet, hip-hop and modern dance were on offer.

You don’t need a class to dance, she reminded me.

All my life I’ve loved to dance. Well, maybe not the early ballet lessons in Mrs. Eldridge’s downtown Port Townsend studio. As often happens with younger siblings, I was presumed to want ballet lessons because my sister had been taking for two years and loved it. My first recital was in late spring, 1966. I’d just passed first grade with flying colors, having set aside whatever behavior had garnered me an unsatisfactory in citizenship the year before in kindergarten.

The recital was at the Chimacum school auditorium. It was my first time backstage. I was fascinated by all the different classes of girls, each class with its own dance, or two, and striking costumes. The older girls were flowers and fairies and ice skaters. The first year class, my class, was dressed in white leotard and tights with short white tutus, white marabou tails and round white ears attached to plastic headbands. You guessed it, we were mice.

That dance went pretty well. I never had to be in front and I remembered what to do because our dance had a story line. At the end, the farmer girl music started and three older girls in super-short gingham dresses chased us off stage with dainty dancer-like rakes. I’m sure we were absolutely darling, as the youngest class in any dance recital always is and always will be.

The next year was not so kind. I didn’t even know what my group was, character-wise. We wore longer tutus in earth tones over black leotards and did- -something. Whatever that something was wouldn’t stick in my mind. I struggled along, trying to follow the other girls but I always seemed half a step behind. Some of them were scowling at me by the time we finished. It was the end of my ballet career.

Bruce wasn’t keen on dancing and we didn’t do much of it during our life together. We were so busy all the time I didn’t miss it much when he was around, but now, on my own. . .

You don’t need a partner to dance.

True, though I did enjoy the dances in high school. The formal school-sponsored dances were okay and almost always involved a new dress, but it would have been strange to attend this kind of dance without a date. I didn’t have a steady boyfriend in high school. It was easier to find a date if the dance was “Sadie Hawkins” style where girls invited boys, but. . . 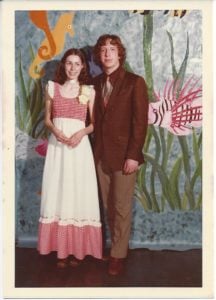 The only high school dance to which a boy invited me! My friend, Timothy Rondeau, had already purchased a corsage and the tickets but his girlfriend got sick the day of this “Octopus’s Garden”-themed event.

The dances I liked best were held at the community center. These were casual events. I could wear jeans and go with my girlfriends. We could dance in a group or with boys or by ourselves, it didn’t matter. So freeing, and the music was live! On the dance floor, for me there was no greater inspiration than a capable drummer. My body gave over to following the beat and I hardly ever stopped, no matter how tired I felt. It was like being under an enchantment, getting danced to death by the legendary Red Shoes.

When I was sixteen and seventeen, on nights my parents went out (bridge, cocktail parties and other parental pursuits of the 1970s) I’d move the furniture in the formal living room against the walls and make a big space to dance. I’d spin my favorite LP on the vast cabinet stereo, Duke Ellington’s Black, Brown and Beige. The living room was floor to ceiling windows on two sides. I could see myself reflected back from the darkness, shaping my movements from two perspectives as I spun and twirled and lunged, moving in quieter patterns when the music grew soft.

You don’t have to pay to dance, either.

As a twenty-something Seattle yuppie I paid copious cover charges while following my favorite bands (Annie Rose and the Thrillers, The Crazy Eights) to venues both conventional and seedy. The “Eights” had three trombone players who sometimes ran in place, their knees as high Hackney ponies in the show ring, as they played. How they achieved this without dying on the spot was an inspiration as well as a mystery.

You have a CD player.

She’s right, I do. At home I picked through the CD cabinet for an old favorite, the Afro-Latin Groove compilation SABROSO! Around the house we spun and gyrated and flew to the wild, precise percussion, the chanting, wailing voices, the horns, the keyboards the. . .

Moves I haven’t made in years are still there, like a wallflower waiting to be asked. I can dance! I’ll keep searching for an adult tap class but in the meantime I still have my tap shoes and a 4’ x 4’ piece of Masonite. . . 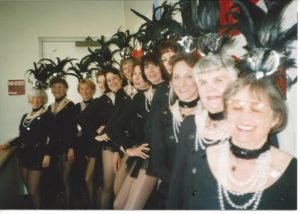