Death and the Person Inside 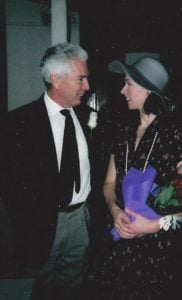 Some days it’s hard to avoid thinking about death. Not my death, but death in general. Yesterday was one of those days. February 13, 2020 would have been Bruce’s and my fourteenth wedding anniversary.

Last year I was still stunned by his death when the day rolled around. I thought this year would be relatively easy, as I’ve made it through the first full year without him. Much has shifted inside of me during that time, to cope with the loss and embrace the life that I have now.

How did the two of you used to celebrate?

We didn’t do anything extravagant, Lily (she’s my inner fourteen-year-old). Usually we’d decide on something special to make for dinner, drink fancier wine than usual and write each other anniversary poems. Last year I wrote him a poem; this year, it didn’t seem right. Too one-sided, I guess. Instead, I took time in the afternoon to do something different.

That’s because I’m hedging. Am I the only one who thinks it’s soothing to walk through a cemetery on a day like yesterday?

I know! And he isn’t. His ashes are still in the display case of Grandma Mary’s secretary desk, on the shelf below the dogs and cats. Make that the urns of the late dogs and cats. I have no more idea where our remains will end up now than I did the day Bruce died. Visiting historic Mountain View Cemetery in Walla Walla made me think about that, but mostly the experience was about feeling present among all those souls who’ve gone before.

In general, I like visiting cemeteries. To me they are full of spiritual energy. I come away feeling part of something larger than myself and grounded, too. There are the sad moments, especially reading the headstones of the babies, but also the thrill of locating the burial spots of Walla Walla’s noted pioneers, and the tingly strangeness of walking down a row in a way to assure myself I’m not stepping on somebody.

That part creeped me out.

It’s good for you, Lily. So are trees, grass, and quiet in the middle of a city. I recognized several names of people portrayed in the Living History Program at Fort Walla Walla. The socialite Isabella Kirkman’s impressive family monument is not far from that of Josephine Wolfe, Walla Walla’s most prosperous madam.

One of the prominent families in Walla Walla history, the Drumhellers, have a sizable plot. Suddenly I remembered: the woman who was the senior resident in my dorm freshman year had married a Drumheller! Dorothy Soper, when I first met her, was a beautiful and charming sixty-year-old lady who was wonderfully fit and sported a white pixie haircut. She got engaged to one of the Drumhellers that year. I hesitated before reading the engravings on the individual markers. She was there, and had been since the year 2000. She made it into her 80s, but still, gone too soon.

Poor Dorothy. Poor pioneer Walla Wallans. Poor babies. Poor Bruce. Death is fair only in its inevitability. When we’re gone, people who knew us will remember us until they die, but- –

Oh brother, don’t you get it?

What about Isabella Kirkman and Josephine Wolfe?

What about them? They’ve been dead for decades!

I know! But you still know who they are and that’s remembering them. We saw lots of other people walking through the cemetery when we were there, right?

After touring Mountain View we went to Colville Street Patisserie and did something both of us have wanted to do since summer, but it’s never been the right time: we tried one of their fanciful gelatos, strawberry-buttermilk.

You’re welcome. Good thing you have me or you’d never remember to do anything fun.

A good thing indeed, Lily. And you’ll be happy to know, continuing with our theme of death, I’ve arranged some fun for us tonight. By sheer luck I got the very last ticket for the last weekend of “Murder on the Orient Express” at Little Theater of Walla Walla. We’re in the back row, center seat. Someone had to buy that very last ticket, and tonight, that someone is us.

Cool! And I love it that we can go two-for-one.

Honestly, I’m grateful for the distraction. Because grief is a dynamic experience and it seems I’ve entered a new phase. The meaning of ’Til death do us part is, all of a sudden, crystal clear. As of yesterday, I truly understand Bruce is not coming back. My love for him remains but the marriage ended December 23, 2018. Last night, after nearly fourteen months, I took off our rings, matching wedding and friendship rings, his and mine that I’ve been wearing since the night he died. Everything in its season. Somehow, I know it is time. 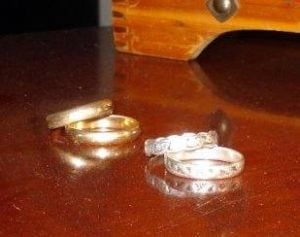