Distraction and the People Inside 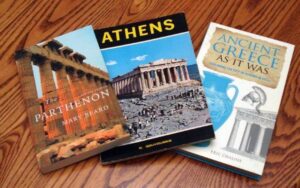 Distraction: Athens is a good one!

After two months of preliminary research reading I am now writing the first draft of book four in my contemporary fantasy/mythology series, working title “Beneath Big-G City” (or possibly “Son of Big-G City”). On day one, my self-set 1,500 word daily minimum rapidly spewed from my brain and fingers. Somewhere in there I needed to know how long it would take a commercial airline to fly from Seattle, WA, USA, to Athens, Greece. In these fast-paced digital days the research took mere minutes but. . .distraction immediately set in.

I looked at the one-way ticket price and realized I could fly from Seattle to Athens for eight hundred dollars! Probably less, if I shopped around. And I could do it right now- –pack a carry on bag of necessities, leave a key under the mat and call the cat sitter en route to tell her I was gone. What I would do in Greece was beside the point because: I. Could. Get. There! Some money and an incredible amount of recklessness were the only components required, plus a 7-day quarantine once I arrived.

Can we go, too? I want to see the Parthenon.

Thanks, Lily, thanks 9, I’ll add those to our distraction itinerary. Walla Walla winter (it’s snowing as I write this), plus the pandemic, plus a late-blooming travel bug are fueling my madness. And my voucher from Alaska Airlines needs to be used within a month. That could get me to Seattle, and- –

How many words do you have on today’s draft?

But it’s only 7:35 AM! Also, I’ve posted a research question on Facebook:

You are a 20-year-old human male with an extremely high metabolism and a bottomless appetite. The year is 2025, the month December. What are some of your favorite street foods?

I already have one response: Sabrett’s hot dogs. Kind of makes my mouth water. I’ll take a quick break and- –

You just had breakfast!

And it wasn’t nearly enough. I did mention it’s snowing, right? And I have a pickup scheduled at the library at 11 AM and a bank deposit to make. Maybe I’ll swing by the grocery store for extra cat litter and a half-gallon of milk because the forecast says there might be a two inch accumulation- –

You drive a Subaru.

Now cut the distraction and get back to work! You’ve left Cleo Petra in mid-flight, from Athens to Washington D. C.

On her way to spy camp!

And she’s just about to get a text from David Bernstein. They’re in love- –

But they haven’t talked for a week because they had a fight.

That’s where things are at this point, anyway. Over the past 25 years I’ve developed my own optimal approach to the first drafts of novels:

And this is okay. For me, first draft is rooted in preliminary research, a rough idea of major plot threads and a few briefly described key scenes. I’ve tried to write from detailed outlines a few times; this works for some people but quickly leads me to stagnation. When I take a more seat-of-the-pants approach it opens up a world of discovery. The characters show me passions and twists and turns that I couldn’t have imagined on my own.

When the first draft is done (this happens when I have a whole bunch of words on the page and at least one possible ending) I let the dust settle for a couple of weeks, then go back and analyze what’s there. Pieces get chopped, added and rearranged. A leading point-of-view character emerges and reveals the main plot thread. If I get confused I enter scene-level data to an Excel spreadsheet and track both story and character arcs to see what’s missing. Sometimes I draw pictures of how different plot threads and characters relate, and how they support an overall theme.

The central truth about me and the first draft of novels: I never know what the story is really about until the first draft is done. This is true even when I’ve worked with detailed outlines geared to formula-driven genre fiction.

You usually don’t write the blog until afternoon.

Okay, okay. I just hope the two of you aren’t too disappointed if we don’t jet off to Athens until we’ve finished the first draft. And don’t count on any locally procured baklava, either! Which reminds me- –

Get back in your chair.

Fine. But when a neighbor calls the police to request a wellness check because I haven’t left the house for ten weeks and they find my bleached bones heaped at my desk, you’ll be sorry.

True, but let me add a quick note to anyone out there who’s worried about Piebald, the cat, as reported last week. I switched him to a lower-fat senior kibble, which has improved his symptoms enough that a trip to the vet is not needed at this time. Fingers crossed!

And now, the author engages her two super-powers: steely determination and a cast-iron bottom. Firmly rooted at the desk, I’ll be here every day for fifteen hundred words or three hours, whichever comes first, battling distraction until the first draft is done.