Duty and the People Inside 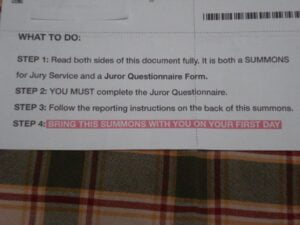 Some weeks are filled with excitement, others rife with drudgery. This week is a combination of both. I’m talking about duty.

Exciting drudgery. Isn’t that an oxymoron?

It’s probably right there alongside the cankered rose of Shakespearean fame, Lily. My first example is part of the responsibility shared by all registered voters in the USA. All month I’ve been on call for jury duty.

Not any movies I’ve seen, 9. At 1 PM about fifty of us reported to the Walla Walla County Courthouse, the pool of jurors for Superior Court. The courthouse itself is an attractive structure- -marble everywhere, sweeping staircases with polished brass railings, lots of fancy decorative plaster molding. It was a pleasure waiting on the stairs to the third floor, ascending slowly as each prospective juror was ushered through a metal detector and swept with a metal detector wand if the alarm kicked in. Was I the only person who felt the fleeting excitement of being in an airport, bound for exotic ports of call?

The next slow-moving line led to a table where we signed in and were issued numbered badges. I received number 35, and was told to sit where that number appeared on a courtroom pew. Everyone was quiet. It didn’t seem right to strike up a conversation with 34 or 36. Instead, I watched and waited for the defendant, lawyers and court clerical people to appear. Eventually we got the “all rise” and the judge entered. Call me old fashioned, but I think judicial robes are cool!

Having the right costume can definitely make a difference.

The judge welcomed us and asked some questions of us as a group, questions about causes to be excused from jury duty and about prior experience in the courts, including serving on a jury. We were instructed to hold up the numbered cards that matched our badges for affirmative answers.

What is it about the number thing?

It’s a procedure they have in place for juror confidentiality and security, 9. The thinking is that having your name out there during voir dire- –

The part where the lawyers ask potential jurors questions, 9. The thinking is that a juror’s privacy, confidentiality, even safety is more secure if they are referred to as (in my case) Potential Juror 35 than by name. This procedure remains in place throughout the trial.

Could be, 9, though I hope you feel safe with Lily and me!

At one point, the defense attorney started referring to jurors by their actual names. He must have had a cross-referenced list, which now that I think of it seems to defeat the goal of confidentiality. After he did this three times one of the potential jurors raised his numbered card and asked that we be referred to by number. The defense attorney threw his arms wide and asked our group if anyone objected to being called by their actual name. Murmurs erupted, heads nodded or moved from side to side. I held up my card.

“I object! The judge told us that this was the procedure and that numbers are used for our confidentiality and protection.”

Potential juror 34 nudged me with his elbow and said, “Thanks.”

The defense attorney, arms falling to his sides in a gesture that looked to me like mock humility, thanked me for my candor. The judge stated, firmly, that numbers, not names, would be used.

I think this was where my chance to sit on the jury evaporated. While I wouldn’t have minded serving and believe that showing up for jury duty is an important civic responsibility, I confess I left the courthouse at 5 PM with a “last day of school” feeling.

So ended duty number one. Duty number two was discharged at the Albertson’s pharmacy. In the interest of public health, I rolled up my sleeves for both the omicron booster and a flu shot. 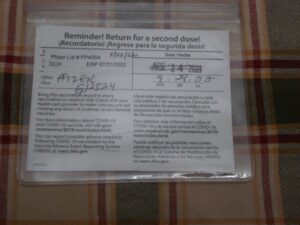 I know you do, 9, but it just took a couple of seconds and didn’t hurt at all. Until the next day. On Tuesday, several hours of sitting on a wooden courthouse pew made my rear end sore. Today, I’m a little bit fatigued and my biceps ache.

The price of duty.

But honestly, it doesn’t hurt that much.