Early Frost with the Person Inside 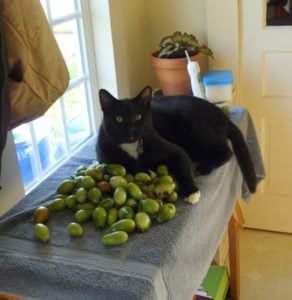 Last week I lamented the passing of summer. This week started with early frost! It usually doesn’t come until later in the month but these days you never know what the weather will do. Fortunately, I follow a weather website and covered my one remaining crop-in-progress, carrots, planted August 7, with dishtowels draped over a chicken wire frame. So far so good.

Early frost is a call to action for home farmers like me. I’d pulled the remaining tomatoes, all green, on Sunday. For two days I just stared at them, a salad bowl’s-worth in volume. Not one tomato offered the slightest hint of red and most were dark green and hard. Lily, my inner fourteen-year-old, was perplexed.

Are we going to eat those?

Yes, we are, a little bit as a time, over the course of several weeks or even months. What Lily doesn’t know is, this is the smallest number of green tomatoes I’ve been saddled with since I started growing my own produce in 2001. I’ve gained wisdom in the interval, in the form of two successful green tomato recipes. If you, too, are awash in green tomatoes, perhaps these will help.

Pour into greased 9×13-inch pan. Top with coconut if desired. Bake for one hour, or until a wooden pick or cake tester inserted in center comes out clean.

MY NOTES: This recipe came from somewhere online (apologies to whoever put up the original post for not giving you the proper credit). I don’t have a huge sweet tooth, so I cut the sugar (I used dark brown) to 1/3 of the amount stated in the recipe. I also found that 2 cups of flour was plenty; this might have been because I used whole wheat flour and/or because I substituted margarine for oil/lard.

LILY’S NOTES: Green tomato cake tastes okay. The baked tomatoes remind me of pineapple. Personally, I like frosting (cream cheese frosting would be a good choice). Whipped cream on top would be good, too.

Trim the stem and blossom ends from tomatoes and cut into 3/4-inch dice (you should have about 6 cups). Combine all ingredients in a heavy kettle; bring to a boil. Reduce the heat and cook for about 1 hour, until thickened.

Spoon chutney into hot sterilized jars, leaving 1/4-inch head space; wipe jar rims. Cover at once with metal lids, and screw on bands. Process for 15 minutes in a boiling-water canner, for 20 minutes for altitudes of 1001 to 6,000 feet. Over 6,000 feet, process for 25 minutes.

MY NOTES: I freeze the chutney in 2-cup quantities in freezer bags instead of canning (because canning is far too daunting for Lily and me). Also, I cut the sugar to ½ cup. Fresh ginger root was substituted for crystallized ginger. Good with black bean burgers, fish and pork.

LILY’S NOTES: The chutney tastes pretty good, but I doubt people twelve or younger would like it much. It’s kind of spicy and weird-flavored, like mincemeat, which I still don’t like.

We’ve brought in the spaghetti squash, an even dozen that now languish in the basement. Five zucchini are in the refrigerator (only one of them huge); three small ones on the hills out back might grow a bit more as the weather has warmed. We ate the last of the obscenely productive green beans last night, not as tender as earlier in the season but fresher than what you can buy at the store.

Now that the work is done, I’m thankful for the early frost. We now have a batch and a half of chutney to our larder- –

I hate that word, larder. It creeps me out.

Ignore her. We also have most of the green tomato cake tucked away in an icy tomb for later consumption.

Why do you sound like Vincent Price all of the sudden?

Well, it is October. Any idea what you’ll be for Halloween?

Don’t you think I’m too old for that?