Fairs, the Twilight Zone, and the People Inside 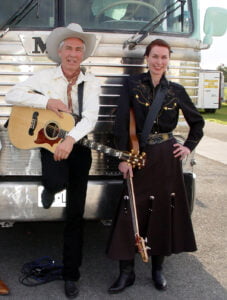 On the fair and festival trail in 2004: Nevada Slim & Cimarron Sue!

What do you think of when you think of county fairs? 4-H exhibits, animals, corn dogs, carnival rides, service clubs selling raffle tickets, a grandstand show or two, and lots of entertainers working all over the grounds to keep people amused. What you might not expect at a county fair is a quick trip to- –The Twilight Zone.

Mom won’t let me watch that, she says it will give me nightmares.

You don’t know the half of it, 9. I’ve been thinking about county fairs a lot lately, since many colleagues I worked with for ten years on that circuit are still in the trade (Bruce and I retired at the end of 2014). Most of them had a lean 2020, as live performance and public gatherings were all but extinguished by the pandemic. While gatherings such as fairs are still limited this year, lots of my friends have been able to return to work.

And lots of them are posting about their shows on Facebook.

They are, Lily. I’m happy to see their bright, shining, employed faces! Working and socializing with the other entertainers was one of the highlights of performing at fairs. Each and every one of them has great stories about their personal lives, their acts, and their lives on the road.

I, too, have some war stories from working fairs. Here’s one from 2012:

Bruce and I worked as cowboy music duo Nevada Slim & Cimarron Sue- -guitar, bass guitar, vocals, hats, boots, and a song list heavy on western folk tunes, plus western pop songs from groups like the Sons of the Pioneers. Accessible, non-controversial, family friendly stuff. We often worked ten or more fairs each summer, some of our shows on a stage, others “strolling” with our mini covered wagon, a converted garden cart with a battery-powered sound system inside.

It was on a stroll that we entered The Twilight Zone. 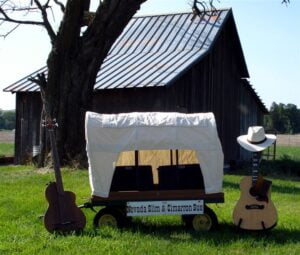 Picture yourself at the Umatilla County Fair, Hermiston, Oregon. It’s August, hot, late in the afternoon. You are midway through your fourth of four half-hour shows, this one a “stroll” set up near one of the entrances. Hot tub vendors to the left, food vendors to the right, people ambling in in pairs and groups, relaxed. Some turn up the wattage of their smiles when they hear your music, nod appreciatively in your direction. What could possibly go wrong?

An elderly couple stops in front of us to listen. Their mode of dress is old-fashioned, like what my wheat farming great aunt and uncle wore in the 1960s, the woman in a floral print house dress that buttons up the bodice and a straw hat perched on her head, the man in a nearly threadbare cotton plaid shirt, canvas trousers held up by suspenders, work boots and a wide-brimmed, sweat-stained hat. He’s a big man, probably six foot four, and as solid as a refrigerator. She is round and bespectacled, traces of cosmetic powder visible on her forehead and cheeks.

They look nostalgic, and sweet, and the look on their faces says they have a request. They want to hear “The Streets of Laredo” aka “The Dying Cowboy.”

Sure, we know that one. We fire up, Bruce, in his polished baritone, sings of the young cowboy come to no good. I join in with harmony when we put the cowboy in his grave. Pretty good rendition, I think, especially near the end of our work day.

But this couple. You can see on their faces they want more. The man leans in, his giant shadow enveloping us, and says, “That song is about syphilis.”

Something horrible, 9. We learned about it in health class last year.

It’s a disease, 9. Some people transmit it when they do the thing that makes babies that you and I haven’t discussed yet.

The man looks at us solemnly, but the woman has an icky-mean titillated expression on her face that is truly creepy. “Our grade school teacher taught us that in the one-room schoolhouse,” she says. “She was single.”

Bruce and I look at each other, smile politely, don’t argue with them about the song or its meaning but, given the lyrics, it seems a strange interpretation.

Today I did a bit of internet research on “The Streets of Laredo.” Here’s what I found:

The song is the offspring of the traditional ballad “The Unfortunate Rake.” Unlike the young cowboy in Laredo, the Rake (short for rakehell, a man habituated to immoral conduct, particularly womanizing) suffers from venereal disease, turned fatal by lack of diagnosis and treatment. The Rake’s lament is “I might have got salts and pills of white mercury,” items that must have been the cure du jour for syphilis when the song was written. So, in the historic sense, the single school teacher and these two folks who could have stepped out of a Stephen King novel were right.

What I don’t get is, why would a teacher say that to little kids?

That’s a puzzler for sure, 9. Sometimes education is a mysterious thing. Education is also one of the core purposes of county fairs. At the Umatilla County Fair not only did Bruce and I have an educational moment, it was also a moment infused with a Twilight Zone feel for entertainment value. Double score!

I’m not really understanding all of this, but I did get the part about corn dogs. Are we going to the fair this year?

Sad to say, 9, we’ll be out of town that weekend. But let’s try the hot dog takeout place downtown sometime soon. Like on Adam West Day, September 18.

I love Adam West Day! Can we dress up for the occasion?

Yes we can, Lily. I’ve heard the Batmobile and the Batcopter will be on display downtown, and there will be live music in the plaza, though I’m pretty sure no one will be singing “The Streets of Laredo.” 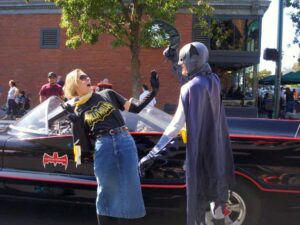