False Fronts and the People Inside

Ever visited a Hollywood back lot or seen pictures of one? If so, you may have viewed street front sets from the side and marveled at how an imposing multi-story brick façade conceals an imagined interior. It is a false front, a single wall supported by braces.

This architectural trick appears in real life, too, as a roof line feature. Here’s an example of a false front in Walla Walla, WA: 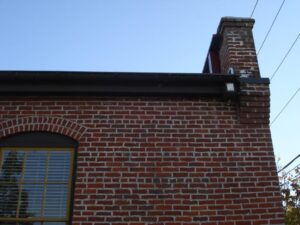 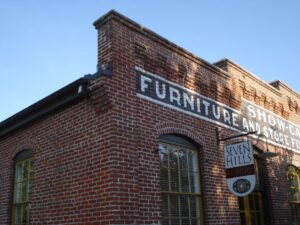 Weird! I get it about the movie sets, they’re make-believe. But what’s the point in a real building?

Good question, 9. According to www.oldhouseweb.com :

“Almost always used for commercial purposes, false front buildings gave an air of dignity to a quickly growing town by providing visual continuity along the street.”

So I guess that’s why there are lots of these out west?

That makes sense, Lily. The founders of western towns would definitely have been interested in making their fledgling settlements look impressive, solid and legitimate. It’s pretty inventive when you think about it: creating a bigger, grander impression with the limited materials available.

It’s like when cats turn sideways and arch their backs, to look bigger.

Good analogy, 9. Years ago I worked for a pretty harsh boss who was a few inches shorter than me. When he did something that made me mad (which happened a lot) I’d wear boots with three-inch heels to work the next day.

Thanks for the snark, Lily, it brings me back to earth, and to the earthy subject of my frequent personal experiences with false fronts. It has to do with performing.

In recent blogs I’ve mentioned my new Living History person, Nellie Gilliam Day. I’ve portrayed Nellie in a few different years- -1906, 1911 and 1918. Fashions didn’t change too much between 1906 and 1911, but in 1918 a major revolution in women’s wear occurred. It had to do with World War I, the shortage of materials and the overall need to simplify and economize. Major side benefit: those who dared could shuck their corsets!

It seems logical that Nellie, both ahead of her time and in her 60s when this apparel shift was made, would be a shucker. The dress pattern I found for her fits much looser in the waist than previous styles. All well and good. Once the dress was finished, however (thanks again, Diane and Audney!) I realized something was needed in the bodice to make it hang right.

Guessed it in one, Lily. A bit of deception was needed to amplify my upmost proportion. Fortunately I have decades of experience with such slight-of-hand. You could look long and hard to find a dramatic character who boasts the cup size Nearly A.

In general, I’ve learned two approaches to this. The first we’ll call the taping method (TRIGGER WARNING: this is kind of weird!). Athletic tape is used to harness even small breasts into a configuration that creates a bit of cleavage, which can be amplified with contouring makeup. On a proscenium stage with several feet between the footlights and the audience, something as drastic as a dark “Y” can be drawn between the imprisoned breasts to enhance the illusion (which works pretty well unless you turn sideways).

For Nellie, audiences are closer and, thankfully, cleavage is not on display. On to costuming false front approach number two, the Stuffing Method.

It’s simple, really. Go to a thrift store and find the desired size of bra. Put bra on body and stuff. In civilian life, there’s the high school girl method that uses Kleenex for padding. A drag queen friend told me he prefers balloons filled with birdseed, which tends to have a bit of motion that better mimics actual flesh.

Much like those ambitious frontier main streets, I use the materials at hand–quilt batting in years past, and, under tap dancing costumes, two sets of shoulder pads stuffed down my actual bra (when I still had one).

On to the present day and Nellie. There was, in fact, a bra in my dresser, one that was two sizes too big that Maidenform ® had sent as part of a “Buy three and get one free!” rebate program. I was irritated at the time but now, how fortuitous! With a pair of ankle socks and a pair of thin bikini-top pads to hold them in place, I was set. 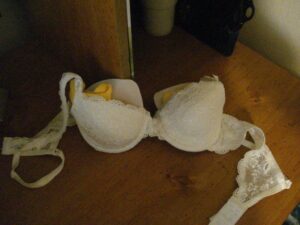 *appearance or manner intended to deceive

Falsies fall under definition three, though I marvel that anyone would be truly deceived by a padded (or taped) chest. However, experience teaches otherwise.

In the mid-1980s I attended a costume party. I wore a snazzy 1950s dress with a full swishy skirt and a bodice with darts to accommodate a vast bullet bra. Most people at the party knew me, but there were strangers, too, and a strange thing happened, so strange it inspired a poem:

A Case of Padding

It’s not Halloween, Mardi Gras or any special reason,

To be restored to grandeur when the money’s there for fashion.

Fashion was my watchword, too. A vintage dress I’d selected,

The kind our mothers wore about the time Ike was elected,

In seafoam green, a tres chic hue worn in the nineteen-eighties,

And thirty years before then, by stylish bridge-playing ladies.

The dress was quite a steal; from Deluxe Junk it came,

A retro place in Freemont, and one quite aptly named.

It fit just so in tiny waist; broad shoulders, too, sat nicely,

But damnable darts, for bullet boobs, had me cursing thricely.

“Damn, damn, damn!” I said out loud, behind the fitting room curtain.

The clerk’s voice on the other side said, “You’ll want this, for certain.”

The curtain parted just a touch and in came the solution;

A padded bra, with “D” cup, completed my evolution.

A 1985 girl skipped to times three decades past,

An era when her smallest charms would not be counted last,

When chests got noticed well before bright eyes or style of hair,

And no one looked too closely to make sure the goods were there.

The mammoth darts were padded full. I paid up and flew away

To pile up hair and redden lips for the costumed grand soiree.

Upon arrival, I was met with laughing roars of “Hug me!”

From male friends who’d not imagined this enhanced view of me.

But not all there were folks I knew. The party started swinging.

The music blared, a dance did start, with all but buck and winging.

I joined the dance. My feet flew but my bosom stayed in place,

Anchored stiffly as a collar of Elizabethan lace.

Whether dearest pal or new-made friend, the girls knew at a glance,

But one poor fellow – – maybe drunk? – – went rogue and took a chance

To strike up a conversation. And the color of my eyes?

Ah, no, he’d fixed on something else, something of greater size,

Two somethings, to be plain. His eyes were like two magnets, drawn

To twin foam rubber missiles. His conversation rolled on,

His remarks to bosoms faux. I inhaled gleeful laughter

That once released, I feared, would explode me to Hereafter.

Made a foolish picture. Would his cheeks burn with surprise

If he learned my full-formed secret? That I never came to know,

For I played my padded hand ‘til it was time for me to go.

I am so embarrassed!

Maybe now, 9, but you’ll laugh about it when it happens.

Because why put up a false front if you don’t intend to have some fun with it?