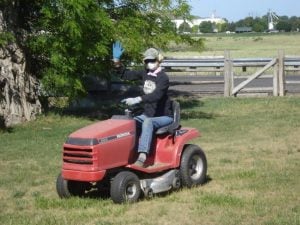 Glad I don’t have to do any farm girl fixes on the old Honda mower! From our former place in Prescott, WA.

It’s a big adjustment, being the only human in the household. Not only do I have 5 four-legged kids to attend to, but everything else, too. Like repairs, when things stop working the way they should. If it’s plumbing, I call a plumber. For other repairs, I’ve been following in Bruce’s footsteps, but with a twist: adapting his “farm boy fixes” to farm girl fixes.

Bruce summarized farm boy fixes as being able to repair most things with baling wire and chewing gum, an especially good talent to possess when it’s a long trip to town. True, I no longer live 20 miles from groceries on a two-acre parcel surrounded by thousands of acres of wheat. However, the “use what you’ve got” farm girl fixes mentality moved with me to Walla Walla. Two examples from this week:

Our vacuum cleaner, believe it or not, is kept in working order courtesy of extra screws to hold the handle together and a clamp to override the power switch that somehow lost its ability to stay “on” without continual external pressure. The aforesaid handle recently cracked apart in a new place. For a brief while, I resolved to get it over with and buy a new vacuum cleaner. Enter the farm girl. Why would I do that when I have a perfectly good roll of Gorilla Tape? 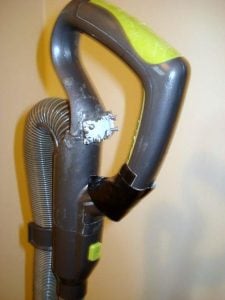 Fix example two requires some history. When we moved to Walla Walla last May, our single biggest concern was keeping the cats in the yard. To that end, we had a 6-foot cedar fence built, which Bruce adapted with dowels and netting to create a 45-degree angle barrier at the 5-foot level. The theory is, if cats look up and see something above their heads, they won’t challenge it. This worked beautifully until the first snow, Sunday night (which also blocked the Blood Wolf Super Moon, just for spite). Monday morning I looked out the kitchen window and thought something looks different. Nearly all the dowels had snapped and the netting sagged toward the ground. I won’t report my verbal response to this discovery as it’s not fit to print (at least, not in this blog).

Enter farm girl fixes. I’m hopeless with power tools and, in fact, was barred from using them in college theatre production class when I almost sawed through the power cord of a jigsaw, after which, I was consigned to cleaning paint brushes for the rest of the academic year. But I digress. How to repair the cat fence? I knew there was an answer, and by mid-morning I had it: bungee cords! I thought Bruce had several of these in the garage, but no. In the interest of expediency, I broke the “use what you have” rule and drove to Harbor Freight, where I purchased two canisters of assorted bungee cords. Back home, I hooked the bungees to the broken dowels (which are still attached to the netting with zip ties) and secured the other hook to the top of the fence. The restored more-or-less 45-degree angle isn’t pretty, but it works! 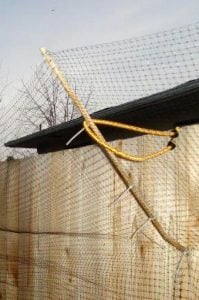 These two victories boosted my confidence and yesterday I almost- –almost!– -succeeded in giving Friday his weekly subcutaneous hydration treatment at home. We were perking along just fine until he got restless and the needle popped out. I tried twice to reinsert it, but the second time he yowled and it’s my policy not to stick him more than three times in any one session. Overall, he got about one-quarter of the fluid he needs, so we’re visiting the vet this morning to set things right. I feel good about the progress I made, with only mildly shaking hands and no tears.

Whether you’re recently widowed or not, there’s always something new and different to face every day. I’m grateful to have farm girl fixes in my life skills toolbox; also, a big roll of Gorilla Tape. 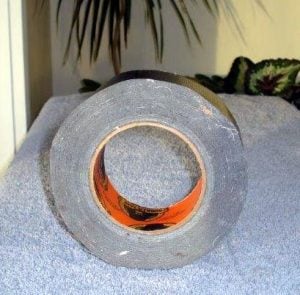