Fashion and the Person Inside

My good friend Lily, aka the 14-year-old person inside, cheerfully provokes me on a regular basis. This week, she critiqued my fashion sense:

Your gray sweatpants are twice as old as I am! They look dorky. You’ve got those sparkly NIKE leggings Bruce bought you two Christmases ago and you never wear them. Those would look cute for workout clothes.

Lily is referring to my Nike Women’s Pro Cool Sparkle Training Tight Pants (try saying that five times, fast). Bruce bought them at Macy’s on a whim. He’d pointed to them where they were displayed on one of those half-mannequins that goes from the waist on down and told a nearby clerk he wanted them for his wife. The clerk skeptically eyed Bruce’s white hair and asked what size.

“That size,” he said, pointing to the mannequin. “That’s exactly what she looks like.” 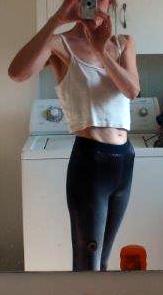 This wasn’t the first time he’d made such a fashion selection for me. I also have a very cute short knit dress that laces up the front that he spied on a mannequin in the display window a few years back, junior size small. The dress and the training pants do fit, but while I’m not particularly shy about appearing as “mutton dressed as lamb” as they saying goes, I haven’t worn either of these garments since Bruce died.

On Monday, that changed. The sweatpants belonged to my Grandpa Denny, who died in 1996. I work out at home and am free of having to look decent while doing so, but the sweatpants are so old and so used they barely stay up anymore. The tank top I wear with them is from a county fair, the year 2008 printed above a decade of sweat stains. On with the sparkly leggings! On with a crop top! Once again, Lily’s fashion sense has challenged me to up my game. 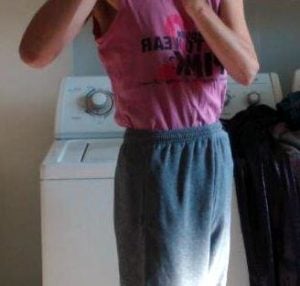 Laundry room selfie: my default workout togs for the past decade or so.

I’m finding more and more that I can take joy in memories of Bruce, and the recollection of his funny, sweet, flattering gifts makes me smile. That doesn’t mean grief is at bay. I’m learning that the grief from losing him will never entirely leave, and that’s okay. With the help of C. S. Lewis, I’ve discovered a helpful wrinkle on what the death of a spouse means. In his brief nonfiction book A Grief Observed, Lewis eventually gets to stating that grief is part of a complete marriage, as much a part of it as the honeymoon, for instance.

It took me a while to digest this thought, but it eventually inspired in me a sense of incredible calm. Bruce and I had experienced a complete marriage. We’d both done what we’d promised to do, February 13, 2006, at high noon in the Jefferson County Courthouse. We’d stayed together ‘til death did us part. If you know me well, you know that I’ve been married three times. My first two marriages ended in divorce, aborted efforts at finding happiness ever after. Note: happiness ever after is not included in standard marriage vows for a reason. I was Bruce’s fourth wife.

With each other, we made it to that promised finish line. When we first learned his prognosis, a scant twelve days before he died, he said he’d never really believed that anyone would love him enough to take care of him the way I would. It is a powerful experience, nursing and comforting the person you love most at their life’s end. A deeply sad experience, too, to watch a beautiful life ebb away. But isn’t giving and receiving this type of love and support a big part of why we marry? Recognizing and acknowledging our complete marriage helps me feel whole.

It’s too warm now for the sweater dress, but not too late for this old ewe to put on her lamb suit when autumn comes. With Lily’s encouragement and unerring sense of fashion, life is regaining its sparkle. 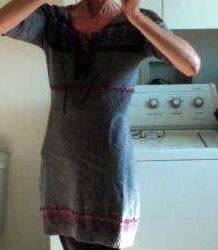 Laundry room selfie: the short knit dress. A bit wrinkled, but aren’t we all? And, BTW, Baaaaa!