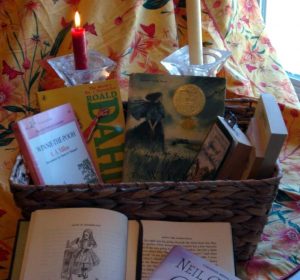 Were any of these your favorite childhood book?

Back in the dark ages, shortly after the dinosaurs went extinct, I was a kid who loved to read. If someone asked me which book was my favorite I couldn’t have answered. There were so many! L. Frank Baum’s “Oz” books, The Narnia Chronicles (C. S. Lewis), “Little Women” and others by Louisa Mae Alcott. Grandma Mary loved the “Little House” books by Laura Ingalls Wilder and made sure we had the complete set. There was a wonderful book I discovered in seventh grade, though I can’t remember the title. The story mixed magic with the everyday. A girl named Leni was the heroine. She lived with her aunt, who was a witch, and had a dachshund named Wuenschell. Leni’s bed was shaped like a sailboat and her bedroom carpet was grass interwoven with daisies.

The book with the unremembered title opened a happy door in my imagination. I was enthralled with the adventure, a girl and her dog fighting something so evil it could destroy the world. As clearly as if it were happening right now, I remember walking home with my best friend, the book stacked on top of text books for that evening’s homework. She, too, had a library book, “The Pink Dress” by Anne Alexander. When she read the title of my book and looked at the cover art (a girl, a dachshund and a clock tower with a malevolent owl circling it) she said, “That book’s for babies,” and walked extra fast to get ahead of me. I was devastated. We didn’t talk to each other for a long, long time.

Looking back, I’ve started to understand. My best friend and I had the exact same birthday, but she was one year older than me. On the verge of turning twelve and thirteen, we were in far different places on the continuum between child and young adult, at least in regard to our literary preferences. I was content with fantasy; she wanted the reality of special dresses, school dances and boyfriends.

Growing up is hard. Everyone’s changing at different rates in the hormone-fueled race to become themselves. Younger kids watch older ones test dangerous waters formerly reserved for adults. Books can act as a pressure relief valve, a place to retreat to more comfortable times or move forward to learn what’s just beyond the horizon.

I was discussing children’s literature with a local bookseller last week, specifically what’s new and what’s selling these days for Middle Grade (MG) readers (ages 8-12). This group of readers is of special interest to me, as I’m both querying literary agents about my completed MG historical novel and outlining a contemporary MG novel to be written in the coming year. The bookseller and I lamented about the seeming dominance of video games over books. We discussed the rise of graphic novels and the appetite for action at the expense of plot and character development. In short, we were preaching to the choir. On my way home from this meeting I could have fallen into a deep depression; instead, I started thinking about how to persuade a kid of today to read some of my favorite childhood books.

This is a tricky question for me because I don’t have kids of my own. One idea has surfaced. Many years ago I bought “Holes” by Louis Sachar for a young cousin’s Christmas gift. Her mother had recommended the book, apparently one the girl’s favorites. Being skeptical by nature, I checked out a copy of “Holes” from the local library and read the darn thing. It was full of life, not just the darkly humorous story of a bad episode for young protagonist Stanley Yelnatz, but the larger story of crime, punishment and redemption. Wow!

In essence, I had read and enjoyed a book recommended by a kid.

Here’s my plan. It’s a type of exchange. I will enter into an agreement with a kid to read their favorite book if they will read one of my favorites. Then we can share our opinions about the books. Maybe this can happen at our local library. Maybe other kid and adult teams will join in.

Time traveling back to seventh grade, I did read “The Pink Dress” to see what it was all about. I wasn’t at the point where I appreciated the girly fuss of dances, dresses and boys; it seemed pretty dull, compared to beds shaped like ships that sailed through the air at night. But reading “The Pink Dress” helped me understand my friend a little better. After a while we started talking again and walking home together, though we were never as close as we were in grade school, especially in fifth grade, the year we teamed up for a science project and constructed unintentionally lop-sided balls from shredded newspaper and flour paste to represent the planets in our solar system. By ninth grade we were traveling in our own orbits, but every so often we’d cross paths or come to each other’s defense.

Sharing our stories. That’s what holds it all together.