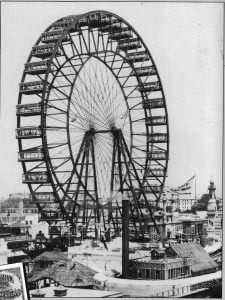 To most carnival-goers, the Ferris Wheel seems a safe ride. It moves slowly and offers a bird’s-eye view of the carnival grounds. Its gentle motion is unlikely to inspire vomiting.

Port Townsend, WA, was the scene of a Ferris Wheel accident last week. The city was in the midst of celebrating the annual Rhododendron Festival (locals call it “Rhody”), part of which is a four-day carnival. Funtastic has been the carnival vendor since I was a kid, and probably before that. It was a gondola of a Funtastic Ferris Wheel that overturned and dumped three passengers to the ground. Some reports say the drop was 30 feet but most news sources say it was 15. Either way, it was quite a drop. Miraculously, only one of the passengers was seriously injured. Reports conflict as to whether the accident was due to equipment failure or the alleged misbehavior of the passengers, said to be standing in the gondola when they’d been clearly instructed to remain seated. The gondolas of this particular Ferris Wheel do not have seat belts; this is how the manufacturer built it. If Funtastic had opted to install seat belts, it would have voided the manufacturer’s warranty. The State of Washington has since revoked the license for this ride.

A sad story. My heart goes out to all who were harmed by this incident, including those injured (regardless of fault), the carnival itself, and innocent bystanders who witnessed the drop. My own Ferris Wheel incident came back to me in vivid detail.

I was twelve years old and it was Rhody Festival. Cheryl, my best friend from sixth grade who’d moved to Walla Walla the year before, was visiting for the weekend. The weather was perfect, sunny days and nights so warm you didn’t need a jacket. It was Saturday, the day of the Grand Parade. We watched marching bands, floats and car clubs pass along the route in front of my parents’ house and afterward jaunted two blocks downhill to the carnival.

The carnival was a major entertainment and social event for kids. As seventh graders, we were independent of parental supervision at this venue. Groups of roughhousing boys and giggling girls passed each other on the Washington Street midway. The air was perfumed with popcorn, cotton candy and diesel exhaust. Everyone in our class wanted to see Cheryl and I enjoyed her being in the wake of her celebrity.

It was a simpler time than now. The most daring ride available was the Hammer, followed by the Octopus. We opted for the Scrambler (tame, but movement erratic enough to make me queasy) and. . .the Ferris Wheel.

Who would look at a Ferris Wheel and think it was any more dangerous than a Merry-Go-Round? Certainly not me on that day. Popular Cheryl sat in the middle of a car three of us shared. The ride operator latched the safety bar across our laps and we rose, our gradual ascent a halting progression until all the cars were loaded. Once the ride was full, the continuous revolutions began. We laughed, smiled, pointed at the people milling around below. Our long hair streamed behind us. A section of mine caught in the right-hand axle that held the car in the wheel’s frame. I noticed but thought nothing of it. Not until a full revolution had passed. It was then I realized my head had started tilting, my hair winding tighter and tighter around the axle.

I don’t remember how I relayed this disaster to my friends. I do remember we all started screaming and gesturing wildly at the ride operator, who didn’t understand what had happened until the wheel had made another full revolution. By the time he stopped the ride with our car at the bottom, my head was flush against the axle. The three of us were screaming and crying. The ride operator let the other two girls out. He pulled out a knife.

A crowd had gathered. Out of it shot a 14-year-old girl, my big sister. In an instant she was in the operator’s face.

“You will not cut my sister’s hair!”

The operator grunted and headed toward me, knife ready. He hadn’t reckoned on my sister’s follow-up line, “Our dad is the city attorney!”

The man swore. A couple of co-workers standing nearby joined him in removing the car and unwinding my hair, but the action was far from over. My sister seized her boyfriend (who easily outweighed her by forty pounds) by his shirt front and pressed him skyward, his feet inches from the ground.

“Run up the hill and get Mom!”

According to Mom’s later report, the boyfriend arrived winded. She returned to the scene with him and walked me home. Cheryl was staying at our house so she came, too. Mom checked me over. The right side of my head throbbed and she said it was already bruising. She washed the axle grease out of my hair in the kitchen sink. A big clump of waist-length hair came out in her hands.

Seventh grade is a hard time to be sporting a bald patch on the right side of your head, especially if you are a girl with waist-length hair. Fortunately, there was enough left to comb over the spot. This worked fairly well, unless the wind blew, as it usually does in Port Townsend. Eventually the hair grew back- -curly! For months a springy section poked out from my naturally straight tresses. Eventually the length evened out and the curl pulled straight.

What’s the take away from this trauma? First, it’s good to be alive. Second, if you have long hair, make sure it’s contained before you get on a carnival ride. I’ve been wearing mine short for 40+ years. Have I been on a carnival ride since then? For some reason, I can’t remember.