Fiction: From Life, with Cat 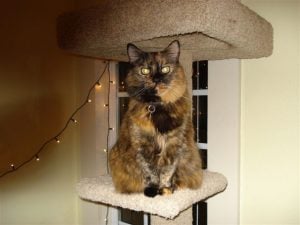 I’m posting early this week due to travel. For a break from topics about writing (or, when I just can’t stand it anymore, social and political issues), here’s a short story, first published by THEMA Literary Journal, Summer 2008 Henry’s Fence anthology. “Henry” is an example of writing to a theme, also of fiction inspired by a family member, the cat Arial. Her markings and gender were changed to protect the innocent. Arial not only relocated across Washington State with us, she also accompanied us on our music tours 2007-2010. She left this world in 2010 at approximately 15 years of age and will be forever missed.

Henry was large, orange, fixed and annoyed. But it wasn’t the fixing that annoyed him. That event, from his feral youth (starting with the enticing aroma of teriyaki oysters in a Havahart trap and ending with anesthesia-fogged soreness and a temporary blow to his pride), was far in the past, coming to mind only when the woman’s minivan followed the path to the vet’s. It was that other thing cats hated even more than fixing, more than having tartar chipped off their fangs. More, even than the indignity of being forced onto a scale on which some variety of small dog – – probably a Boston terrier like that nuisance from the other side of the fence at the old house – – had peed. Disinfectant was no antidote for the canine reek of it all. Against Henry’s iron will and brandishing of claws, he was weighed, subjected to the vet’s tisking, and prescribed a skimpy diet of senior kibble. It was not even the diet, not even the annual vaccine or the monthly dose of flea medicine between the shoulder blades, the one place his tongue couldn’t reach to lick it off. It was none of that. It was the “m” word. The woman and the man and Henry had moved.

The week-old, half-faded memory of their cross-state trek recalled seven hours of feline outrage. Henry had yowled his disapproval without cease for the first solid hour, trapped in a wire kennel (that had come in a flat box bearing the image of a grinning idiot of a Springer spaniel, so who could guess it would unfold into a cat prison?); albeit with his favorite tartan blanket, plus food and water dishes clipped to the inside of the door and a half-sized litter box. When his voice grew hoarse from yowling, he’d instituted a silent protest by forsaking his blanket and curling up to nap on the clean sand of the litter box. Besides, the embrace of the high plastic sides around his back made him feel secure.

Henry yawned and stretched in the afternoon sunbeam as it crossed the woman’s pillow. The hard memory of his voyage softened and dissipated, though he remained peeved about the continual state of house arrest he’d been under since the moment of arrival. He barely knew where he was, his only impression of the outdoors viewed from sunny windows with wide sills, sills low enough for a cat of impressive girth to ascend in a single leap. Not that he’d had much time for this, what with the exhausting work of moving. Henry’s eyelids lowered over his round, green eyes. The dogs in the new neighborhood were large, quiet and far away. And the birds – – all kinds of new birds with riveting, foreign songs – – made him salivate with their lullaby. He inhaled the scent of grass wafting through the screened windows, green grass, but not wet, which had irritated his paws and his well-earned sag of belly. The high flavor of dried shrimp coated his tongue, a treat from the woman when she’d scratched him between the ears and left the house that morning to join the man in the back yard. Every so often their work, whatever it was, broke his dreams: the thud of metal breaking earth, the scent of dirt wafting past his twitching whiskers, the bite of wire against wood. Henry stretched his legs and husked a loose claw casing from his left front paw. The people were entirely off schedule; someone should be in the kitchen now, opening a can of tuna and draining the water into Henry’s dish, or carving him a tidbit from the block of sharp cheddar cheese. Surely they understood the suffering all the changes had put him through these past several days, could show him more than the usual sympathy? He could barely fall back to sleep for his indignation.

Henry had relocated to an empty cardboard box, one of many, when his people returned from outside. The woman laughed and scooped him into her arms, and they both started cooing to him. Henry did not resist, as his half-sleeping awareness recalled this type of behavior generally led to something good. Like a few days ago when they’d let him out of the utility room and he’d discovered all the other rooms (empty when he’d been incarcerated with washer, dryer and a host of unpleasant soapy smells) now piled with chairs, tables, lamps and stacks of boxes with the faint aroma of mouse. The woman had carried him to the room at the far end of the house where he discovered their bed, and his bed of flannel-encased pillows on a handsome rattan bench. Given the stress of that particular day, he’d kneaded his pillows into a nest and napped until dinnertime.

From the cradle of the woman’s arms, Henry shook his groggy head, sneezed out some cardboard dust, and wondered what awaited him. He felt dull this afternoon, exhausted from a week of solid work, making the endless circuit from room to room, marking each piece of furniture, every cardboard box and its contents with a rub of his forehead that left a trace of his scent. He’d had neither time nor energy to chase a piece of string or bat his catnip mouse, and little time to perch on sun washed windowsills to ponder the new outdoors.

The woman carried him through the house to the laundry room where his litter box was discreetly tucked under a shelf. But – – he nearly twisted out of her arms when a tickle of summer breeze ruffled the fur on his belly. Air. Air was moving all around him!

The laundry room door, the one Henry had stood on his hind legs and studied for some portion of every day, willing the brass knob to turn and open to what his ears and nose and whiskers sensed was the outside, stood wide open.

His whiskers twitched at the fragrance of leafy bushes and supple grass as the woman set him on the warm planks of the porch. Luscious bird song swelled in his ears. At first, all he could do was sit still, soaking in the delicious, immediate sensations of the outdoors. But soon the bush to his right rustled, maybe just the breeze but maybe a small variety of bird; better to slink down the steps and tread silently through the garden bed than to let the opportunity pass. When he emerged from the foliage, his lengthy and fruitless but ultimately satisfying exploration complete, Henry sauntered a few yards toward the man and woman who sat in plastic chairs from the old yard, sipping drinks from tall glasses that chimed with ice cubes. He brushed against their legs and stretched his neck toward their caressing fingertips. Strolling beyond the chairs, Henry rubbed his side along galvanized wire mesh, his head against a wooden post. He walked the perimeter of his outdoor kingdom, pausing here and there to stare through the fence as the tip of his tail quivered in response to chirping and the rustle of leaves overhead. The man and woman’s glasses clinked together. “To our new home,” the man said, “and to Henry’s fence.”