Fitness and the People Inside

The urge to pursue fitness can come from unexpected sources.

In October 1998 I visited a friend in Glendale, CA. We’d been friends for decades, though we quite different from each other. At that time he was a well-established sitcom camera man, working on both Veronica’s Closet and Friends. His passionate avocation involved looking through a lens, too- -he was an avid amateur astronomer, much more interested in stars than planets, with two frequently used vast and vastly expensive telescopes to prove it.

That’s why I was visiting him. I was working on a novel (never published and looking back on it I’m glad) with an astronomer protagonist. It was part of a research trip that involved a visit to CalTech (in classrooms they were discussing the Mars missions that are now so familiar to us), and a two day trip, courtesy of my cameraman friend, to Joshua Tree National Park to do some high-quality stargazing. 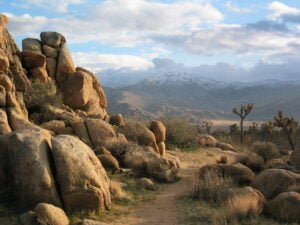 Scenic fitness: Joshua Tree. Photo by my friend Vernon, who went to walk among the stars October 2016.

The trip was as splendid as it sounds, and on it I witnessed the most beautiful event I’ve ever seen: the shift from night to day on a high-elevation desert, a clear and dramatic view of the Earth rolling into its shadow.

That sounds amazing. Do we really get to see it or are you embroidering the truth?

No embellishments, Lily. I still think of that moment with awe.

Good! Because for a minute there, I thought you were going to talk about fitness.

Thanks for reminding me, 9. Here’s where the fitness part fits in. This friend of mine was a bachelor, then in his 40s. He’d lived alone most of his adult life and had a tidy, solitary, quiet apartment all to himself. Some of his married friends were envious: impressive and high-paying job that he loved and in which he excelled, an interesting and expensive hobby, an autonomous lifestyle. At the time I, too, was married, and felt that same pang of envy: I wanted to live what Vernon’s friends called his Boy’s Life.

Though Mr. Boy’s Life was not a fitness guy, somehow I decided improving my own physical fitness was a pathway to autonomy. Maybe it had something to do with my approaching 39th birthday. Whatever the cause, when I returned home I started using a cumbersome cross country ski contraption purchased from Sears a few years earlier. I upgraded to a Nordic Track twenty years ago and have used it 30 minutes per session, three times a week, ever since.

I prefer to think of it as meditative, Lily. Soon I added a Pilates and Yoga routine, also three times a week. What started off as ten minutes expanded to thirty. I was doing three hours of deliberate fitness every week! A couple of years ago I added brisk walks, three to six times a week, two to four miles in length. When the pandemic hit and I was spending too much time confined to the house a friend recommended online core Yoga. I tried it and haven’t stopped, three times a week since May 2020.

You may have a point there, 9, but I prefer to think of it as crazy like a fox. I figure the more fit I am, the healthier and stronger I’ll be. This summer I added swimming- –

Don’t worry, Lily. After a couple of weeks I traded a session each of Nordic Track and walking for a session of swimming. I’ve settled into one cardio activity and one Yoga or Pilates session per day.

How many hours a week does that take?

But why? Are you training for a pentathlon that combines walking, swimming, Nordic Track, Pilates and Yoga?

Yeah. I mean, it’s not like it’s an Olympic event.

A custom pentathlon. I like the sound of that.

Stop her! Stop her now!

I’ll make you a deal, Lily. Find me a tap dancing class in Walla Walla this fall and I’ll trade out the swimming. 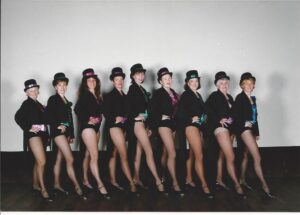 At least tap is a practical skill. You might need to do it in a show sometime.

Couldn’t we just go watch a baseball game or something?

Sure we could, 9, but one game can take hours. With all this exercising, where will we find the time?

The marriage I was in in 1998 ended in divorce. I’ve been through another since then that made it to ‘til death do us part. The past few years I’ve been on my own- –

With you both. I acknowledge that I spend a lot of time on fitness, but the older I get the better it feels to maintain and improve my balance, stamina and cardio health. That, plus the two of you, seems a pretty good method for following in the footsteps of my friend Vernon and living my own Girl’s Life.