Food and the People Inside

Since my annual exam (early July) I’ve been re-configuring my relationship with food. It was there that I expressed my concern that my weight has gone down a bit more during our current period of lock-down. Though I’m pretty sure this is due to doubling my customary amount of exercise (there’s nothing like a walk or a session of Core Power Yoga to ease the stress of isolation and shortage of entertainment options), I wanted professional medical input as to how much weight loss was too much weight loss.

It was no surprise that my trusted nurse practitioner advised me to gain 5 to 10 pounds. I’d experienced a serious energy sag on that morning’s walk and had also taken a critical look at my now very prominent ribs and sternum in the mirror. Surely I’m not the only one who loses track of such things because there’s no one observing me every day, especially in an unclothed state?

Hi Lily. What’s your perspective on this as an inner fourteen-year-old?

Generally I believe there’s no such thing as being too skinny, but I think you’re, you know, too skinny. You’re an adult, you’re three inches taller than I am and we weigh the same. Plus, the ribs and sternum thing . . .

That’s a sobering opinion from someone as weight-conscious you. What do you think, 9?

Honestly, it’s a hard problem for me to imagine. I have to look for clothes in the chubby girls section, you know. Kind of like, don’t rub it in?

Sorry, 9, and I think a lot of people can relate to that feeling. But one thing I’ve learned over my 60 year relationship with food and weight: ALL weight problems are, in fact, problems. And for someone like me, now, with my nutritional biases and God-given stubborn nature, it’s hard to gain weight. It would help if I could enthusiastically embrace the vision of the “new” me, someone with a slightly higher BMI that matches the one I had before Bruce got sick. I’m thinking about him a lot  this week. It would have been his 72nd birthday today.

So bake him a cake! Chocolate is my favorite, with lots of frosting.

Funny you should mention that, 9. Last night I baked Velvet Spice Cake (Joy of Cooking, 1975 edition, Ninth Printing, January 1978). It’s the first cake I ever baked for him, for Valentine’s Day 2000.

It sounds good to me. If I ate that kind of thing, that is.

I know what you mean, Lily. I’ll have a piece tomorrow, probably another one over the weekend and then put the rest in the freezer with all the other left-over baked goods. I’ll work through them eventually, but- –

You still have a full loaf of pumpkin bread that you bought at a silent auction last November.

My idea of everyday food is fruit, 2% milk or yogurt, eggs, fish, plant-based protein and lots of vegetables. Bruce, a lifelong skinny guy, had the appetite of a teenager and was big on “starch.” I tend to back off from that stuff. That is, until now.

Tell them about your new game.

Thanks for the reminder, 9. After failing to add 500 calories a day to what I normally eat with the goal of gaining a pound a week, I turned the problem over to my imagination. Thus, The Food Proxy Game was hatched.

It works like this: Ask a good and trusted friend who has expressed frustration with weight loss for a list of foods they love but actively try to avoid. To support the local economy I added a second parameter: the food must be made fresh, in Walla Walla. The game: I add something from the list to my usual diet, take a picture of it right before I eat it, and email the picture with a report to my participating friend.

It sounds complicated. But then, that’s the way we are.

Sounds yummy to me! How have you done so far? 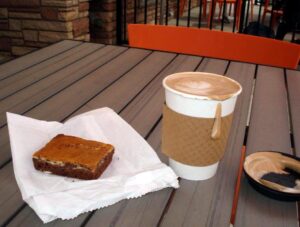 I’ll explain when we’re done writing. I proceeded to Walla Walla Bread Company for a takeout order of Creamy Mac and Cheese, with mushrooms: 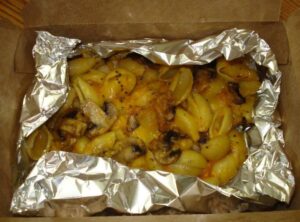 That was dinner. For extra credit, I also purchased a batard there and picked up some pepper beef bacon at Butcher, Butcher, for BLTs the next day. We’ve got tons of homegrown tomatoes right now.

Batard sounds like something Mom would tell me not to say. 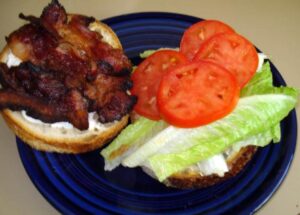 Possibly, 9, but she’d love it when she found out it’s a thick loaf of French bread. I was a bit food exhausted after the weekend, but persisted with the game on Monday. Since I had a downtown errand I stopped in at Bright’s for Birthday Cake ice cream on a waffle cone: 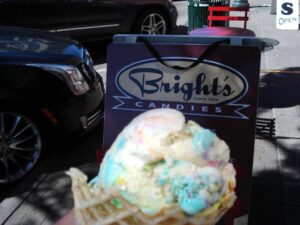 That ice cream cone looks as big as the front end of a car!

It felt like it, too, Lily. Good thing I had you and 9 to help me eat it. We roamed Main Street in downtown Walla Walla, looking through the windows of wine tasting rooms and ignoring the scowls of passersby because you can’t eat ice cream while wearing a mask.

We stayed six feet away, though.

True, 9. Maybe it had more to do with seeing an adult woman eat ice cream at 11 AM?

People can be very judgmental.

Also true, Lily. The friend I recruited for The Food Proxy Game is enjoying my email reports. Hopefully I’ll stay on track with the daily calorie additions long enough to get back to where I should be, weight-wise. It should be easy to level off my intake by the time I get there. All I have to do is stop eating off the list.

I’m not sure about that, 9. Since I was your age I’ve gotten really good, maybe too good, at caloric restraint.

Whatever your challenges are with food and/or life in general, I hope you’ll consider the real takeaway of The Food Proxy Game: When you’re struggling to accomplish something you really need to do, ask a friend for help. It will keep you accountable and might even inject some fun into the process.

Friends and fun. Not a bad mantra for these pandemic times.