Food Attitude and the People Inside

Lately I’ve been shoveling down my meals, aware of the nutritional components within but giving no attention to taste, texture, temperature, etc. Unless I’m eating something indisputably awful (which occasionally happens given my “what in the refrigerator needs to be used today” style of meal planning). What’s up with my food attitude?

I say “lately” but I think this indifference has been going on for some time. Oh, I have my little pockets of comestible bliss- -savoring a Nu-Go dark chocolate pretzel bar at a rest stop midway through a cross-state drive, for instance.

Under the right circumstances, a moment of food attitude bliss can be had with a Nu-Go bar!

That’s a fairly apt description, Lily. About three years ago, not long after Bruce died, I realized I wasn’t eating enough. This had been going on for about a month, from the time we received his prognosis, and to and beyond the 24/7 week of home hospice. Too much to stay on top of- -meds, turning him in the bed, watching for signs of the inevitable. For me, little food and minuscule amounts of  sleep.

To analyze the depth of what I’d come to recognize as a problem, I started tracking my daily caloric intake on an Excel spreadsheet. Good thing I did- -some days I was eating less than 1,400 calories. Sometimes I was completely baffled by the question What do you like to eat?

A good choice, 9, and one that involves almost no prep or clean up. Which was another thing. Bruce had done most of the cooking, especially dinners. Why? Partly because he liked to cook, but partly because when I cooked he never thought there was enough in the meal. I’m not big on starches; he definitely was. Plus, I’m the sort of person who can work through regular mealtimes and miss them without noticing or caring. He was not. He did the cooking and I did the cleanup, a fair trade. After he’d gone, I quickly discovered just how out of practice my cooking had become.

I’m a fan of systems. Decades ago- -at age eleven and 20+% over a healthy body weight for my age, height and frame size- -I joined Weight Watchers. How I got there is a story in itself, ignited when my best friend in seventh grade hurt my feelings one time too many. In fact, I’ve written an unpublished middle-grade novel in which that whole experience is a pivotal event.

The same one you have now, 9. You know how she is- -she wasn’t trying to be mean, she was trying to push me to do something that she thought would, ultimately, be good for me.

And it was. Not only did I lose the unhealthy 25 pounds; after eight months of consistent, gradual effort I had retrained my eating habits. These have pretty much stayed with me, freshman year of college excepted (ah, the lure of an all-you-can-eat ice cream sundae bar in the dining hall!). The Weight Watchers system has changed to “points” since those days but when I learned it, it was based on food “exchanges,” dietary guidelines for diabetics, more or less. I’m habitually aware of how many fruits, how many vegetables, how many portions of dairy, grains, starches, proteins and fats I consume each day.

This time around, I used the guidelines to get back into the swing of eating enough. None of it had to involve fancy preparation or intense cleanup, and I developed a few go-to recipes “for one” as I progressed.

Honestly, though, cooking, and eating, can bore me to tears.

One thing that sometimes makes a difference: eating with other people. There’s enough going on to engage all my senses. Choosing something off a menu or appreciating what someone else has made in their own kitchen. Observing the joy (or distress!) they experience as they eat. Conversation. 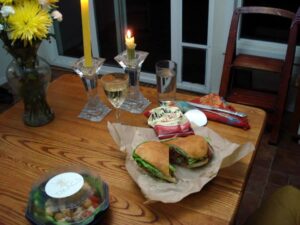 Another option: Takeout to tempt a more positive food attitude. . .

These experiences are harder to come by, given COVID. With each uptick in infection or the onslaught of a new variant we withdraw (in my opinion wisely so). Should I cultivate a special friend to break bread with on a regular basis? Not worth it! I’m a private person who enjoys a lot of solitude, disinclined to take on a housemate or a beau just to have someone to eat with.

Ahem. You’ve got us.

Yes, Lily, but- -wait, let me think about that. If the two of you want to take on the cooking and cleaning every so often- –

Do we get to pick what we’re making?

Possibly, 9. What are you thinking?

The one made from 3 ingredients- -tuna, canned mushroom soup and crushed potato chips?

I was afraid of that. Lily?

Better, and in my kitchen leftovers are always a plus.

Food. For many of us it presents a challenge beyond basic nutrition. In 2009 author Michael Pollan wrote the bestseller Food Rules. The heart of the book is seven simple words: Real food, not too much, mostly plants. The focus is to steer us away from heavily processed “food-like items” of dubious nutritional value. I’m pretty sure Pollan would faint if presented with a serving of Grandma Gretchen’s tuna casserole.

At the other end of the continuum there’s my massage therapist. Overall, she’s an advocate for healthy food choices, but last summer when she was working over my seasonally thinner than usual self she said (I paraphrase) “Go home and eat a piece of cake! I don’t think healthy eating is healthy for you.”

In the end, like so many things, it comes down to balance. My new-ish goal, set last fall, is to gain a few pounds. It’s a difficult goal to attain. A censor beeps in my brain when I approach 2,000 calories a day, even when I set the gain-focused minimum at 2,500. For me, efforts to accept an additional 500 calories a day is rife with discord. Just like losing weight, gaining weight is primarily a mental game.

With persistence, I’ve climbed up a couple of pounds since September and have recently altered my exercise regimen to build more muscle. All of this is important to overall health as I (gasp!) age.

*”What goes on four feet in the morning, two feet at noon, and three feet in the evening?”

Answer: a person (a baby in the morning of their life crawls on four feet (hands and knees), etc.)