Gnomes and Gnocchi with the People Inside

How often do two nouns that start with the letters “gn” crop up in one’s life in the same week? I have had such a week, the first in nearly sixty-two years. I have come to possess both a garden gnome and a package of gnocchi.

We have gnats, too.

Thank you for the inventory, 9 and Lily. We mentioned the garden gnome last week, when it was no more than an idea and the object of a future treasure hunt. The treasure hunt was a bust (gnomes seem to be out of season in Walla Walla) but I managed to find a relatively subtle one that doesn’t look like someone barfed a box of Christmas decorations all over it, online: 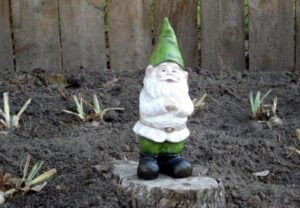 He arrived on Tuesday. I unpacked him immediately and placed him on the lilac stump. It’s a funny thing, I have no expectations of what the garden gnome is supposed to do, other than to simply be. Maybe that’s the lesson. He’s been a good sport about staying put, and is a model citizen. No reports of vandalism at the one-foot level around the neighborhood. So far, that is. I’ve named him Phinnaeus.

Considering the two words together, gnome’s pronunciation employs the simple elegance of a silent “g” but gnocchi? I didn’t learn how to properly pronounce it until late last year. A kind in-law who is a classically trained soprano and sings in many languages explained to me that the consonant combination “gn” in Italian is like the letter “n” in Spanish when it has a tilde (aka “the squiggly mark”) over it. It’s called a “palatal nasal” in linguistic terminology.

What is gnocchi, anyway?

It’s a sort of Italian dumpling, 9, made from semolina or potatoes or other starchy things. We’ve had it for dinner twice this week, the stuff out of the package that bobs up to the surface of a pot of boiling water after two minutes?

Oh, that stuff! I like it okay, but I’d like it better smothered in grated cheddar cheese instead of mixed in with tofu and vegetables.

To each her own, 9. There’s one more serving to go, three to the package. I didn’t notice in the grocery store that once the bag is open you’re supposed to use it up in five days. We’re facing rest of it- -I mean, eating the rest of it- -tonight. 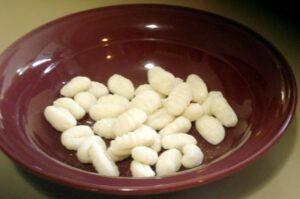 Gnocchi, uncooked. Am I the only one who thinks it looks like maggots?

How about a compromise? Let’s serve it with thinly sliced fresh mushrooms in a really yummy tomato sauce. We can do vegan Italian sausage and grated Romano for protein.

Okay, I guess. But I still think cheddar would taste best.

We’ll cross that bridge this evening, ladies. Today, starting at 8 AM, we’re at the Women Writing the West online writers’ conference. We’ll be tied up with that until at least 2:45 PM, and all day Saturday.

Except for tap class at 11! I can hardly wait.

Same here, Lily. I’ve put the shoes on a couple of times in this century but it’s been 20 years since I’ve danced in a classroom setting. You two wouldn’t know this, but Mom was tapping when she was my age. She was 90 when she stopped, not because she wanted to but because her teacher retired. 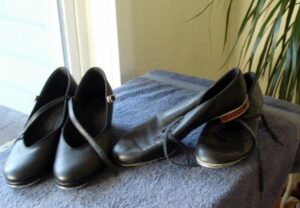 Neither gnomes or gnocchi: tap shoes, both heels and flats!

What’s the lesson here? That it’s never too late to realize you need something you’ve never needed before (like a garden gnome); That no matter your age you can still launch a linguistic and culinary adventure (gnocchi); That old loves have a way of coming back (tap class). These insights are timely, as this week a dear friend of mine nears the end of her life. While thinking about her and sending love to her and her family, I also need to remember that the future bobs like perfectly cooked gnocchi on the horizon.

All I have to do is reach for it.