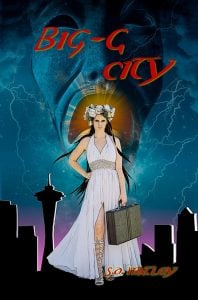 Hi, I’m Candy Smith. If you’ve read Small-g City by S. D. Matley we’ve already met, at least, as far as what she decided to tell you about me. S. D. (I call her Susan) is super-busy this week. So am I (more about that later), but she twisted my well-toned arm to write this week’s blog. The box of Dilettante truffles she bribed me with didn’t hurt one bit.

Like many of you, I’m a working wife and mother. At the end of Small-g City, I was making the transition from Rain Goddess to spokesperson for Hera’s hugely successful new program, Marriage and the Media. Bet you didn’t know that, as the Goddess of Marriage, she’s responsible for mortal marriages world-wide? The program is based on a wild theory: if marital fidelity gets as much airtime as romantic scandals, the divorce rates among mortals will plummet. Turns out, Hera was right! I’ve been pushing the program for four or five years. Maybe we’ve met at one of my “Marvelous Marriage” seminars, or at a book signing event? You must have seen me in television commercials and on talk shows (35-ish, long blonde hair, always wears red). Oh, but I wasn’t supposed to tell you I’m an immortal, not one of you. My bad! Hopefully Susan “S. D.” Matley will edit this before she posts it. . .

My career’s been darn successful. I hate to tell you, though, that life isn’t absolutely perfect right now. It’s the packed schedule and the travel that goes with. I’m gone for weeks without touching home (we live in Seattle) and I’m missing lots of great moments with my son, Titus, who is the equivalent of a mortal two-year-old. Thank Zeus, my husband Jim can work mostly at home. I miss lots of great moments with Jim, too. Well, anyway, I miss him.

Honestly, my home life sucks (but don’t tell the tabloids, they’d be all over it). If Jim would only get with it and start using the digital devices he’s been ignoring for about a decade, he could do most of his work on the road and he and Titus could travel with me. He won’t do it though, just drags his size-eighteen heels and endangers the world’s forests he goes through so much paper. It’s kind of a passive-aggressive thing, which is weird because he’s a counselor with a PhD in psychology.

Anyway, there’s a bright spot on the horizon, I hope. Jim, the frickin’ idiot, wouldn’t come to the City of Mount Olympus with me for three weeks of business meetings and maybe a little vacation, even when I begged. But Hera ordered him to come, just like that, not only because she’s one of the most powerful Big-G Goddesses but because she’s also Jim’s aunt. Hera’s super-big on having us seen as a family because people are starting to talk about the condition of my marriage, which is bad for business. So there you go. Jim’s bringing Titus, too. They, of course, will have to travel on a mortal airline because Titus is too young to fly on his own. All the way from Sea-Tac to Athens International Airport with a toddler, can you even picture that, especially with a toddler who’s teething? The mortals keep such close track of me these days (you’re one of them, so you probably know that already) that I have to go on a frickin’ frackin’ plane, too. I’ll fly out of New York after a crazy week of seminars, book signings and some celebrity event thing Hera says will be good exposure for Marriage and the Media.

Honestly, I’m getting a little tired. Do you have any idea how much work it takes to look 35-ish when you’re four thousand years old, even when you’re not being run ragged? I do so much running around that for the first time in my life I don’t have to watch my weight, in spite of the box of Dilettante truffles Hera makes sure are left on my nightstand, no matter what city or hotel I’m staying in. Next stop, the City of Mount Olympus, aka Big-G City. Hey, that reminds me, if you want to see how things turn out for me and Jim and find out which Big-G Goddess is trying to sabotage Marriage and the Media, get a copy of (Susan) S. D. Matley’s new book, Big-G City! You can find it here:

BTW, it’s not me on the cover, that’s Zeus and Hera’s daughter, Veronica Zeta. She’s just taken over as CEO of Olympus, Inc., and she’s up to her frickin’ eyeballs reorganizing the place. Not sure who the giant, scary-looking dude is behind her. Guess I’ll have to read the book to find out?