Guilt and the Person Inside 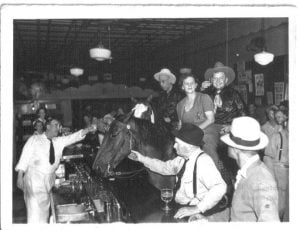 Great-Uncle Tizzy Johnson in the white hat, showing the world how to have a great time in Great Falls, MT. Not a trace of guilt about riding his horse into a bar. . .

Tomorrow it will be eleven months since Bruce died. That’s both a long time and a short time, if you know what I mean. There are so many things I miss about him, and one of the biggest things is not having him here to tell him about the fun new things I’m doing. At the same time, I realize I wouldn’t be doing most of these things if he were still here. We were a very contained couple, real stay-at-homes who enjoyed each other’s company. It’s a whole different life now, and I’ll admit I really enjoy a lot of new activities I’ve taken on. But there’s an edge inside of me that I think most people who’ve lost a spouse have inside of them, too. Sometimes I feel guilty about enjoying life on my own.

There, I said it. I am having fun, even during this very challenging time of reliving the daily horrible events and revelations of this time last year. Not every second of every day is terrible, of course, but staying on top of it takes work. I listen to a self-hypnosis relaxation tape to ease the anxious places in my muscles and my gut. I’ve been walking every day in addition to my regular six days a week workout. Exerting extra caution, if I have a drink in the evening I have only one. I’m tough on observing a reasonable bedtime instead of staying up into the wee hours, reading.

Tell them about the fun parts.

That’s Lily, my inner fourteen-year-old. She’s a pro at identifying the bright spots in any given week. Last Saturday, for example. We had a fitting for a dress we’re modeling at the Kirkman House Museum Christmas Victorian Tea on December 8. The theme is Vintage Party Dresses and Evening Gowns. Mine is an evening gown, a full-length beaded dress, c. 1930, with drop waist, dolman sleeves and a low, draped back. It’s gorgeous, and because of the bead work it weighs a ton. Lily admired it greatly when we had a chance to look in the mirror. 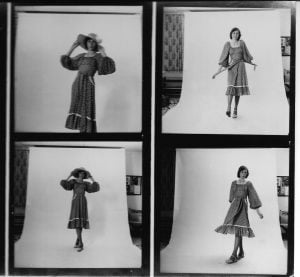 What does this young woman have to feel guilty about? Nothing, as it happens. John Robert Powers School, 1975.

The things that had worried me about this volunteer modeling gig are all being handled by the event organizer. She’s loaning me an appropriate shoes and has volunteers available to do makeup on the day of the event in order to get the right look for the period. Super-bonus: the models are being sent to a hair salon to have era-appropriate “dos” that morning, too! There will certainly be photos. I promise to share one if I don’t come out all nose.

I showed up for my appointment at the Clinique counter at Macy’s, Monday, 10 AM sharp. A sweet young woman named Lucy put me through the skin care regime, then proceeded to new makeup. You may recall I pitched everything but lipstick a while back, once I saw that my foundation powder had turned orange and I realized I’d purchased most of the stuff I had in 2006. Combine that with my sparse knowledge of makeup (acquired when I was packed off to the John Robert Powers School of Finishing and Modeling in 1975) and you can see how even I, the world’s biggest tightwad, was brought to my knees.

It was hard to look at my no longer sixteen-year-old face as Lucy applied powder, liquid foundation, bronzer, blush and everything that falls under eye makeup. The eyebrows she feathered in were reminiscent of Joan Crawford, or a seagull on the down stroke in the sky of a seascape. The two-tone eye shadow scheme was also not my favorite- -the concept was okay, but the outer and upper color was a shade of brown too dark for me. My eyes looked like they were at the bottom of a well; overall, I looked like I’d come out second in a fist fight.

“Kind of dark for you. You might just want to use a bronzer, instead,” Lucy said without knowing my own opinion. I appreciated her candor, also the fact that using bronzer instead of eye shadow meant one less item to purchase.

I’ll help you with the eye thing.

Thanks, Lily. And I’m glad you enjoyed these outings because Thursday’s activity probably bored you. Cousin Carla and I took a tour of L’Ecole 41 Winery, a few miles west of Walla Walla in the tiny town of Lowden. I acquired a certificate for a tour and tasting there last year, intending for Bruce and I to go, but. . . .The certificate expires at the end of this month, so it was now or never. We enjoyed ourselves immensely, learning about the renovated historic school building the winery calls home (hence E’cole), their winemaking process and achievements. And, of course, sampling the lovely wine. I brought home two bottles, a white blend called Luminesce and the red blend Apogee (a name that is truth, not boast!).

Fun, yes, but the guilt edges in. Others in my position have told me this is normal, that it’s part of the transition to feel that enjoying the new things in your life is somehow disloyal to your late spouse. All very sensible and logical, but difficult to combat.

Yes, thanks, Lily. I know (as everyone I’ve talked to about this has told me) that Bruce would want me to be having fun and trying new things, not sitting around feeling sad all the time. And though he’s not here in body I do tell him about the fun stuff when I first get home. It’s not the same as him being here in living human form, but since I tell him when I miss him, and when I feel sad, and when I need help, I figure I owe him the good stuff to balance against it.

It’s not the same at all. But, since I can’t have him, I’ll keep sampling what sounds good from the rest of it.