Holiday Blues and the People Inside 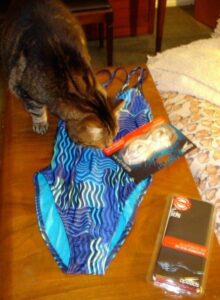 How better to fight the holiday blues than with a new blue swimsuit? Hoosegow advises me to unpack the new goggles. . .

Ugh, there’s a three-day weekend on the horizon! I know many people look forward to these mini holidays, cherish the darn things, even. Not me. For me, a three day weekend spells the holiday blues.

Three day weekends are the most likely time for people to retreat into their social pods. My social pod is Lily, 9 and two adult male cats.

Hey, what’s wrong with that?

Nothing wrong with you two, or the cats, either, but on three day weekends we get left in the dust by the rest of the world and it gives me the holiday blues. All the outer humans vanish from my life, with their families and spouses and church groups and you name it, off doing traditional things and group things, which are two of my least favorite ways to go.

Lily, 9, this Memorial Day weekend we are being proactive, grabbing the holiday blues by the throat and giving it a good hard shake to make it quit. We. Have. Plans.

I’m opting for an exploration and volunteering combo. The exploration part of the package comes first, starting on Thursday, May 27, opening day of the College Place Farmer’s Market. And Veterans’ Memorial Pool, run by the park & rec, opens May 28th. We already have our season pass.

And a nearly cute new bathing suit, cap and goggles.

No bra, 9, though the one we ordered from Victoria’s Secret several weeks ago is in transit and will have arrived by then. I don’t think the promised increase of one and a half cup sizes would help our velocity.

I haven’t filled in May 29 yet, but on the 30th we’re volunteering at the Onion Man Triathlon.

Because some friends of ours are competing in it, Lily. This way, I can support them and the greater Walla Walla community at the same time. Plus, our help is needed. For me, feeling superannuated is the toughest aspect of the holiday blues. Volunteering is an excellent way to overcome that feeling.

We won’t have to run or anything, will we?

Nope. No running, no swimming in Bennington Lake and no bicycling, 9.

Good thing, because we don’t know how to ride a bike.

That is almost 100% correct, Lily. You and 9 haven’t learned yet, but I spent a few shaky months during the summer of 2011 learning to keep a bike upright and more or less moving in a straight line. 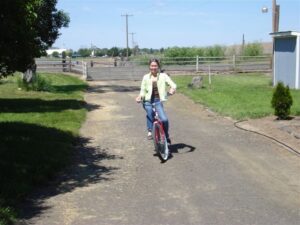 When you were fifty-one? Isn’t that kind of old to start something like that?

Funny, I don’t remember you riding a bike any time since I showed up.

That’s because my bike has been in the garage ever since. I’m pretty much a chicken to take it out and try it again, though sometimes I think of attempting a ride around the church parking lot across the street. But the tires probably need air if not actual replacing. I know zero about bike maintenance. 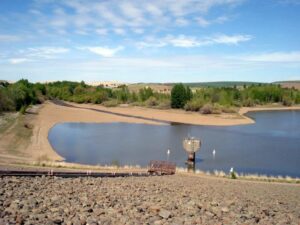 So, yeah, we’re volunteering at the triathlon. They need our help, just like we need people in the audience when we do our Matilda thing or a book signing or play music. It’s our turn to be behind the scenes.

To escape the holiday blues, that’s a price I’m happy to pay.