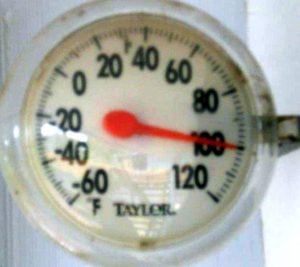 August in the Pacific Northwest, the time of year when temperatures shoot higher than any other. Here in beautiful Walla Walla, WA, we are experiencing another series of triple-digit days. Hot and hotter, even in the shade.

Thank goodness for the modern technological marvel of air conditioning. Our friends on the western side of the state who typically don’t have central a/c are certainly paying for it this year. Not so much right now, with the lowest “high” in Seattle’s 10-day forecast set at a brisk 71, and rain expected over the weekend. Rain, for crying out loud! There’s plenty of howling, though, when the western Washington highs sneak into the 80s and 90s. “It’s worse here because we have more humidity,” they say to justify their anguish. “Over there,” – -meaning southeastern Washington, where I live- – “it’s dry heat.” Having lived on both sides of the state I’ll agree that dry heat is often more comfortable than its humid counterpart, but I also appreciate the wise words of a friend who spent his growing up summers working wheat harvest in Walla Walla County:

“Dry heat. Like an oven.” Thank you, Steve Owsley, who now lives on the humid west side.

Wet heat or dry heat, too much of it can really slow you down. It’s wise to get anything concerning the great outdoors taken care of before 10 AM. People of my pigmentation are warned to slather up with SPF 30 before setting foot outside. “Make attempts to avoid the sun between 10 AM and 4 PM” states the Weather Underground website. Maybe I can get part-time pay as a vampire?

One consequence of this very hot summer- -I can’t grow beans for beans. I suspect bouts of extreme heat, jubilant when it shrivels innocent bush bean blossoms. It’s so hot the bees are bummed. One single, solitary bee is working four luxuriant hills of squash. Luxuriant in foliage and blossoms, that is. Am I the only person on earth who has only three small zucchinis in progress, only one infant spaghetti squash?

Maybe it’s the garden beds themselves. We moved to our new place late this spring and I planted whatever I could, as quickly as I could. Soil analysis is definitely in my future, followed hard on the heels by soil amendment. You may be surprised to learn that amending garden soil is one of my great joys in life. All I can say is, I’m like that. Another thing I will say is our new garden has proven an excellent habitat for weeds.

You know it’s hot when even the cats won’t stay outside. There’s nothing our eldest, Grizelda, likes better that flopping down on the patio with the intent of transforming herself into a desiccated cat corpse, as found in the pyramids of Egypt. These days, she doesn’t protest (much- -she is a cat, after all) when I heft her inside when the mercury hits 100. Yesterday, when triple digits set in before 2 PM, we had a mandatory cat evacuation from outdoors to in. Thank goodness we have a guest room in the new place so there are sufficient, private beds for all.

Hot and hotter. On Saturday, the high is predicted to drop to an arctic eighty-eight degrees. On Monday it’s back in the mid to upper 90s, for the entire week. We are so lucky to be living outside of major wildfires but the smoke from neighboring conflagrations has thickened the air for weeks. Mark Twain is reported to have said, “The coldest winter I ever saw was the summer I spent in San Francisco.” This quote has never been successfully attributed to Twain for real, but, whoever said it, what would they think of summer, 2018, in southeastern Washington? Or summer in fire-plagued California?

Friends, cooler times are coming. No, really! So please keep yourself from being slowly mummified by the summer sun and heat. WEAR that sunscreen. DRINK that water. Stay INDOORS during peak sun and heat hours.

When, oh when, will the rain start to fall? Honestly, I can’t wait. It’ll be one more prime topic to rant about.