How Much Hair Can One Pull? 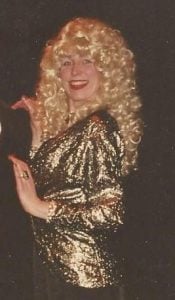 Wigged out after a good hair pull in1994.

I’ve never been blessed with good hair. Given the present state of affairs, I wonder if I’ll have any hair left by month’s end.

Grrrrr! Yes, it’s been a frustrating week. Don’t get me started about health insurance or the (hopefully still just a proposal) Senate GOP tax overhaul. Do not, I repeat, do not, bring up the subject of sexual assault in the workplace, or, for that matter, in any place. I have had my fill of these agonizing topics. Why, oh why, can’t people just behave decently? Why can’t politicians do the job they were elected to do instead of making reelection their number one priority?

Okay, I will not bring this stuff up, either. Why? Because I still have some hair left. Also, some good things have happened this week. No, really, they have. If I could just remember what they were. It certainly wasn’t anything I heard or read on the news so it must be closer to home.

Ah, yes, here’s a happy morsel to share. I received another “positive” rejection from an agent regarding my middle grade historical fiction novel. She was kind enough to say that she enjoyed the writing sample. She also said she had another project on her list that covers a very similar subject matter (this was her reason for passing on my story). A sane person would feel deflated by this intelligence, but not a writer. You know why? Because if the agent has a very similar project on her list that means somewhere, somehow, someone will actually represent middle grade historical fiction!

Another writing achievement: by the end of today (Friday, December 1, 2017): I will have completed the onerous task of revising an entire 65,000 word novel from third person point of view to first person point of view. It’s an exhausting process but the manuscript is really pepping up as a result.

What else? Our youngest male cat (yes, he’s fixed, like all of them) has dialed back the amount of indoor spraying. Fingers crossed that this is a trend, not an aberration.

Speaking of cat pee, I know I said don’t mention the GOP tax reform proposal, but I would like to share this: I did my patriotic duty and called the offices of all the GOP senators who were undecided on their support of this legislation. Well, everybody except Bob Corker, whose line was perpetually busy. Note to self: if you want to be popular, announce that you are not running for reelection.  I talked to staff or left messages about my opinion of the proposal, also the specific concerns that were holding each senator back from making a decision. I also called my own Washington State senators to thank them for their persistent attempts to keep Congress from throwing the American People under the metaphorical bus.

Will my calls make a difference? Maybe, maybe not. I’m a firm believer in giving feedback. How will Congress know what we, the people, support and what we don’t if we don’t call or write them? Well? Our communications may help them focus their thoughts on responsible legislation rather than reelection. If we all speak up, they will have to listen.

My goal for the rest of 2017 is to stop pulling out my hair and keep the faith. Not everybody is a cold-hearted greed machine. Not every project is stuck in the mud. And if I fail? One word: wigs.