In Print with the People Inside 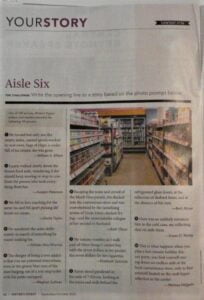 Hey, everybody, I’m in print!

What do you mean?

Yeah. You look just the same as always.

It’s not about how I look, 9, it’s that something I’ve written in now in the pages of a national magazine!

Amazing. Have you hit the Big Time?

Well, uhm, no, Lily, but you know how it is in the arts: every little victory deserves celebration.

When the September/October issue of Writer’s Digest arrived in my mailbox yesterday there were two copies. At first I thought this was a mistake, but once I put on my reading glasses and checked the addresses they both proved to be mine. Oh. Right. Not to mention Aha! I received two issues this month because I am both a subscriber and a contributor! 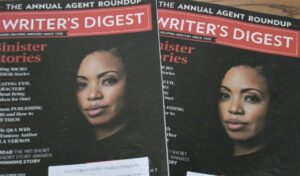 Two copies of the same issue? Oh, right, because this month I’m in print!

You’ll find my work on page 62 in the “Your Story” feature. I responded to a “first line” challenge several months back, to a picture prompt and a request for writers to submit the first line of a story that the picture suggests. My entry made the top twelve selected by a judge for the online voting process. As a prize, the entries that surfaced as the top ten would appear in a future issue.

I am happy to report that I have emerged as number nine on that list! As you can see from the image at the top of this post the photo prompt is an aisle in a convenience store. If you can’t enlarge the image enough to read number nine, here it is:

“Ours was an unlikely romance; him in the cold case, me collecting dust on aisle three.”

I do! It’s like one of those old Merrie Melodies cartoons set in a grocery store, where all the food comes to life at night.

Exactly, Lily, and I’m glad that you, at fourteen, have already cultivated a warped sense of humor. It will serve you well in life.

Speaking of which, when I first announced making the top twelve several months back, I promised to share the 100-word short story (word count excluding title) that begins with this sentence. It’s called “Endless Love”:

Ours was an unlikely romance, him in the cold case, me collecting dust on aisle three.

Introduced in a plastic carry basket, we jostle each other in the canvas shopping bag suspended from a bicycle’s handlebars, bound for our place of rendezvous.

We part briefly in the kitchen, he exiled to the microwave, I unscrewed with the aid of a rubber grip. I am shamelessly heated atop him for thirty seconds on High.

Hot, ready, we are transported by fork to a moist, dark cavern, together sliding bite by bite, to and through and beyond the end of the end.

Love, passion, death- -pretty much covers it all. Plus, it’s weird.

Couldn’t you have made it dessert instead of a main dish?

Critics, everywhere you look (especially on the inside!).

I really enjoyed the challenge of the first line contest, and following up with a story of exactly 100 words. It was just the break I needed from sweating and fretting over my current work in progress, a 72,000 word contemporary women’s fiction novel with elements of romantic suspense. Plus it was an opportunity to be silly. That stuff doesn’t grow on trees, especially Monday through Friday!

Put yourself out there and try something new! Dare to fail, but also Dare To Succeed. Because you just never know when you might, literally or metaphorically, get something in print.