Indulging with the Person Inside

Now that Lily, my inner fourteen-year-old, has arrived she’s become adept in making her wants known.

You’ve been doing way too much grown-up stuff this week. I mean, I know you had to and everything, but you need to start indulging yourself a little before you get boring.

Got it loud and clear, Lily! Let’s start with the first part of your insight.

Yes, it has been a week or two with a lot of grown-up stuff crammed into it. Last week I visited Social Security to apply for my widow’s benefit. On Sunday, I went to Prescott, WA, for the first time in a year (when Bruce was with me), to attend a party given by some wonderful friends for their cousins.

Cool that they made you an honorary cousin.

I totally agree, Lily, and I had a lot of happy moments, but it was mixed. From their family farm I could see Bruce’s and my former home, a sweet place on two acres, the house started in 1895. We sold it in July 2018 and it’s just been sold again. I’ll admit I was worried about seeing the old place. It was a wonderful house to live in- -high ceilings and lots of light- -with an acre of lawn and many trees, some of which we’d planted during our 11 years there. 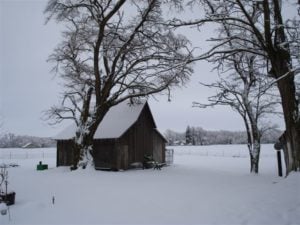 Indulging in a snowy winter: our old barn in Prescott, WA, 2008.

I’m happy to say the place looked great! Lush green lawn, better than we’d managed to keep it, and all the trees we’d planted are still standing. The new owners were in the process of moving in and there was a palpable happy vibe. At my friends’ farm, I sat on a bench on an otherwise unoccupied patio, indulging myself by looking north at my old home. Leafy trees shaded the barn, the house itself barely visible for all the foliage on the ancient locust trees. Peaceful. I recalled the spectacular view of the Blue Mountains from the kitchen window. Garden and fruit tree harvests come and gone. Chickens who tragically met their demise in the jaws of the neighbors’ dogs.

My heart ached when I thought of Bruce, and I wasn’t the only one experiencing spikes of happy and sad feeling at the gathering. My hosts had lost their dad, Gene, just two months before Bruce died. Bruce and Gene, though a generation apart, were close friends- -partners in gate hanging, weed control, post-hole drilling, and the like. Though heartbroken for his own loss, Bruce honored Gene’s passing by singing at his graveside service in late October. No one imagined that Bruce would be next.

And don’t forget, you ate half of a huge ham and Swiss sandwich.

I certainly did. And on Tuesday, while out on errands, Lily shanghaied me and bought a cream cheese brownie at Colville Street Patisserie. We ate a quarter of it immediately. It was delicious, but much sweeter than what we bake at home. It took us two more days to finish it, with milk to cut the sweetness. Definitely an indulgence.

And we tried something different, for once. About time!

Wednesday brought another grown-up task: meeting with an investment advisor. Though I write every day and actively market my work, in the financial sense Bruce and I were retired. I spent some time Tuesday listing assets and figuring out expenses for a one-person household. Not that different than two, considering most is spent on property taxes, utilities and my five four-legged kids. The investment advisor listened, asked questions, and gave me ideas about how I might move investments around to better meet my financial needs while remaining sensitive to my acceptable level of risk. We meet again next week to go over her written proposals. It’s good to set up for the next phase of my life, but hard, too, as it’s one more acknowledgement that Bruce has died.

Speaking of which, the little switch inside me finally flipped to the “on” position for planning the first of three anticipated gatherings in his honor. I’ve booked a venue and a caterer for a gathering in Port Townsend, October 5th (Port Townsend friends and all family, please email, call or send me a message through Facebook for details). For months I’ve been thinking the Walla Walla gathering would be first, since I’m here. Later! I plan to get together with Bruce’s cousins in his home town, Reno, Nevada, too. Bruce, from his current long-distance location, is sure to enjoy these gatherings, as long as I stick to his request: “Don’t get me mixed up in anything religious.” Pure Bruce!

Not sure if you noticed, but you’ve gotten all grown-up again?

Never fear, Lily! This weekend we’re going to Walla Walla Fair and Frontier Days. I haven’t been to the fair since the last time Bruce and I performed there in 2012. This year, I have lots of wonderful reasons to go. Two guys we used to perform with, Marty Davis and Brady Goss, have two shows daily. Marty is, among other things, an excellent cowboy balladeer. Brady is a piano man, heavily inspired by the music of Jerry Lee Lewis. On top of being incredibly talented and entertaining performers, they are also very nice guys. Friends will be working in the Kirkman House Museum booth and Cousin Carla’s great-niece has some work in the art exhibit. Lily can relive her horse 4-H days, touring the barns. 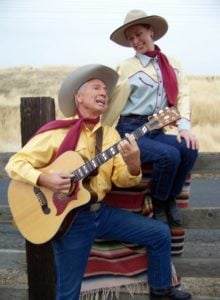 And don’t forget, we’re having lunch there.

I’m not sure if I’ll be indulging myself or inflicting self-harm if I opt for a corn dog, but at the end of the day, you’re only fourteen twice. If you’re lucky, that is.