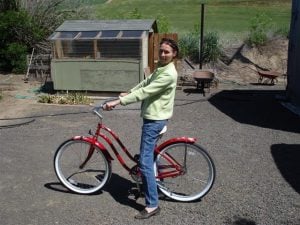 One more way to slow the march of climate change!

Have you noticed how sometimes a lot of information on a certain topic comes your way? This week, I’ve been inundated with information about climate change.

Part of this is my own fault. I’m working on a new book in the Small-g City series, set in 2025. One of the things our Olympian friends are trying to do is end world hunger and I’ve been swamped with research reading. I’ve read books on humanitarian aid; climate change and the retreat of arable land is also a part of what talking heads call “food insecurity.” Enter Six Degrees: Our Future on a Hotter Planet by British journalist Mark Lynas. It’s a comprehensive and thoughtfully laid out discussion of what will happen to planet Earth and those of us on it (plants and animals included) as global temperatures climb in the 21st century. Though published in 2008, the book is still considered a good source for understanding climate change- -if you dare.

Per Lynas, what happens when temperatures rise one degree Celsius is bad enough (stronger droughts and storms, the melting of glaciers and polar ice that leads to rising sea levels, etc.); at a six degree Celsius jump, we’ll be lucky to be alive. These dire forecasts are science-based. No one claims that Earth, itself, isn’t contributing to climate change; it is. The problem is, humans have created so much carbon in the atmosphere through use of fossil fuels that global temperatures are climbing at a vastly accelerated rate. We’re doing in decades what it takes our planet millennia to achieve. Plant and animal life doesn’t have enough time to adapt when their habitats shrink from temperature changes and drought.

This information came to me again yesterday morning, listening to the Diane Rehm show as I toiled away on the Nordic Track. The topic was how big cities, even in the US, are starting to move away from car-based planning. Our young friends, the Millennial Generation, are a big part of the shift away from carbon-intensive modes of transportation. They have the nifty habit of looking for housing near their places of work, and are more likely to use public transportation when it’s available.

By necessity, I wasn’t so virtuous in my young adulthood. Back in the 1980s (when I lived in Seattle), I worked as an auditor for a public accounting firm. Every few weeks I was assigned to a different client somewhere in the greater Seattle area and I needed a damned car. After work, finding a parking space in my densely-populated neighborhood was a contest between patience and frustration. Frustration eventually prevailed- -I received five parking tickets in one month, for pulling my 1976 Dodge Colt onto the wide sidewalk by my apartment building when no parking spaces were available within a several block radius.

Drawing the curtain of charity on that trying time, I consider my present circumstances. My husband and I live in a rural agricultural area, twenty miles from groceries and medical services with zero public transportation out our way. We make every effort to limit our “town” trips to once a week, but sometimes things come up that require a quick trip in and back. Routine veterinary appointments stand out in my mind; I won’t leave a pet in the car while banking, shopping for groceries and getting a haircut. Sometimes it works out that we can book two of our five four-legged friends for the same appointment, but they all joined the household at different times of year and vaccines fall due in different months.

This started me thinking about fossil fuel use in the west in general. Out here, population is not as dense as it is on the east coast. Our big western cities, thank goodness, are investing in light rail systems and other fuel-efficient forms of public transportation. But what about us rural folk?

Here are a few ideas:

*Car pool with a neighbor for grocery runs

*Reduce your use of fossil fuel-based energy in day-to-day living. Mow your lawn with a manual push-mower like grandpa did. Turn off the lights when you leave a room (plenty of fossil fuels are used to generate electricity). Invest in energy-efficient appliances and light bulbs. Dry your laundry on a line.

These are simple things to implement and many of them will save money, too. The biggest obstacle to reducing our individual carbon footprints is probably ourselves. It’s hard for us to believe that making small changes in how we do things will make a difference in solving a large, complicated problem, but if we don’t do what we can, we’re part of the problem.

Even in the fictional world, it’s going to take Olympus, Inc., a long time to unravel the interrelated problems of world hunger and climate change. Many of the immortal-run corporation’s departments will be working together, including weather, agriculture, military and technology. One of the Big-G gods will face a career crisis when he’s fingered as the culprit who introduced mortals to fossil fuels.

Fortunately, I have some time to puzzle this out for book three. In the meantime, you can get better acquainted with the immortals (including everyone from Small-g City) in book two, Big-G City, due for release this month. Watch Facebook and https://www.susandmatley.com/ for details.

Until next time, be well and happy reading.