Innovation and the People Inside 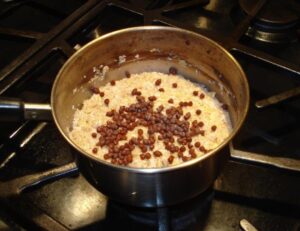 Wow, are we ever in a fast shuffle of changing times! With so much fluidity in our daily lives, would a daring innovation in the world of Lily, 9 and me be noticed?

Most definitely, when the innovation is adding a tablespoon of semi-sweet chocolate morsels to the morning oatmeal.

Clearly, 9. And honestly, it was pretty good. Just a touch of the deep bitterness of cocoa offset with just the right amount of sugar, half-melted and integrated with oats, unsweetened coconut and banana. It added depth, richness, something different than the ordinary. I’ll give it an 8 out of 10.

Ditto. It would have been better if we’d added two tablespoons.

Not sure if I agree with you on that, 9. I appreciated the subtlety of flavor and liked the overall result very much, but would the world in general feel the same? I don’t want to mislead our readers.

How about you, Lily? What innovation have you implemented recently?

No innovation for me, just a pleasant break from the ordinary. I loved doing the fashion show last weekend! 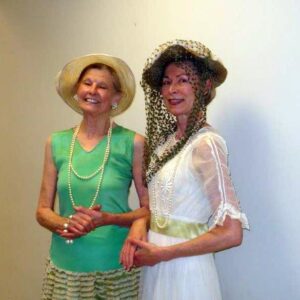 Yes, that was a lot of fun. The event was part of a local group’s centennial celebration and all the dresses were from the 1920s.

Modeling is really just another way of acting. You have to imagine yourself as the person who originally wore the dress. I think she was quite elegant and very wealthy.

Two innovations that wouldn’t hurt us a bit, Lily.

For me, I found something that really helped me curb last week’s blues. It’s an innovation in plain sight, more of a mantra, really: See what’s here, not what’s not.

It’s another way of saying live in the moment, 9, and a reminder to appreciate what we have right now, today. It happened on the way to the fashion show rehearsal last Friday evening. I was driving through downtown Walla Walla and thinking of fun times I used to have there, before restaurants switched to takeout or closed down all together, about how I miss meals out with friends.

I’ve been stuck in that rut for a while, now, but when I looked at what was actually happening in downtown Walla Walla, there were people visiting shops and restaurants, people have fun in outdoor dining areas, enjoying the sunny evening, the fine local wine, some music if they were extra lucky. And there was a bike race going on! A whole pack of racers leaning in to round a corner of Alder Street, legs pumping like fury. The only thing blue was the sky!

It wasn’t my time to stop and enjoy all that, though, given rehearsal. I got to the venue, a church parish hall, a few minutes early and took my time strolling around the beautifully landscaped grounds. The keystone sign in front of the church listed Mass days and times. Though not a church-goer I scanned the list and discovered- -Spanish Mass, 7 PM Saturday and Noon on Sunday. Earlier that day I’d tried to register for Spanish 122 at the community college, only to learn the class (which comes after beginning Spanish) isn’t available until winter quarter. But. . .

Here was something in the world of NOW that could help in the interim. I could listen to Mass, a familiar text ingrained in me from childhood, and hear the flow of the spoken language applied to something familiar. Like checking out the Spanish version of Green Eggs and Ham at the library and reading it out loud (which I’ve also done) but, you know, different.

See what’s here, not what’s not.

A grand innovation (if I do say so myself) and a gentle means to discovering the new world.