Invasion of the Body Snatchers and the People Inside 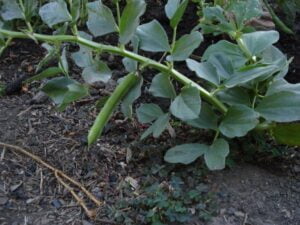 MAYBE these are innocent fava beans, but maybe they’re PODS! “Invasion of the Body Snatchers” is only a breath away. . .

UPDATE: Shortly after drafting this blog Governor Jay Inslee of Washington State announced that all people 60 to 64 years of age will be eligible for the COVID vaccine starting March 31, 2021. For me, this is a huge relief (read on to learn why). For those of you who are still not eligible on March 31, I will not forget you! I will continue to mask and maintain social distance in public places until we ALL get the all-clear.

You read that right. Invasion of the Body Snatchers. Yes, I am referring to the film, both the 1956 version and, for our younger friends, the remake in 1978. These days I am feeling like one of the characters who is still human and has not been taken over by their doppelganger (apologies to fans of the umlaut, I’m not sure how to make Word create one) that grew from a pod.

What are you talking about?

It’s a movie, Lily. (For those new to this blog, Lily is my inner fourteen-year-old.) You’ve probably seen it at someone’s slumber party (hello, Karal, Gillian and Dana! We actually watched The Birds, but I digress. . .). I’m sure I’d seen it by the time I was fourteen, back in 1974. That would be the 1956 version, staring Kevin McCarthy and Dana Wynter. These alien spores from outer space come to Earth. They grow into absolutely huge pods. Inside of the pods, where gigantic fava beans should be, are, instead, clones of actual people. When the actual people fall asleep, the clones take possession of their minds, bodies and souls.

You might like it if you saw it, Lily, it’s more than a cheap horror flick. Symbolically, it has to do with the fear of communism invading the United States, in the 1956 version, anyway, when that was a big deal.

Too bad it was spores and not s’mores.

We can always count on you for a snappy remark, 9 (yup, she’s my inner 9-year-old). You’ll see plenty of s’mores at slumber parties, also half-pound bags of M & Ms (both plain and peanut), giant Hershey bars, Hostess old-fashioned doughnuts and Diet Pepsi to wash it all down.

I would prefer yogurt.

Yeah, right, Lily. You might starve yourself for two days after eating all that stuff, but you’ll eat it. Now, where was I?

Oh, yes, Invasion of the Body Snatchers. Why is this movie on my mind these days? It has to do with, of all things, the COVID vaccine roll out. At this writing, lots of us are vaccinated, either partially or fully, and lots of us aren’t. Right now, I am an “aren’t.” I’ve signed up on the Washington State “find your phase” website and am waiting (waiting, waiting) to be eligible. I strongly believe in the notion that people who are more vulnerable to catching COVID and more likely to become dangerously ill from it should get the vaccine before I do.

But lately, more and more people are gaming the system to cut in line. That’s my interpretation of it, and I know not everyone agrees. I don’t appreciate one bit that the guidelines and the actuality of vaccine distribution do not align. Things happen, the worst of which is people lying when they fill out their information in the findyourphase app (Washington State). Other things are more of a gray area, like is it really ethical to sign up on a “wait” list at a pharmacy when you don’t yet qualify so they can call you up if they have “extra” at the end of the day that will otherwise go bad?

Snatch! From Person to Pod in a twinkling.

After twelve months of being brave (with periodic sessions of primal scream therapy under the comforter) I am now constantly losing it in this atmosphere of lying, gaming and confusion. If there are acceptable alternatives to waiting to qualify compared to what the State guidelines say, why doesn’t the State say so at their website? Is it a life and death issue for someone vulnerable when people cut in line, or is it just a State do-as-I-say ego trip? Without unified guidance for everyday citizens like me, this is turning into a total mess.

My belief in the ethic of waiting my turn is getting me into arguments and has brought me perilously close to losing friendships. I’m having even more difficulty with the way so many people are now disregarding the masking and social distancing protocols in public places. Do the vaccines have an amnesiac effect that makes people forget the pandemic is far from over?

Ironically, now that we are “so close to the end of it,” I feel less safe in public than I have at any other time during the pandemic. It’s chewing me up inside. Therapy starts next week.

Wow, am I ever glad I’m an inner person instead of an outer one.

The way I’m feeling now, 9, I’d like to crawl right in there with you and Lily. The only thing that’s stopping me is, someone needs to feed the cats.

PSA: If you are letting your pandemic protocol vigilance drop, straighten up! Remember Invasion of the Body Snatchers.