Irises, Garden Gnomes and the People Inside

Last weekend I did the craziest imaginable thing. I undertook the devilish hard task of digging up and dividing a bearded iris bed woven as tight as jacquard tweed.

What appeared to be a few bearded irises resided against the south wall of our yard when we took up residence in May, 2018. They were blooming then, pretty to look at from a distance and not at all on our radar as something that needed attention.

This spring, at last taking a closer look, I realized only a few of hundreds of possible blooms were coming in. The bed was so full it was choking itself to death! Masses of rhizomes in the two-by-three foot space looked like a solid sheet of fat, interlaced fingers. I wish I’d taken a picture, it would have been perfect for Halloween!

Thank you, Lily. In preparation for dividing and conquering the patch of bearded iris, I tested the soil for pH, which was in the range bearded irises enjoy, also nitrogen, phosphorus and potassium. These last three rated either depleted or deficient, plus the soil in this part of Walla Walla is heavy with clay.

Additional research revealed I needed to procure blood meal for nitrogen, bone meal for potassium, and green sand (which, fortunately, I had on hand) for phosphate. I also needed a boatload of peat moss and compost. They say you can never have too much compost.

The replanting area was ten feet by ten feet so ordering peat moss and compost by the yard wasn’t the best option. Instead, I horsed an 85-pound bale of peat moss and three 30-pound bags of compost into my shopping cart at Home Depot, ignoring what my massage therapist would say if she knew about this. Amendment materials in hand and garden tools at the ready, victory seemed assured.

Do you ever think of doing something fun on the weekends?

In a word, 9, no. Especially not on Saturdays when I’ve accumulated projects all week and stowed them on a back burner in service of writing, exercise, and, especially, cats.

Saturday morning arrives. I don my UPF 50 shirt and hat and proceed to the south garden bed, spading fork in hand. For the uninitiated, a spading fork resembles a short, square pitchfork. A spading fork is recommended by my Better Homes and Gardens home gardening manual as the preferred tool for dislodging clumps of bearded iris. On impact with the soil, the fork falls off the wooden handle, which has rotted through. I should have known this would happen, as Bruce’s ex-wife left it behind over twenty years ago (they were not on good terms at parting).

I also had a pitchfork, which got the job done. In an hour and a half, for a two-by-three foot bed. I separated the buggers, dozens of them, and snapped a picture to remind me of how bad this had really been: 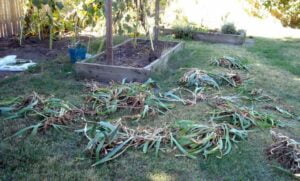 Irises, unchained. All this from a 2 x 3 foot bed!

Next, the rototiller! People who love me discourage me from using this labor-saving device by myself, though I reassure them I re-read the instructions every single time I use it and yes, I’m careful to neither trip over the cord nor cut through it, thank you very much. It’s a baby rototiller, honest!

That part was easy and quick, though the stump of the dead lilac tree I’d had removed last spring vexed me. Why had I declined when the tree service chap asked if I wanted him to remove the stump? Because the thing I want most from a person working on something at my house, besides them showing up when they say they will, is for them to go away. 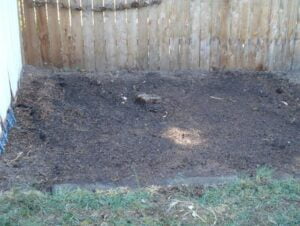 Up center: interloper in the iris patch- -the stump!

I confess I am a might tetchy about home boundaries. Plus I’m chronically worried that the cats will get out, even if someone working in the yard never comes into the house.

Moving right along, I sliced open the bales and bags of peat moss and compost and tilled those in. Next, carefully measured quantities of blood meal, bone meal (how have I accumulated 3 bags of this stuff I do not know) and green sand were sprinkled on top and worked in with shovel and hoe.

At last it was time to remediate the rhizomes! This is a multi-step process, determining where to snap and divide, trimming away the dead bits, cutting the foliage back to one-third of its length. The result: a large wheelbarrow full of greenery and rotten rhizomes and way too many healthy, viable rhizomes to fit comfortably into the prepared bed. 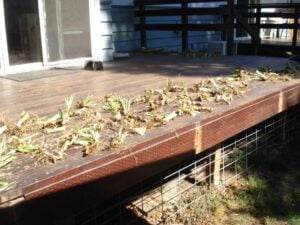 Yet somehow, it happened. Here is the culmination of six solid hours of effort: 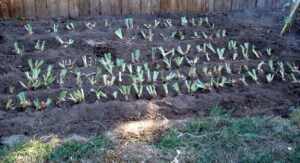 They look kind of close together.

Quiet, 9. I’m a bad gardener in that way. If something’s viable, I can’t stand to throw it out. You’ll notice the lilac stump in the photo. It doesn’t bother me aesthetically, I’m good with a rustic, casual look in all things. Still, it nagged at me. Something was missing.

After a well-earned Manhattan, it came to me. What was missing was a garden gnome. I posted this thought on Facebook and immediately drew staggering amounts of happy comments from people of all political persuasions! Are garden gnomes, perhaps, what we need more of these days?

Personally, I have never before desired a garden gnome. I’m not sure I desire one now but one of those guys, the plaster or concrete or composite person yet-to-be located, has had this planned from the start. So this Saturday- –

Do we get to do something fun, really?

It’s too serious for fun, 9. After we portray Nellie Gilliam Day (a significant Walla Walla personage, 1854-1940) for the history tour at Mountain View Cemetery- –

Lily, I appreciate your enthusiasm but curb it until I’m finished, okay? After we’re done being Nellie we’ll go on a quest. We will haunt as many home, garden and second-hand stores as necessary to find our garden gnome. Failing that, we will resort to the internet (though the gnomes I’ve seen there, some of them 8 feet tall, are pretty intimidating).

I think she’s too young to catch the joke.

Point taken, Lily. How about a gooey chocolate chip cookie from Colville Street Patisserie, or an ice cream cone at Klicker’s? Klicker’s has some yard decor items, too. Maybe the garden gnome waits for us there.

Please wish us luck. And if you’re thinking how funny it would be to flood the US postal system with hundreds of garden gnomes sent to my address, stop that immediately!

Remember, it’s really for the irises.