It Started with Ralph 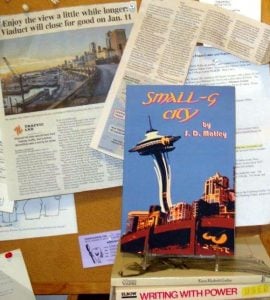 Ralph- -the character who pulled a book together! Pictured with his arch-rival, Clifford, and an article concerning the Alaskan Way Viaduct.

Authors are frequently asked: Where do you get your ideas? My answer: Everywhere. But sometimes the original idea is not what ends up on the page. Which brings me to Ralph.

Ralph is a character in Small-g City, my first book-length project accepted for publication. He entered the drafting process late. Without Ralph, there wouldn’t have been a story to tell.

Small-g City started as a short story, about a husband and wife on a particular day when they took a routine walk around the block. I could see the couple right away. They ultimately became the immortals Jim and Candy Smith. After fiddling with this idea for weeks? months? I sensed that the story was bigger than one city block and two immortals.

For many months I toyed with a plot line involving a repressed librarian and the owner of an underground night club featuring a talking portrait of Texas Guinan* (the portrait only talked to the club owner). Then I added a short guy who worked at a sidewalk espresso cart who had a crush on a tall girl who worked in a book store. Each idea was interesting in itself, but the larger story didn’t hang together as a meaningful whole. Whatever related the parts to each other was missing.

Through regional news reporting, the Alaskan Way Viaduct entered my thoughts. It’s a soon-to-be-gone fixture on the Seattle waterfront, a raised highway built in the 1950s, the then-answer to Seattle’s traffic and transportation problems. The Viaduct was built to handle 60,000 cars a day. For years, maybe decades, it has served over 100,000 cars per day. In the early 2000s, discussions had begun about either repairing the Viaduct (again) or replacing it with a multi-lane underground tunnel.

The story of the Alaskan Way Viaduct is worthy of a book all by itself. What struck me about the Viaduct’s then undecided fate, however, was the tendency for humans to build something, overtax it way beyond what it was intended to do, then demolish it and replace it with something prettier. I felt empathy for the poor, abused Viaduct, deteriorating from overuse and seismic activity. None of this was the Viaduct’s fault.

The Alaskan Way Viaduct needed a friend, a supporter. I made the role of supporter literal and created Ralph, an immortal specially trained to disburse his molecules into an under-engineered structure and reinforce it to ensure public safety. Ralph works for behind-the-scenes Olympus, Inc., the immortal-staffed corporation that keeps our mortal world running. He has quite a history of his own. His first assignment was in a section of what later became the Great Wall of China. He’s worked the Colosseum in Rome, the London Bridge in England (before it moved to Arizona). These were choice assignments. However, sometime in the early 20th century he pissed off Zeus, his boss. Hence, he was sentenced to serve in the Alaskan Way Viaduct. Worse yet, he was positioned with his back to the water view.

At the time of Small-g City (approximately 2010) Ralph is experiencing extreme job burnout, also paranoia because he sees and hears evidence of what is called “The Tunnel Option.” His frustrations are the fuel that makes the story and all its subplots burn as one.

Fast forward to 2018. “The Tunnel Option” is soon to be reality. The Alaskan Way Viaduct is scheduled to close for good on January 11, 2019. Honestly, it brings a tear to my eye. And what about Ralph? You can learn his fate in Small-g City and the sequel, Big-G City. You can find Small-g City and Big-G City here, or special order from your favorite local book store:

Ralph’s story continues in the third volume of the “G” series, Beyond Big-G City, due from WolfSinger Publications in late 2018/early 2019.

As for the Alaskan Way Viaduct. . .

*So you’ve never heard of Texas Guinan? You can read her colorful history here: